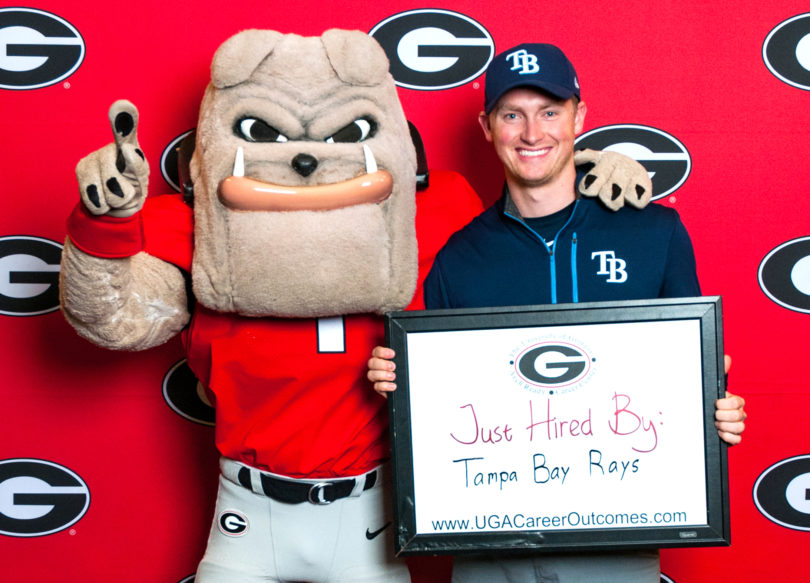 Taylor Smith earned a joint bachelor’s and master’s degrees in statistics, a bachelor’s in mathematics, and a certificate in data science. After graduating, he will work for the Tampa Bay Rays. (Mike Getchell Photography)

After Taylor Smith graduates from the University of Georgia, he’s headed to the Major Leagues.

He’s not an athlete; he’s going to be a research and development analyst for the Tampa Bay Rays. He will run statistics and use data science to help pick the best amateur draftees for the team. It’s a dream come true for a lifelong baseball fan, and a perfect fit for the skills he learned at UGA—where in May he will receive joint bachelor’s and master’s degrees in statistics, a bachelor’s in mathematics, and a certificate in data science. 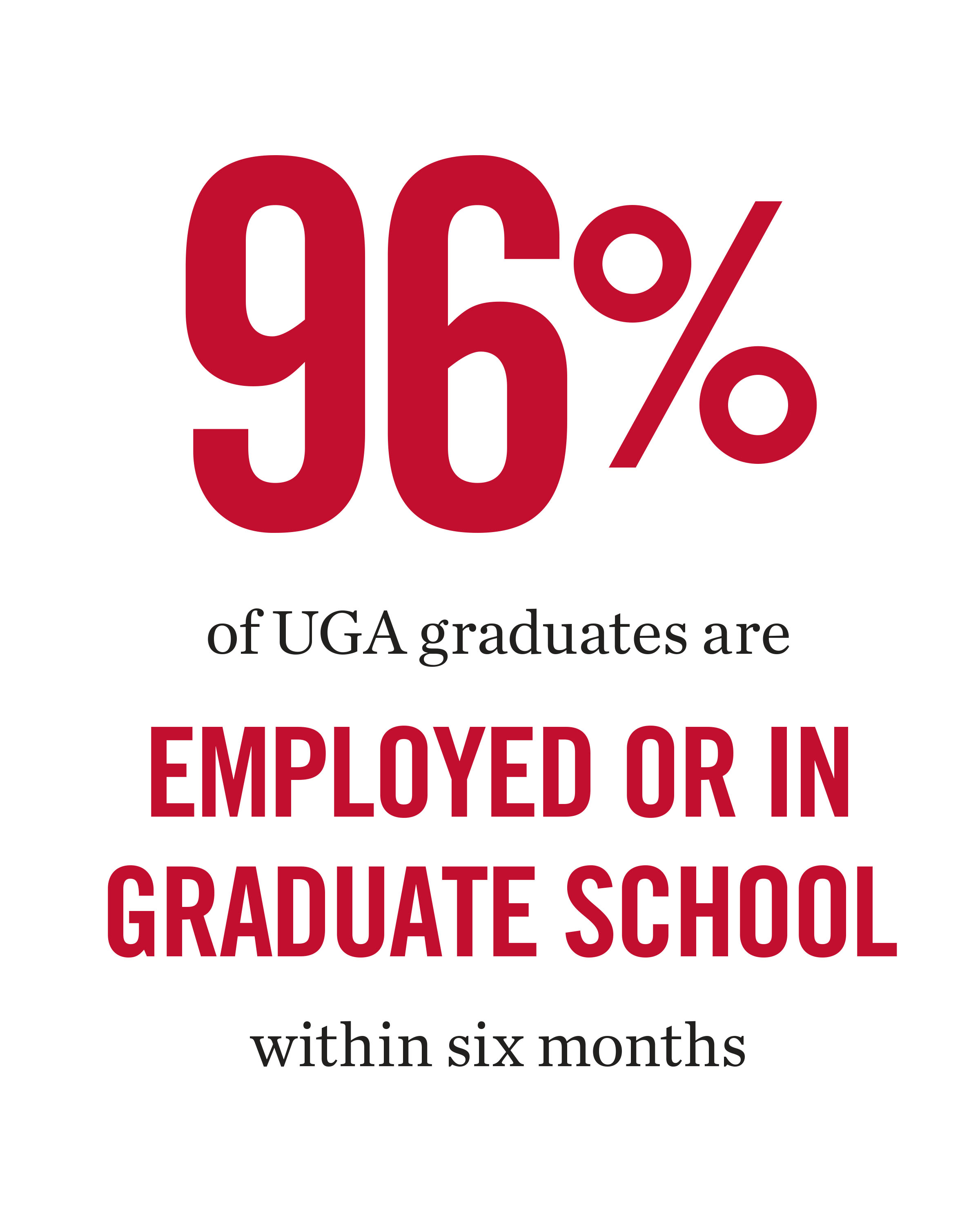 Smith, from Canton, is just one of an estimated 55 percent of UGA students who already have jobs lined up after they graduate in May. According to the UGA Career Outcomes survey, 96 percent of 2017 UGA graduates had a job or were enrolled in graduate school within six months of graduation.

In terms of landing a job, the timing is nearly perfect for Class of 2018 graduates, according to Jeffrey Humphreys, director of the Selig Center for Economic Growth in UGA’s Terry College of Business. “The economy is very strong. The unemployment rate is the lowest it has been in over 10 years. It’s definitely both a good time and a good place to graduate.”

The economy is so good that many graduates are receiving multiple job offers. “My advice is to grab a job while they are still plentiful,” Humphreys said. “And, if you have multiple opportunities, I recommend considering how that job will fare should the economy hit a soft patch.”

Employers are seeking out UGA students and graduates in record numbers. Last academic year, 14,605 jobs and internships were posted on the Career Center’s jobs website and more than 1,000 companies recruited at UGA either at the career fairs or in on-campus interviews, said Scott Williams, director of the UGA Career Center. This is about twice as many as at the low point in the recession in 2009.

UGA students are personable, articulate and get things done,” said Amy Evans, a recruiter and university relations leader at NCR, a hardware, software and electronics Fortune 500 company based in Atlanta. UGA is one of the top schools targeted by NCR.

“They also bring a different type of thinking and approach to NCR. Last summer there was a team of eight interns (including four from UGA) working on a software automation project. The diversity, not only in gender and backgrounds, but in problem-solving and approach made this team stronger. All of them learned the software automation and helped one another as they took manual tasks and automated them. Some of these tasks are completed hundreds of times a month to create some real savings for the company.”

NCR is hiring 21 UGA graduates this spring—roughly half with full-time job offers and half with internship offers. Specifically, NCR recruits heavily from UGA’s MIS program, as well as from finance, marketing and computer science.

Career fairs are important connectors for employers and students.

For Sarah Feyerick, a job fair at UGA made all the difference.

“I was a sophomore with absolutely no idea what I was doing,” said Feyerick, who is now a civil engineering major working for DPR Construction out of Atlanta. “I went to a career fair and had heard a lot about DPR from my classes and knew I wanted to talk to them. It was essentially a first interview. I had my first official interview two weeks later in February of 2016 and had a summer job lined up the next week.” 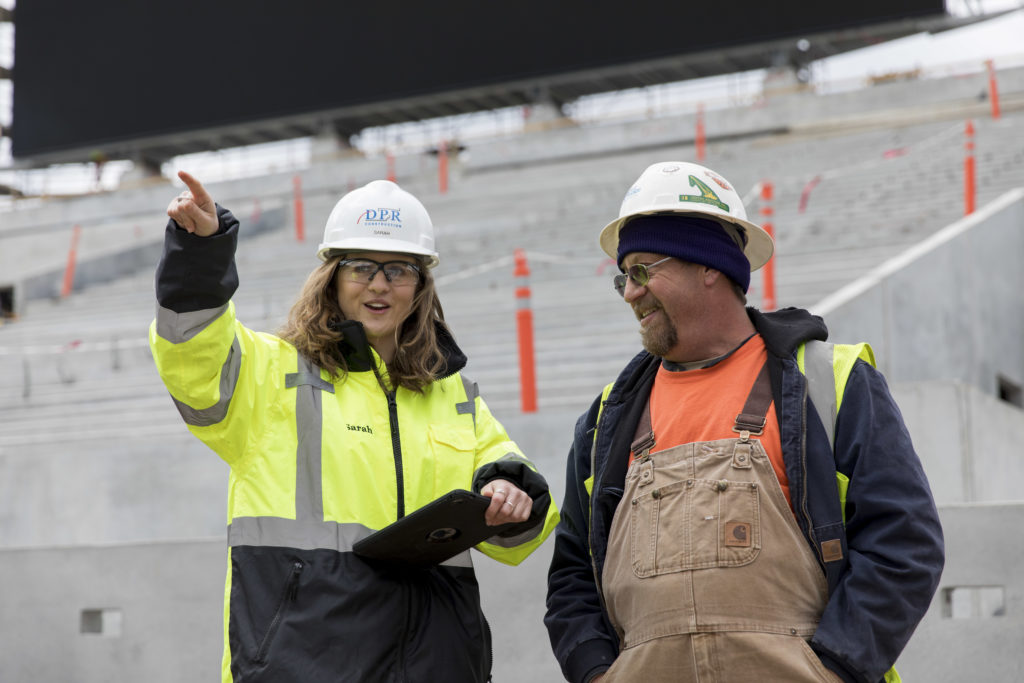 Feyerick, who didn’t have an interest in construction at the time, worked with DPR on the UGA William Porter Payne and Porter Otis Payne Indoor Athletic Facility construction project. Her summer job turned into a part-time job during the school year, and now she’s worked for the company for two years.

I found myself really fitting in with the culture of the company and the industry. I loved the project management and critical thinking as opposed to the number crunching of engineering. I loved getting to go outside and look at the construction progress.”

After she graduates, Feyerick, who is originally from Jacksonville, will become a project engineer for DPR in San Diego. “Some days I’ll just be handling paperwork,” she explained. “Other days it will be fast-paced and solving problems when something goes wrong in the field. The best way I can describe it is that it’s all a puzzle. Engineers create the pieces of the puzzle and the contractor puts them together. Sometimes they fit perfectly, other times it’s a 2,000-piece puzzle and none of the pieces seem to fit. My job is to help put those pieces together and make sure it gets done on time and on budget.” 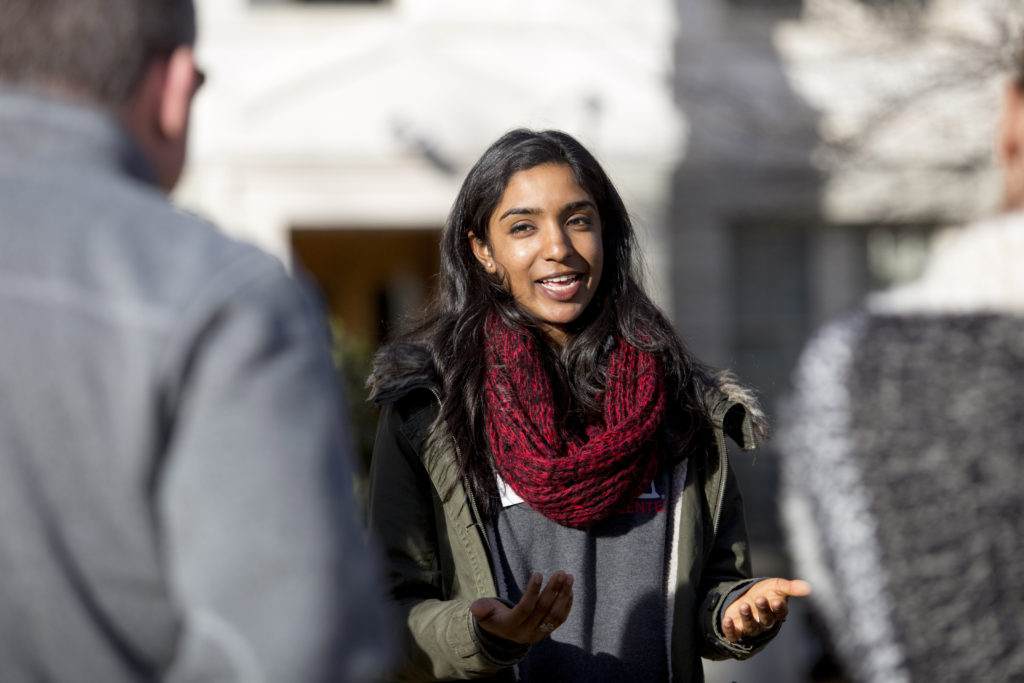 Economics major Shreya Ganeshan has interned for the U.S. Department of State and Athens-Clarke County and has been hired by Google as an associate product marketing manager.

Senior Shreya Ganeshan, an economics major from Johns Creek, will be heading to Google to work as an associate product marketing manager. At her Google West Coast office, she’ll perform competitive analyses and data analytics. She credits her experiential learning opportunities at UGA with getting her there. 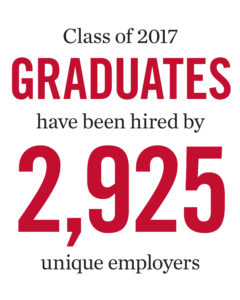 During summer 2016, she interned at the U.S. Department of State’s Office of the Special Envoy Change through the UGA Honors in Washington program. She is currently working part time as an energy analyst for Athens-Clarke County Unified Government where she creates energy consumption profiles for county buildings and works with local contractors on energy efficiency projects like solar installation on county buildings.

She knew she wanted to work for Google and kept an eye on the Google careers webpage. After reaching out to UGA alumni and former colleagues for referrals, she said the recruiting process went from September to December 2017.

Applying for jobs in tech and on the West Coast gave me a greater appreciation for the UGA alumni community,” she said. “I received mentorship and guidance from so many older colleagues, some whom I had not even met during my time at UGA. I definitely would not have gotten a job without their support. I cannot wait to pay it forward.”