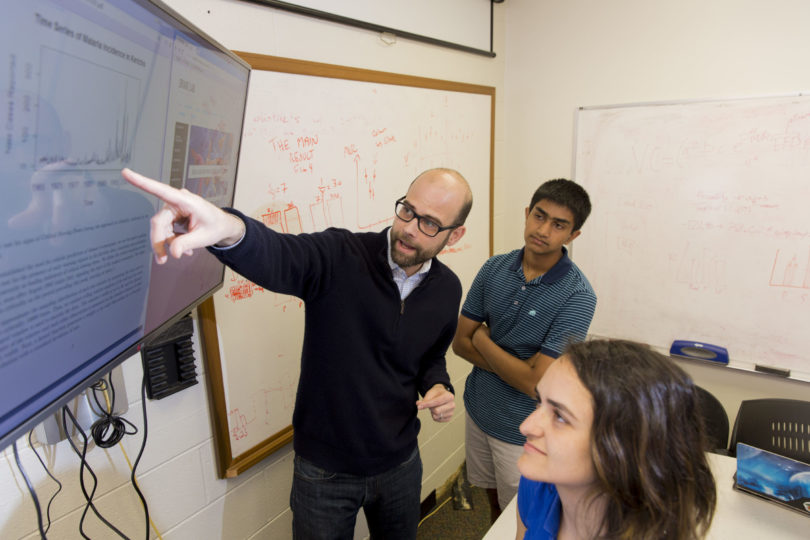 John Drake, director of UGA's Center for the Ecology of Infectious Diseases, talks about his research with students. (UGA photo)

Disease models could change the way we prepare for and combat infectious disease outbreaks like the coronavirus that originated in China, according to John Drake, Distinguished Research Professor of Ecology at the University of Georgia and director of its Center for the Ecology of Infectious Diseases.

Below, he shares some of his thoughts about the current outbreak and how disease modeling can help manage the spread of infectious diseases.

How do disease models help us track and predict what might happen during an outbreak?

“A model can’t tell you anything that you don’t already know about the world. It can be useful for understanding the information you have, to put it into context and to extrapolate.

“So, for example, early on in an epidemic, we have very little data, but we have a lot of questions about what might happen. In the case of the recently circulating coronavirus, many scientists have looked at related viruses like SARS and MERS and said, ‘Well, what if this virus spreads in the same way? What might the pattern of spread look like?’

“Of course, the quality of the information that we get from models depends hugely on the quality of that data we use for calibrating and fitting the models. That’s why at this stage of the outbreak there’s still so much uncertainty about what might occur.”

A number of organizations have reported something called an R0 in relation to the coronavirus. Can you explain what this term means?

“So you’ll often see numbers between say one and four for an acute infection like this. In some infectious diseases it’s even higher. An R0 less than one is for a virus in a population that can’t sustain itself through human-to-human transmission. In contrast, any time that you have an  R0 that’s greater than one, you have the potential for an outbreak. The higher the  R0 the larger the potential outbreak and the faster that it spreads.

“There are a lot of features in outbreaks that are not captured by R0 , however. So, for instance there can be variation from one person to another in the number of secondary cases they transmit to, based on what their social contacts are like. In SARS, for instance, we became aware of so-called ‘super spreaders.’” These are individuals that by virtue of their behavior, and perhaps their particular pathology and symptoms, can give rise to a very large number of secondary cases.”

Are you concerned that the current coronavirus outbreak could turn into a pandemic?

“We have already seen internationally imported cases arising in many countries, and human-to-human transmission in countries outside of where the virus originated. Is there a potential for widespread transmission? Certainly there is if we’re not successful in containing it.

“The key in containment is to reduce the reproduction number — the effective number of secondary cases that arise from any infected case that might move to a new location — to reduce that below one. And we do that by rapid interception, by encouraging people who find themselves sick to report to a clinic or hospital, by rapidly identifying those patients that are ill with this particular disease and treating them both in isolation so that they don’t transmit the infection to other people. And to ensure that they receive the care that’s required for them to full recover.”