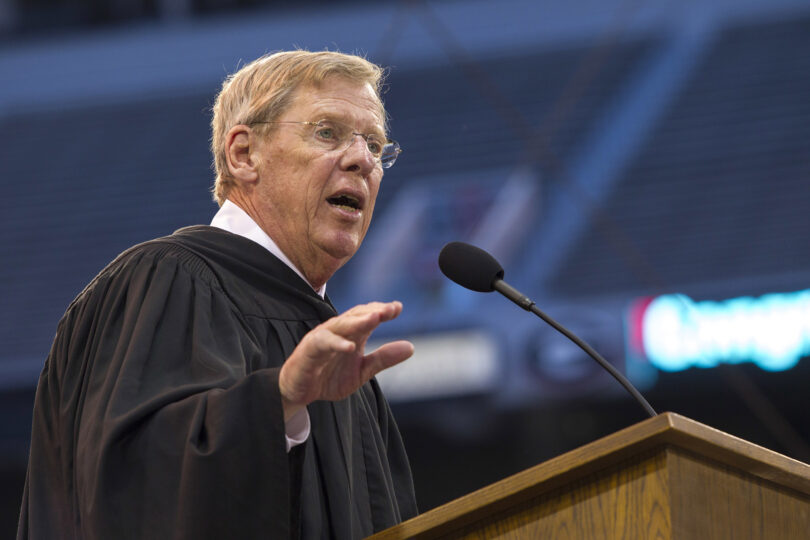 From his service in the Georgia General Assembly to his work in the U.S. Senate, Isakson was known for his collaborative approach, collegiality and passion for public education and foreign affairs. Fellow public servants throughout the nation and across the political spectrum praised Isakson for his lifelong commitment to building bridges. 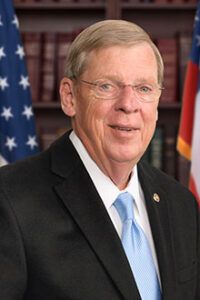 “Johnny Isakson will be remembered as a true statesman and a dedicated public servant who made a positive and lasting impact on our state, nation and world,” said University of Georgia President Jere W. Morehead. “He also was a loyal Georgia Bulldog who made us all proud to be fellow graduates of the University of Georgia. We are deeply grateful to Senator Isakson for his service, and his passing is a significant loss for our state.”

Isakson resigned his Senate seat Dec. 31, 2019, citing health problems. He was diagnosed in 2015 with Parkinson’s disease. In February 2021, the university’s campaign to create the John H. “Johnny” Isakson Chair for Parkinson’s Research and Georgia Research Alliance Eminent Scholar position reached its goal of $4.5 million in private commitments, with the final contributor being Isakson himself.

“We will continue to honor Sen. Isakson’s life and memory through our work to find a cure for Parkinson’s disease,” Morehead said.

Isakson received his Bachelor of Business Administration in 1966 from the University of Georgia and the next year joined Northside Reality in the Atlanta area, becoming its president in 1979. He was involved in the real estate industry for more than 40 years.

Throughout his time in public life, Isakson cemented a legacy of integrity, bipartisanship and steadfast dedication to his constituents.

“Georgia has lost a giant, one of its greatest statesmen, and a servant leader dedicated to making his state and country better than he found it,” said Gov. Brian Kemp. “Johnny Isakson personified what it means to be a Georgian. His work to champion our veterans, deliver disaster relief for Georgia farmers after Hurricane Michael, and always stand up for Georgia’s best interest in the U.S. Senate will live on for generations.”

“U.S. Sen. Johnny Isakson will go down in history as one of the greatest senators from Georgia. Many will remember Johnny for his statesmanship and his many legislative accomplishments, but I will remember him as simply my best friend,” said UGA classmate and former Sen. Saxby Chambliss. “We met at the University of Georgia 59 years ago and had the pleasure of serving in Congress together for 16 years. We were friends early on but grew to be best friends while working closely together on behalf of our state and our country.”

Isakson also has the distinct honor of being the only Georgian ever elected to the state House, state Senate, U.S. House and U.S. Senate. In the U.S. Senate, he championed a number of bills to improve services to veterans through the Department of Veterans Affairs as well as the Kate Puzey Peace Corps Volunteer Protection Act, among many other legislative achievements.

“In his decades of public service in our home state Johnny developed a great reputation as a bridge builder, a man who has strong belief but also willing to work with others to get things done,” said the late Georgia Congressman John Lewis upon Isakson’s retirement. “Those of us who know you will agree that you are always thoughtful and mindful, a warm and welcome gentleman in the truest sense of the word. For two decades, you led a team that could cross the aisle without compromising your values,” Lewis said.

In 1999, he was elected to the U.S. House of Representatives representing Georgia’s 6th District. He won election to the U.S. Senate in 2004. When he retired, he was chairman of both the Senate Ethics Committee and the Senate Veterans’ Affairs Committee, at the time the only Republican in the Senate chairing two committees.

Isakson was a loyal UGA alumnus, hiring UGA students as interns and graduates as staffers. He returned to campus frequently, speaking at the university’s 2014 Commencement ceremony, the 2011 Getzen Lecture on Government Accountability, and the 2009 dedication of the Vince Dooley Complex.

In 2014, Isakson encouraged UGA graduates to, “Dream the impossible dream.”

Isakson was married to Dianne Davison, who is a UGA alumna. He is also survived by three children, all UGA alumni — John earned his M.A. in 1994, Kevin graduated with a B.A. in 1995, and Julie Mitchell earned an A.B.J. in 1999 — as well as eight grandchildren.