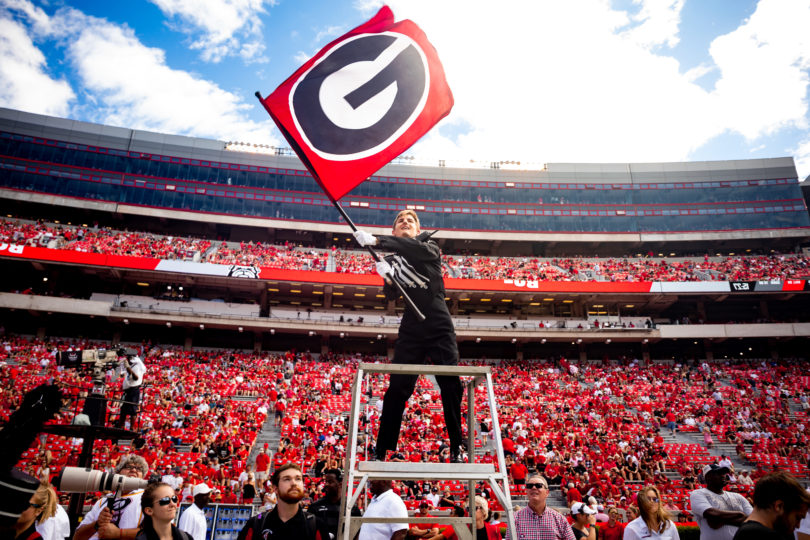 Josh Clifford will give the undergraduate Commencement address May 10. He was drum major for the Redcoat Band in 2018. (Photo by Cathy Marszalik)

For Josh Clifford, the key to success at the University of Georgia was stepping outside his comfort zone and getting involved.

It’s the message he’ll give graduates May 10 when he delivers the undergraduate Commencement address.

He’s both excited and nervous about the speech but said he looks forward to urging others to help change the world.

“UGA encourages you to take steps outside of your comfort zone, and it provides such a loving atmosphere that you’re able to succeed, not just in the classroom but outside as well. I feel like I am happy as I am today with my college career because of that,” Clifford said.

At UGA, Clifford was a member of the Redcoat Marching Band. Last fall, he was named one of the band’s drum majors. “Which was really one of the highest honors I’ve had here,” he said. “Leading a group of 400-plus musicians is incredible. Every time I stand in front of the band to conduct I am absolutely in awe at the sound they produce and the joy that it gives for so many UGA students and fans.”

“Before I was anything else on campus, I was a Redcoat,” he said. “I wanted to be a drum major for the Redcoat Band because I wanted to give back to an organization that truly sparked every ounce of my involvement and success. Especially for the freshman who have three more years of Redcoat’s magic!” 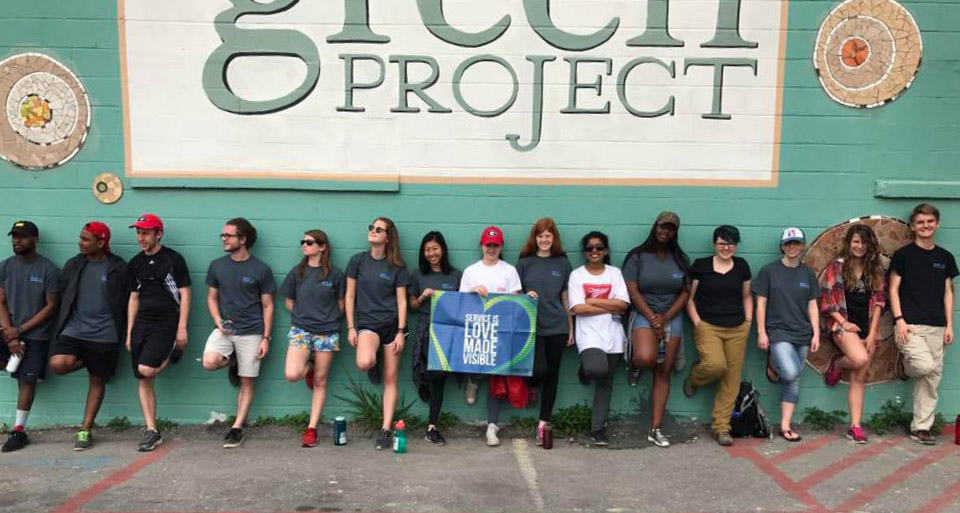 In 2017, Josh Clifford’s IMPACT group volunteered at an organization called The Green Project in New Orleans. Clifford is on the far right.

In addition to the marching band, Clifford is also involved with IMPACT UGA, a spring break trip where students volunteer in communities across the U.S.

He was originally reluctant, but during his freshman year he signed up to go to Jackson, Mississippi. There he performed 40 hours of service related to disability awareness and advocacy with 15 total strangers.

“I had the most personal growth in one week, and that set the stone rolling for me wanting to get more involved,” he said.

As a sophomore, he was a site leader, planning a trip to New Orleans, Louisiana. Clifford led a group of 16 students with a co-site leader in service focused on environmental justice. For the last two years, he’s served on the executive board as the outreach coordinator, where he oversaw the planning of the trips, conducted marketing and recruited people.

“I just feel like it is one of the most transformative experiences UGA has to offer. Because you really don’t know how to serve or how you can benefit the world until you realize your own privileges and your identity and what context you fit in,” he said. “For me, IMPACT really showed me I can serve and volunteer and advocate for causes I’m passionate about, and I can do so in the context of what my career ends up being. It’s a really great opportunity: one, to step outside of your comfort zone, and two, to learn about really important issues and how you can be involved and help and how you can apply the ideas of service to whatever you do.”

Clifford was also on UGA’s Homecoming Court in 2018, nominated by IMPACT UGA.

“It was an incredibly cool experience, and I was so humbled,” he said. “I especially remember walking through Dawg Walk, which was very surreal for me, because being in band, I’m on the outside of Dawg Walk all the time.”

Initially, Clifford started out as an engineering major, but the field wasn’t for him.

In high school, he had taken an AP geography course that he really liked. An advisor recommended he take the Intro to Geographic Information System class. For him, the class confirmed that’s what he wanted to do.

The first semester of his junior year, he added another major in comparative literature, as he’d always loved reading and writing.

His geography and comparative literature majors led him to work as a junior fellow at the Library of Congress last summer. One of the projects the library works on is a literary mapping project. In the 1990s, the library had a literary maps project to showcase a state’s literary heritage with either fictional events or nonfiction information. Clifford took the cataloging records the library had and converted them to a GIS platform. This platform would present the information more precisely and allow high school students to create their own literary maps as projects.

“I was thrilled. I had the best summer of my entire life,” he said. “Walking into the Library of Congress every day was a dream. It was so much fun.” 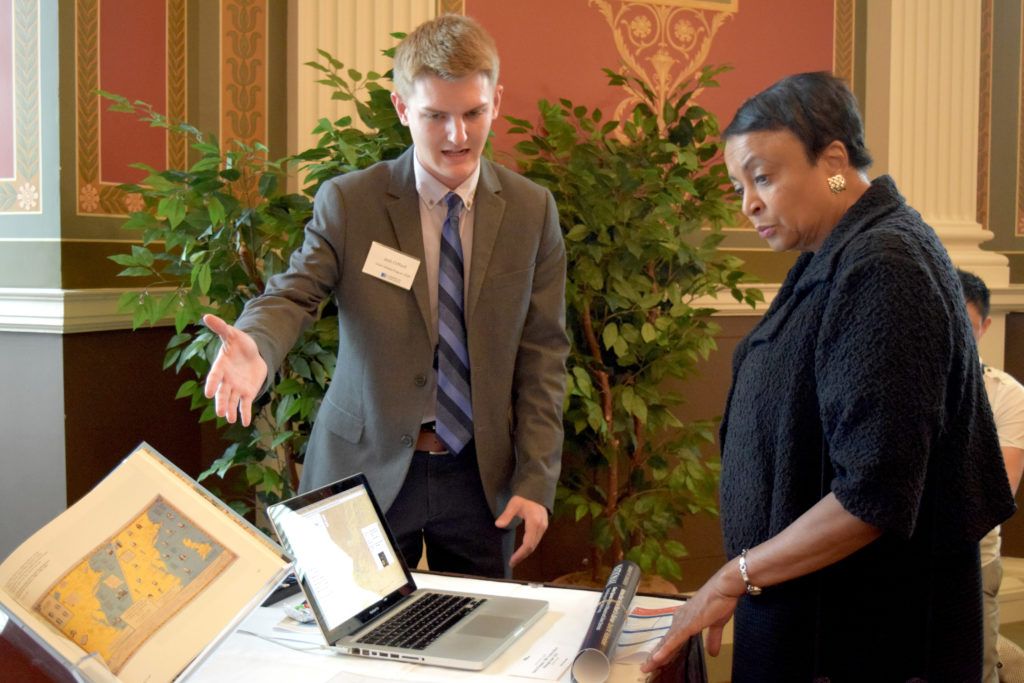 Josh Clifford presents his literary maps project to Carla Hayden, the Librarian of Congress, in 2018.

This summer, Clifford will be working as an intern at Esri, a GIS company in Portland, Maine. As an intern, he will be able to shadow different teams, do technical writing and perform software development and product testing.

“I’m really excited about it. It’s a really great company for this field,” he said. “I’ve never been to Maine before. I’ll be right on the coast in Portland, so lighthouses, lobsters, the whole nine yards.”

Currently, he works at the UGA Visitors Center. He does one to two desk shifts a week and leads one to two tours a week, telling 30 to 60 strangers about UGA and his experiences.

“Giving campus tours has been so incredible because I get to comfort so many high school students (and parents) who are terrified and concerned about their college future,” he said. “I remember being in their exact shoes. I remember the mistakes I made in college that I wish someone had told me not to make. I find it so rewarding to be able to make connections with these students who go on tours because I am able to offer them a little bit of wisdom on the college experience.

“I tell my prospective students that, while I’d love for them to be at UGA, they will be able to find happiness in whatever college they go to so long as they take steps outside of their comfort zones and commit to being authentically themselves for the next four years.” 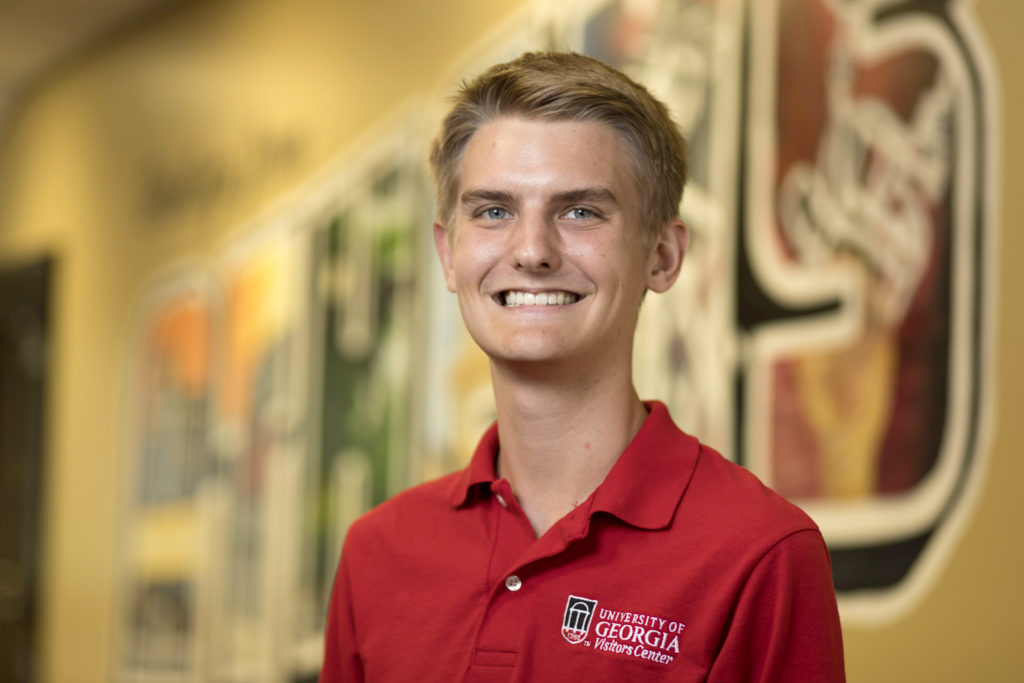