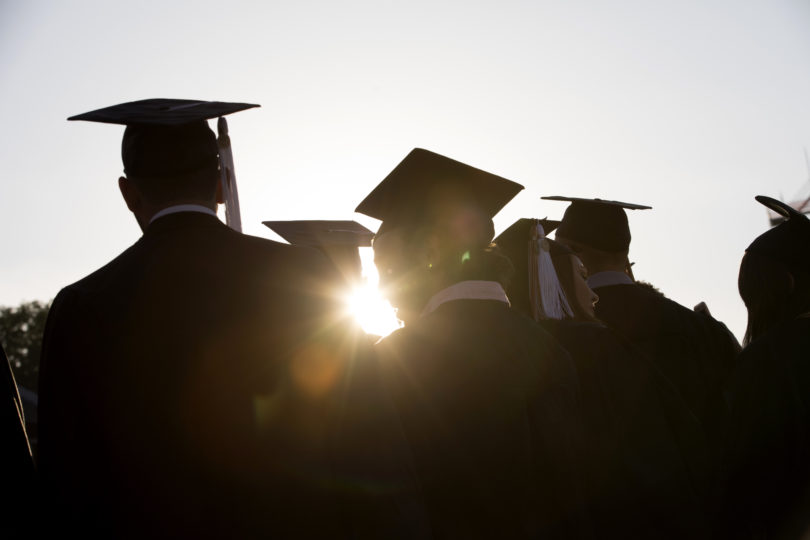 More than 6,950 students eligible for graduation

The University of Georgia will welcome its newest alumni on May 10 as 5,697 undergraduates and 1,265 graduate students—for a total of 6,962—have met requirements to walk in the university’s spring Commencement ceremonies.

The undergraduate ceremony is scheduled for 7 p.m. in Sanford Stadium, and ABC News correspondent and UGA alumna Deborah Roberts will give the address.

Since graduating from UGA in 1982 with a degree in broadcast news from the Grady College of Journalism and Mass Communication, Roberts has risen through the ranks of television news, received numerous awards and been a regular reporter and contributor for programs such as “Dateline NBC,” “20/20,” “Nightline,” and “Good Morning America” to name a few.

Roberts joined ABC 20/20 in 1995. Since then her curiosity has taken her around the world, from Bangladesh to report on women’s maternal health to Africa where she has traveled extensively, telling stories about the HIV/AIDS crisis and an Emmy-winning report on a woman who discovered her long lost mother in an African village. Roberts has won numerous awards for her work including a Clarion award for coverage of abuse within the Amish community.

In 2006, Roberts delivered UGA’s Holmes-Hunter lecture, and in 2016 she presented an Alumni Seminar. Earlier this year, she participated in a panel discussion entitled “Grady Greats: A Conversation on the Enduring Values and Power of Journalism.”

The student speaker for the undergraduate ceremony will be Joshua Clifford who will receive bachelor’s degrees in geography and comparative literature.

Fifty students will be recognized as First Honor Graduates during the undergraduate exercises for maintaining a 4.0 cumulative GPA in all work attempted at UGA as well as all college-level transfer work prior to or following enrollment at the university.

An estimated 211 doctoral candidates and 1,054 master’s and specialist degree students will be eligible to walk in the graduate ceremony at 9:30 a.m. in Stegeman Coliseum. Loch Johnson, Regents Professor of Public and International Affairs, will address the graduates and guests.

Johnson, who will retire at the end of the spring semester after more than 40 years at UGA, is a Regents Professor of Public and International Affairs and Josiah Meigs Distinguished Teaching Professor.

He’s an accomplished scholar in political science, with numerous awards for his teaching prowess and research. During his career, Johnson authored more than 30 books and over 200 articles on intelligence agencies, foreign policy and national security.

At UGA, Johnson has been involved in both local and national politics, including writing Friend of the Court petitions in intelligence-related court cases, serving as a member of the Georgia State Board of Elections and leading the SPLOST campaign to finance a new Cedar Shoals High School and renovate public schools throughout Athens-Clarke County.

The clear bag policy will be in effect for both ceremonies.

Because Commencement falls on a Friday, a routine UGA workday, parking patterns on South Campus near the coliseum will be adjusted.

For the undergraduate ceremony, disability parking is available at the East Deck and North Deck. An ADA accessible shuttle will be available from those areas to the stadium. The Tate Deck and lot E12 are reserved for designated participants by permit only. All other parking on campus will be free on a first-come, first-served basis.

The ceremony will be streamed live online at commencement.uga.edu.