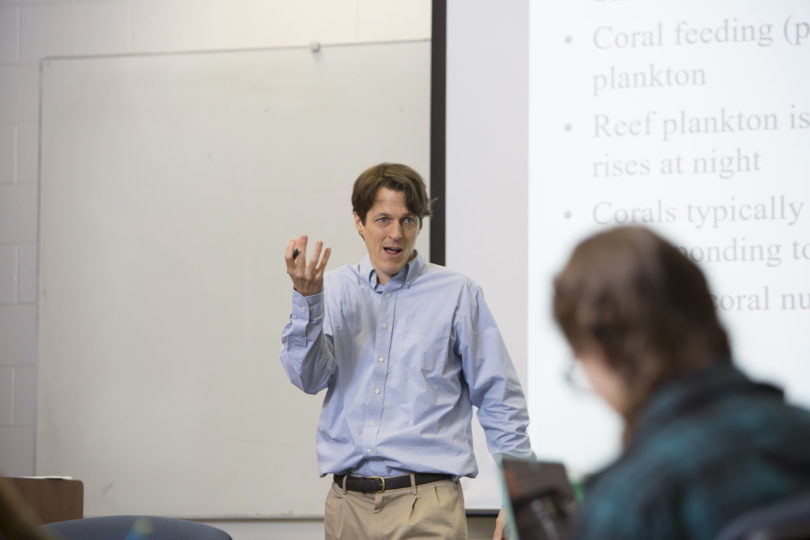 Five faculty members will be honored as Meigs Professors April 17 at the 2017 Faculty Recognition Banquet at the Georgia Center. The professorship is the university’s highest recognition for instruction at the undergraduate and graduate levels. Meigs Professors receive a permanent salary increase of $6,000 and a one-year fund of $1,000 for academic support.

“It is insufficient to talk about a subject,” he said. “Students must experience it.”

Whether teaching a 200-person lecture course, mentoring an undergraduate ecology major or advising a doctoral student, Byers puts this philosophy into practice, and students respond. Their experience might be in the form of a field trip, a laboratory experiment or a classroom exercise where they play the role of a pregnant barnacle that must develop strategies for maximizing the survival of larvae—but the result is transformative.

Byers, a marine ecologist, joined the Odum School in 2008 after seven years at the University of New Hampshire. Shortly after arriving he became graduate coordinator, a position he held until 2016. In that role, he led a revision of the graduate curriculum and introduced a new graduate seminar course in cross-disciplinary ecology.

Under his watch, Odum School students received 14 NSF Graduate Research Fellowships—36 percent of those received at UGA, the highest percentage of any unit on campus.

Furthermore, all 12 of his completed doctoral and master’s students—he is currently advising five more—have gone on to land competitive jobs at institutions like Boston University, the University of Washington and NOAA.

Even while serving as graduate coordinator and running a successful research program, Byers has had a major impact on undergraduate education. He teaches courses in ecology and marine biology, including an Honors course, Ecosystems of the World, and a First-Year Odyssey Seminar, Ecology of Invasive Species, that he developed. He is a core faculty member in the NSF-sponsored Population Biology of Infectious Diseases Research Experience for Undergraduates program at UGA, has advised 15 Honors students and mentored more than 60 undergraduates in directed research.

Byers also has shared his teaching methodology with UGA colleagues, co-facilitating a popular Faculty Learning Community, “Nexus Classroom: Where Teaching and Research Coalesce,” through the Center for Teaching and Learning in 2014-2015.

“Full immersion and engagement empowers students,” Byers said. “It also invigorates me and continues to intensify my passion for teaching.”

If a phrase could accurately describe the effect of Markus Crepaz’s teaching, it would be: a transformative experience. Crepaz makes his students active participants in the learning process.

In 2008, Crepaz co-created the Stellenbosch Study Abroad program in South Africa. It is a program that students credit with changing their lives as well as their passions. Under his leadership, Crepaz helped to set up a partnership with the organization Vision Afrika that allows students to interact with children in an after-school program in a nearby township as part of their required coursework.

This community engagement is the heart of experiential learning as it allows UGA students to catch a glimpse into the challenges South Africa has faced in trying to overcome apartheid. This Politics of Development course brings to life issues such as poverty, income inequality and racial discrimination that otherwise may seem like abstractions in the lecture halls at UGA.

“Making personal connections, establishing meaningful relationships and employing all senses is what experiential learning is all about,” said Crepaz. “Being there with the students at this nexus between their experiences and my teaching makes me an interpreter of their daily observations. It is perhaps my favorite part of teaching. When personal experience triggers a desire for wanting to understand, teaching becomes a collective endeavor that weaves seamlessly between theories, observations and practice.”

Crepaz constantly challenges his students’ world views and presses them to eliminate personal bias by looking at the world with depth and applying what they’ve learned to the outside world, something his students appreciate both abroad and in the classroom.

“I can’t emphasize enough the impact [Crepaz] had not only on my education, but also on my world view and ambition … when I came home from South Africa that summer, I returned with a newfound passion for human rights and development; since then it has been my goal to advocate for those limited by the often inescapable cycle of poverty,” said Sydney Stringer, a 2011 Stellenbosch participant.

Similarly, students have experienced Crepaz’s engaging, passionate teaching style on campus in courses such as his upper division Politics, Film and Literature and graduate research design courses. His challenge for students to see past the obvious is posed within the classroom, often asking questions such as “so what?” and “what’s the puzzle?” earning him the affectionate nickname of “Dr. Crepuzzle.”

Students in John Maerz’s First-Year Odyssey seminar courses in animal behavior and herpetology quickly discover that learning is a “participatory sport” in his classroom.

Maerz has been teaching for more than a decade, and in that time, he realized the more memorable he can make a particular lesson, the more ingrained it will become in his students.

“Learning is just memory,” Maerz said. “If you learn something briefly and don’t reinforce it, that memory will wither and die. But if we take that and we either practice it repetitively or make it highly memorable—so memorable that you remember that day you learned something because it was so out of the norm—then that memory is reinforced.”

“Whether you (are) searching for plastic lizards in Whitehall to learn about calculating population estimates, drawing anurans (tailless amphibians) in class to think about how form tells about function or writing your own key to turtles of Georgia, he never simply lets his students sit back and listen,” said Theresa Stratmann, a former student who is now pursuing her doctorate.

Maerz is the kind of professor who is immortalized in movies and television shows but rarely exists in the real world, Stratmann said. His classes are challenging for students, with some syllabi warning that his classes will require much out-of-classroom work and more writing than might typically be expected in a science course.

“Writing is such a fundamental skill; it’s a way of thinking through problems,” Maerz said. “Writing forces you to condense your ideas, line them up logically and defend them with clear evidence.”

“I never see my class as the end all, like you’re going to learn how to do X here,” he said. “What I’m going to do is give you a foundation, get you thinking about it and get you excited about it.”

Maerz is more than just a teacher for his students. He’s a mentor who helps them discover their passions and instills the confidence they need to achieve their goals.

“If you find something that feels really intuitive to you, really gets you excited and you seem to understand it more than your average bear would, then go farther with it,” Marez said. “Pursue it.”

The term finance does not adequately cover what ­Annette Poulsen, the Sterne Professor of Banking and Finance, teaches to her students every day. Far beyond textbook problems, Poulsen is a dedicated instructor whose lessons delve into critical thinking and distill complex issues down to their core.

“Dr. Poulsen’s impact on me was not confined to the four walls of Brooks Hall or the syllabus. She had an exceptional way of relating to and inspiring her students,” wrote former student Morgan McCorkle Redd. “Not only did I begin to keep up with financial news, gain an interest in case studies around my degree and get honest advice about my career—I also ran my first marathon, in part because of professor Poulsen.”

Poulsen’s supportive demeanor, good advice and availability outside the classroom made the deepest impression on students—from First-Year Odyssey freshmen to doctoral candidates.

Her capacity to inspire students and her confidence in their abilities are a constant refrain in her teaching evaluations, as is her hallmark of drawing examples from current events that relate to the course material.

Poulsen’s commitment to student learning runs deep. Since she began overseeing the $1.4 million Student ­Managed Investment Fund, the program utterly transformed from a professor-led exercise to a groundbreaking experiment in business pedagogy.

“Instead of lecturing and controlling the course, she innovatively passed the baton to student leadership, empowering them to lead, organize and conduct the normal course of business. That led to an amazing breakthrough in the learning experience that will forever set this program apart from others in the country and, more importantly, impact every student who has the opportunity to experience SMIF,” said former student Mitch Reiner.

Poulsen has developed new and interesting courses to serve students across a variety of platforms. She created a new course for Terry students studying abroad in China that focused on cultural understanding and China’s nontraditional market economy. For the Terry@Oxford program, she incorporated extensive writing work into her class to reflect the kind of coursework done with Oxford tutors.

She also was instrumental in developing the college’s first hybrid MBA program, taught some of its first Executive MBA students and was a leader in designing the first Online MBA program at Terry and has helped develop courses for the Online BBA program as well.

Karen Russell begins each new session of her Online Reputation Management course discussing the difference between reputation and character. She is well qualified to lead this conversation considering that she has a powerhouse online reputation that frequently lands her on lists of top Tweeters. More importantly, her character as a professor makes lasting impacts on her students who stay in touch years after their studies and influences public relations educators and professionals alike.

Russell not only inspires her students, but she also has had a major impact on the field of public relations education, too. She authored one of the first blogs in the industry, “Teaching PR,” and recently wrapped up six years editing The Journal of PR Research, a journal for PR theory development.

Russell’s teaching also influenced Marie Hardin during her doctoral studies at Grady College. Hardin serves as dean of the College of Communications at Penn State.

“Dr. Russell is a deeply caring and engaging teacher who seeks to connect her material to students,” Hardin said. “She focuses on learning and on making knowledge relevant and accessible. She asks students to participate in the learning process, and she holds them accountable for doing so.”

Cory McCollum, a 2011 graduate, echoes those themes of engagement and self-learning. “There was a feeling that you were walking into a living room more than a classroom,” McCollum said. “Learning from Dr. Russell throughout the entire semester felt like a conversation. It was like she had tricked me into learning. How wonderful is that?”

Russell, who has taught at Grady College since earning her doctorate in 1993, said the ever-changing field and classroom conversations keep her motivated. While she hopes to prepare her students professionally, she also hopes some of her classroom lessons become life lessons.

“It’s about collaboration and teamwork-that’s how it actually works in the real world,” Russell said. “Invariably a student will complain that so-and-so didn’t pull their weight. My standard response is ‘life is a group project.’ There aren’t very many things that they are going to do where they aren’t going to depend on other people doing their part, as well.”