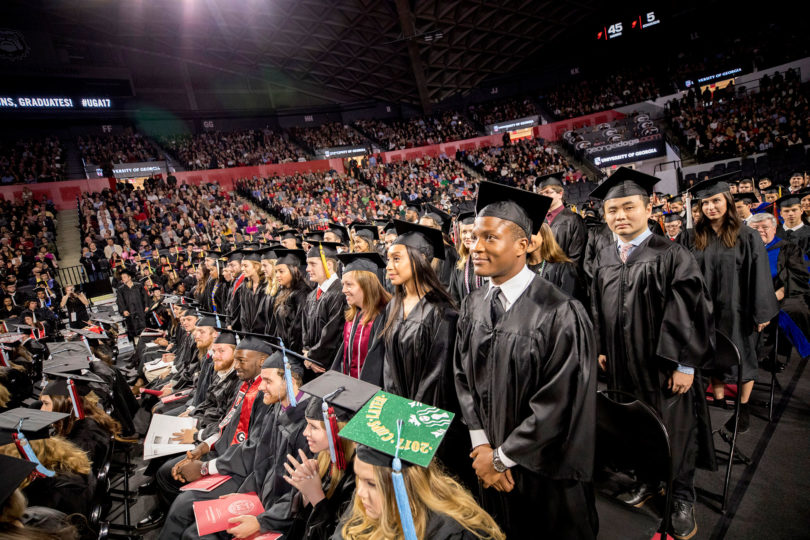 More than 2,800 students became UGA alumni Dec. 15 during graduation ceremonies in Stegeman Coliseum. Above: A row of graduating students stand waiting to turn their tassels. (Photo by Dorothy Kozlowski)

Commencement speakers encourage graduates to take advantage of every opportunity

President Jere W. Morehead offered his congratulations to the fall 2017 graduating classes with a caveat: Although the students should be proud of all they’ve accomplished at UGA, their work is really only just beginning.

More than 1,700 undergraduates and 1,100 graduate students were eligible to walk the stage Dec. 15 during the fall Commencement ceremonies at Stegeman Coliseum.

“You go forth today as an ambassador of the birthplace of public higher education in America, our country’s first state-chartered university and now one of the nation’s most prominent land-grant institutions,” Morehead told the newest UGA alumni.

“You are a steward of a 230-year ­tradition of teaching, research and service,” he also said. “You are leaving here with a capacity to shape the future of your community, this state, this nation and indeed the whole world.”

At the undergraduate ceremony, Steve Wrigley, chancellor of the ­University System of Georgia, encouraged students to act selflessly and spend more time seeking to understand others.

“That is how you will find ­satisfaction in life,” he said. “You’ll find meaning by making the deeds of family, friends and society a higher priority than your own. If you find yourself unhappy, look outward, not inward, for the fix.”

Students also heard from fellow graduate Samuel Alberto Peraza, who received a bachelor’s degree in public relations at the undergraduate ceremony. The first in his family to graduate from college, Peraza attributed his success to his mother, Elvira Libier Godoy Sanchez.

“My hope is that one day I’ll be able to give you the life you deserve,” he said, “because you have devoted your entire life to your children, our family and ultimately my education.”

Eleven undergraduates were recognized as First Honor Graduates, meaning they maintained a 4.0 cumulative GPA in all their courses at UGA as well as in any transfer work prior to or during enrollment at the university.

At the graduate ceremony, students heard from Lisa Nolan, dean of the College of Veterinary Medicine and a fellow UGA alumna.

A degree from UGA opened countless doors for Nolan, and she encouraged the graduates to be open to all possibilities, even those for which they think they aren’t suited.

“Destiny has plans for you other than the ones you’re making,” Nolan said. “Certainly, that was true for me.”

After earning three advanced degrees from UGA, including her doctorate of veterinary medicine, Nolan received a job offer at a university.

But she wasn’t even sure what state that city was in and had to look it up: Fargo, North Dakota. That job launched her career in academia and taught her an invaluable lesson she shared with the graduates.

“When you make an important decision, go all in … Lives and careers are filled with ups and downs,” she said. “You’ll be tempted to see those downs as failures, but I encourage you to view them as learning opportunities.”

And with that, Nolan turned to the president and said, “President Morehead, I believe these folks are ready to graduate.”