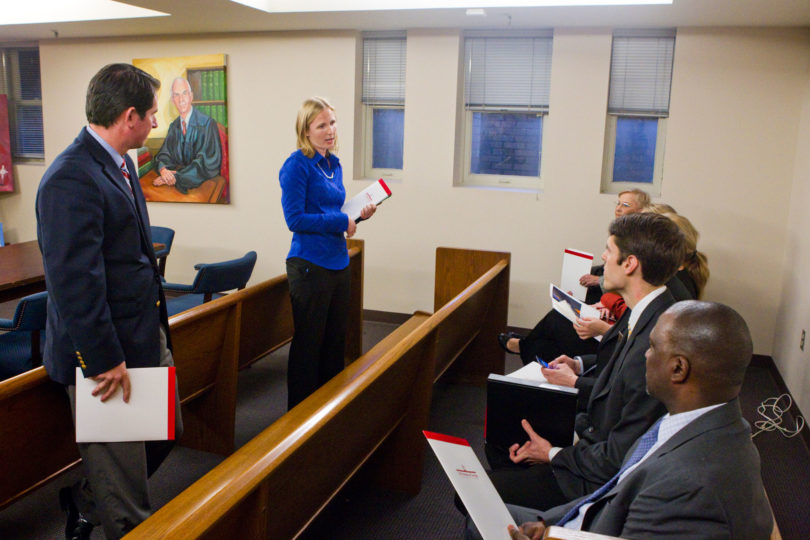 The Fanning Institute, a public service and outreach unit, trains youth volunteers to serve as judges, bailiffs, advocates and jurors for the court. The training is done in collaboration with UGA law students. In the past year, 24 students from three area high schools have completed this youth leadership development program. That evening before the hearings began, Emily Boness, a Fanning faculty member, explained Peer Court’s history to Deal and her staff. Boness’ participation in a similar court as a youth in Alaska led her to law school at UGA. In 2011, she approached Robin Shearer, judge for the Athens-Clarke County Juvenile Court, about the idea of creating a court. The judge was enthusiastic.

By March 2012, 13 students had completed training and the first hearings took place. Since then, 52 first-time offenders have chosen to have their cases decided by Athens Peer Court.

“Are these kids who have actually been arrested?” Deal asked.

Judge Shearer explained that each young person appearing before Athens Peer Court is a first-time offender who accepts the charges against them and agrees to whatever sentence is decided by the jury.

“I think it’s good to give people a second chance,” said Shimobi Ojijuru, a 14-year-old Clarke Central student who served as bailiff that evening. “It gives offenders a way to enter society in a positive way.”

Once questions were answered, the jurors, advocates and offender filed into the packed courtroom. As the bailiff asked all to rise, Shambrelle Barnes, a 17-year-old Cedar Shoals student, entered and took her place at the judge’s bench.

“Court is now in session,” Judge Barnes said. “Is the offender present?”

Three cases were heard that evening-two shoplifting and one curfew violation. In addition to apologizing to those they had harmed and completing community service, all offenders were required to serve on the jury for the next Peer Court evening.

“My favorite Peer Court moment was when a former offender came to serve as a juror,” Boness said. “At first she said, ‘I can’t believe I’m here.’ But she ended up wanting to be the jury foreperson, and I think she appreciated having input into the process.”

Peer or teen court programs are common around the country, but this is the first such program in Athens and one of only a handful in the state of Georgia. It’s the only one listed by the National Association of Youth Courts. The Governor’s Office of Children and Families-Deal chairs its advisory board-has provided financial support to establish the Peer Court.

“I’m most proud of the kids learning a new way of thinking and the vocabulary to explain their reasoning,” Boness said. “They could answer any question that Mrs. Deal and her staff asked.”

Boness said she hopes to make mediation services available through APC and take the Peer Court idea to other communities around the state.

When some people first hear about the idea, she said, they are concerned about confidentiality issues and that offenders could get off too easily. But neither has been a problem because the youth volunteers take their responsibility seriously, respecting the people and the process. Most people recognize the experience as a leadership development opportunity for the volunteers and as a way for first offenders to repair the harm caused by their crime, she said.

At a recent recruiting event for the next training class, she asked students why they might want to be part of Athens Peer Court. “If you were arrested, you’d want your peers there for you,” one student said.