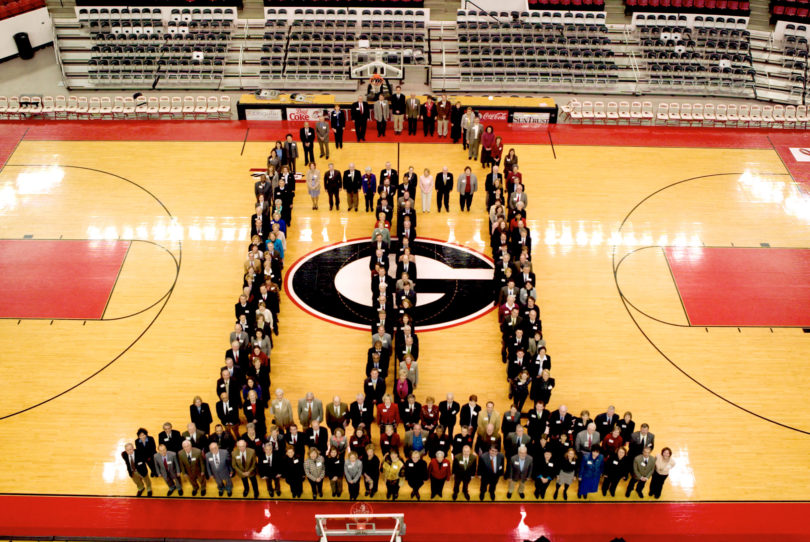 UGA publicly launched the largest fund-raising effort in school history April 14, with the announcement of the $500 million Archway to Excellence Campaign during a gala kickoff event at Atlanta’s World Congress Center.

Calling the celebration unlike any the university had seen in its 220 years, President Michael F. Adams welcomed hundreds of alumni and friends to the kickoff.

“Private financial support is what separates great universities from those that are merely good,” Adams said.

UGA announced that more than $298.2 million of the $500 million goal had already been raised during the advance phase of the campaign. Adams urged all UGA supporters to contribute.

“Your financial support of the institution we all cherish is already making a difference in the lives of UGA’s students, faculty and staff,” he said.

The university began preparing for the Archway to Excellence Campaign about five years ago when the strategic plan was developed, spelling out an ambitious agenda that focused on three themes: building the new learning environment, maximizing research opportunities and competing in a global economy.

Determining that $500 million in private funds was necessary to execute the strategic plan, UGA adopted six strategic goals for the campaign: attracting and supporting the best students, recruiting and retaining top faculty, strengthening programs to serve the state and beyond, advancing the quest for knowledge and achieving pre-eminence, enriching the campus and building the new learning environment, and ensuring annual and long-term unrestricted support.

At the kickoff event, UGA also announced three new cumulative giving societies that recognize major donors, including individuals, corporations, foundations and organizations whose cumulative gifts have reached $1 million and above.

The societies reflect all gifts and, in order to be perpetual, are not limited to the current campaign. The new giving societies are the Crystal Arch Society, $10 million; the Abraham Baldwin Society, $5 million; and the 1785 Society, $1 million.

The kickoff event was focused on students, with several student musical groups performing and senior Adam Sparks from Watkinsville serving as master of ceremonies. Junior Mallory Grebel from Leesburg, a social work major who served as vice president of the SGA, thanked the guests, saying, “On behalf of the more than 33,405 students at UGA, we want to express our appreciation for your love of the University of Georgia and the financial support that is making UGA one of the best universities in America.”

Dean Garnett Stokes of the Franklin College of Arts and Sciences, who holds master’s and doctoral degrees from UGA and has spent her entire career at her alma mater, said private gifts to UGA are “helping turn dreams into delight for the nearly 2,000 faculty members at UGA.”

Stokes said she hears frequently from other deans that the desire for learning on campus has never been stronger.

“The faculty as a whole here understands that education is both an intellectual joy and an economic engine and that the future of our state, and indeed our country, depends on how well college professors instill both knowledge and a love of learning. The real test of the Archway to Excellence Campaign is how it allows us to combine the best and brightest students with the most accomplished and intellectually nimble faculty members,” Stokes said. “That is the recipe for success, pure and simple.”

Lynda Courts of Atlanta, chair of the UGA Foundation and a graduate of UGA’s English department, said the campaign kickoff celebration had two purposes: “One is to celebrate what has already been raised in support of the campaign. The second is to focus on the portion of the $500 million goal which remains.”

Courts said all of UGA, especially the students and faculty, deserve support and commitment from private donors.

“We are the ones who will make UGA the kind of university we want it to be,” she said. “We should celebrate what we have already accomplished, but keep our eye on the larger goal as well.”