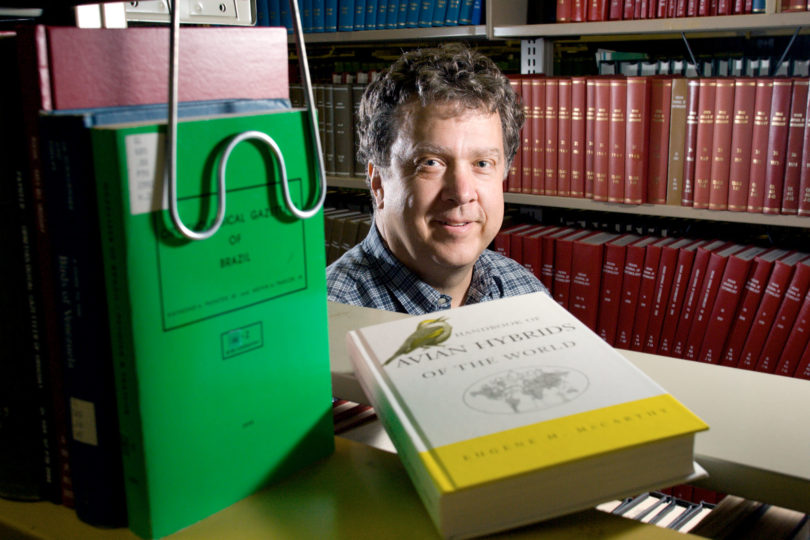 Birds do it. Bees do it. Even educated fleas do it, wrote Cole Porter.

Scientists might quarrel with the idea that animals fall in love, but when it comes to interbreeding, birds do it far more than most researchers suspected, according to a new book by a UGA scientist.

Researchers and bird enthusiasts have long known about hybrids, of course. When an experienced watcher sights a bird that doesn’t completely match any description in a field guide, he or she might conclude it is a hybrid. A hybrid is the offspring of mating between different types-in many cases types so distinct that they are treated as separate species.

But in a new book, Handbook of Avian Hybrids of the World (Oxford University Press), geneticist Eugene McCarthy shows that many old ideas about hybrids are fading as research peels back an entirely new picture of how these crosses operate in nature.

“Interest in avian hybridization has been steadily rising, especially in the fields of taxonomy, conservation and evolutionary biology,” says

McCarthy, a postdoctoral associate in the laboratory of UGA professor Jeffrey Bennetzen. “As it turns out, many avian hybrids are not sterile. The ability of such hybrids to produce offspring has important implications for how we think about natural populations and the origin of new organismal types.”

The book is an extremely detailed listing of known hybrids, with massive documentation. It runs to nearly 600 pages.

William S. Moore, a well-known ornithologist and professor of biology at Wayne State University, says the book “seems to come as close to a complete compilation as is humanly possible.”

No modern reference on the topic has been available, and yet information on avian hybridization is important for anyone who works with, or takes an interest in birds.

McCarthy points out that conservation biologists, for example, might want to know whether an introduced bird is likely to hybridize with native ones. Birders, who are nothing if not obsessive about identification, want as much information as possible on why a certain bird might not look quite like others in the same species. And a zookeeper might have concerns if she plans to place a new bird in a mixed flock.

The number of crosses, both known and suspected, is staggering. The book lists approximately 4,000 different kinds, about half of them occurring in a natural setting.

“I have a friend who seems to know every bird in North America, and I asked him how many crosses he thought there were in wood warblers,” says McCarthy. “He thought for a minute and says ‘maybe two.’ In fact, there are 70 listed in my book, almost all of them occurring in a natural setting. The realization that even people who are otherwise well informed about birds are often largely unaware that bird hybrids are common was one of the main things that got me going on this project.”

One of the most interesting aspects of McCarthy’s book is a new assessment of fertility in avian hybrids. The actual ability of hybrids to produce offspring, in fact, varies from cross to cross and, for a particular cross, from individual to individual. True, some hybrids are ­sterile, but others are relatively fertile.

Avian crossbreeds often live in “hybrid zones,” regions where many hybrids are produced on an ongoing basis. Such zones lie between the ranges of the two interbreeding types, often in transitional environments. For example, a lowland bird might hybridize with an alpine resident at intermediate elevations; however, in many cases the position of such zones doesn’t seem to be determined by any particular environmental factor. In fact, some hybrid zones change position over time.

Although hybrids are generally intermediate in appearance between their parents, they may resemble one parent in one trait while resembling the other with respect to a different trait. And while avian hybrids commonly mix the physical traits of their parents, identifications based on such traits can be dicey in some cases and further evaluation by molecular genetic techniques may be required.

While increasing knowledge of hybrids has added immensely to the picture of avian species in the past 20 years, rare hybrids are unfortunately mistaken at times for endangered species.

Why do some birds fail to mate with their own kind? Often, such interbreeding appears to be caused by a lack of appropriate mates or by aberrant mating preferences resulting from early learning. For example, a female nestling exposed to the song of a male bird of another type, may when adult choose a male of that type as a mate.

“For many years, animal hybrids were believed to occur only rarely, and even then, primarily in captivity,” says McCarthy. “But avian hybrids cannot be so easily dismissed. Hybrid zones listed in the cross accounts [in the book] occur in virtually every country of the world. In many of these zones, hybrids are produced in huge numbers. Much remains to be learned about hybridization in birds.”

Eugene McCarthy’s new book may be the volume that makes such new studies take wing.