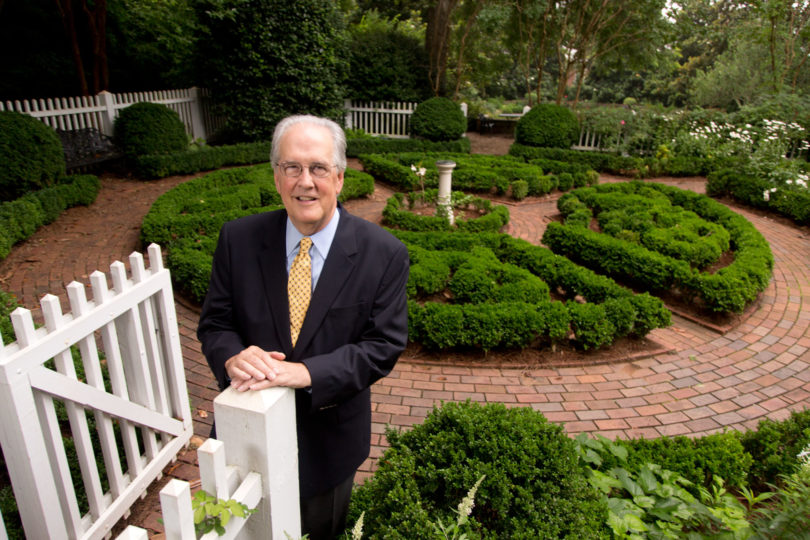 There are new faces on campus in 2013 as the College of Education, the College of Engineering, the Grady College of Journalism and Mass Communication and the School of Public and International Affairs welcome new deans. However, UGA President Jere W. Morehead turned to a familiar face when selecting an interim dean to lead theTerry College of Business as the search committee continues to look for a successor to Robert T. Sumichrast.

UGA President Emeritus Charles B. Knapp returned to Athens this summer to serve as interim dean of the Terry College.

As UGA’s president from 1987 to 1997, Knapp set the university’s agenda-successfully raising its endowment and helping build a reputation of academic excellence that put UGA on a path to becoming a “Public Ivy.”

In his new job, Knapp sees his role as less of a trailblazer and more of caretaker.

“There’s a balance with being an interim dean between taking necessary action, managing the resources of the college and not doing things that will tie the hands of a permanent dean five years down the line,” he said.

With that in mind, Knapp plans largely to focus on an initiative that is moving forward no matter who comes in as the next dean: That is the Building Terry campaign, which still is raising funds for the future Business Learning Community.

This is a function well-suited for Knapp, who already is well-known to the people in the best position to aid the campaign.

“At one level, I’m familiar to the potential fundraising base of the college,” Knapp said. “A lot of these people I knew when I was president and I still know.”

It also helps that Knapp’s ties to the Terry College run deep.

In his years as UGA president, Knapp also had a faculty appointment in economics in the Terry College.

Furthermore, Knapp said the “signal event” of his presidency was when Brooks Hall, which houses the Terry College, caught fire and was gutted.

During the rebuilding process, Knapp led an effort with then-Terry College Dean Albert W. Niemi to upgrade the building’s classrooms and office space.

“Isn’t there a nice sense of irony involved that one of my major assignments here is to raise money for the new building when we had to reconstruct Brooks Hall after it burned?” he said.

Knapp’s role as interim dean brings the president emeritus back into a very visible role at UGA-but Knapp has never really left the academic world since stepping down as dean in 1997.

He has served as president of the Aspen Institute, as a partner at the executive search firm Heidrick & Struggles and as chairman of the East Lake Foundation in Atlanta.

He also held a part-time faculty appointment for three years at Tulane University. He has had a faculty appointment at UGA in the Institute of Higher Education in the executive doctoral program since 2005. He currently is the director of that program.

Returning to a leadership role in the Terry College, Knapp has noticed changes in how things are run in terms of communication and fundraising.

“Everything is a little different with being an administrator,” Knapp said. “Some things are a lot different.”

While there has been a learning curve for becoming familiar again with how to lead an organization as large as the Terry College-as of fall 2012 there were 3,256 total students, 136 faculty members and 140 professionals on staff-there will also be some advantages.

Knapp said he is looking forward to participating in the annual economic forecast disseminated by the college.

As interim dean, Knapp will get to deliver the forecast for the state of Georgia.

“It’s fortuitous because I’m an economist,” he said. “I’m more or less depreciated,” he said jokingly, “but I’ve still got enough in me to talk economics.”

When asked why he chose to come back into a prominent role at UGA now, Knapp said it is because Morehead asked him to serve.

Knapp was on vacation with his wife, Lynne, cruising on the Rhine River in May when he received a call from Dan Amos, CEO of Aflac Inc. and member of the Terry College dean search committee, asking him to consider taking the job. Knapp accepted when he got a second call from Morehead.

“This was the University of Georgia under the auspices of a new president asking me to do it,” he said. “It wasn’t really a tough decision. I want to do and will continue to do whatever is best for this institution.”

Knapp said he has known Morehead since he arrived in 1987, when the current president was an assistant professor in the Terry College.

“One of the things I’m most pleased about is to be involved with Jere Morehead at the outset of his presidency,” he said. “I think he’s the right person at the right time for Georgia, and it’s exciting for me to be involved in that.”