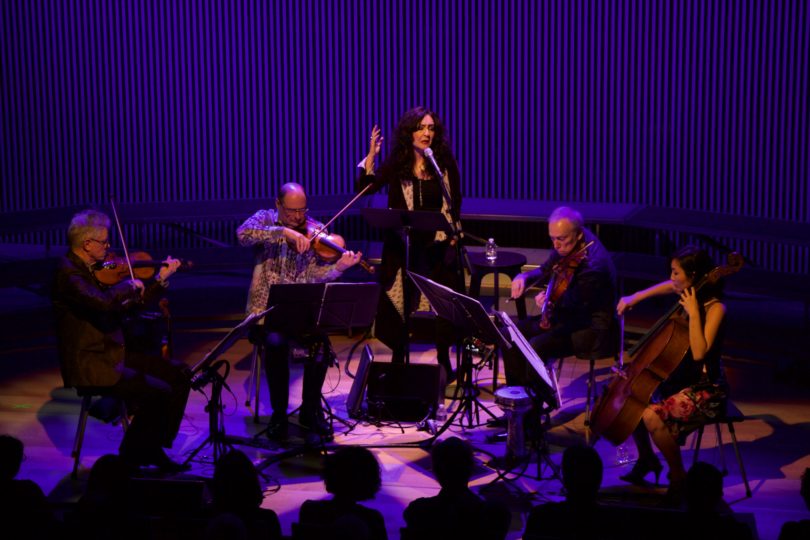 UGA Presents is bringing the award-winning Kronos Quartet to Athens Sept. 15 for a 7 p.m. performance in Hodgson Concert Hall.

The quartet will be joined by Iranian vocalist Mahsa Vahdat for a genre-blending concert featuring music from around the world inspired by artists such as John Coltrane, Mahalia Jackson and the Persian poet Rumi.

For 45 years, San Francisco’s Kronos Quartet has combined a spirit of fearless exploration with a commitment to reimagining the string quartet experience. In the process, Kronos has become one of the world’s most celebrated and influential ensembles, performing thousands of concerts worldwide, releasing more than 60 recordings and commissioning more than 1,000 works and arrangements for string quartet. Kronos has received over 40 awards, including the Polar Music and Avery Fisher Prizes, two of the most prestigious awards given to musicians, and the WOMEX  (World Music Expo) Artist Award.

Kronos’ work has been featured prominently in films, including the Academy Award–nominated documentaries “How to Survive a Plague” (2012) and “Dirty Wars” (2013). Kronos also recorded scores by Jacob Garchik (“The Green Fog”), Philip Glass (“Dracula”), Clint Mansell (“The Fountain and Requiem for a Dream”) and Terry Riley (“Hochelaga terre des âmes”). “A Thousand Thoughts: A Live Documentary with the Kronos Quartet,” written and directed by Sam Green and Joe Bini, debuted at the Sundance Film Festival in 2018.

Mahsa Vahdat is one of the most important performers of Persian vocal music in the world today. She was born in 1973 in Tehran and has performed in concerts and festivals throughout Asia, Europe, America, Oceania and Africa. Since 2007, Vahdat has been one of the ambassadors of Freemuse Organization, an independent international organization that advocates freedom of expression for musicians and composers worldwide.

Tickets for the Kronos Quartet concert start at $30 and can be purchased at the Performing Arts Center box office, online at pac.uga.edu or by calling 706-542-4400. A limited number of discounted tickets are available to current UGA students for $10 with a valid UGA ID (limit one ticket per student).