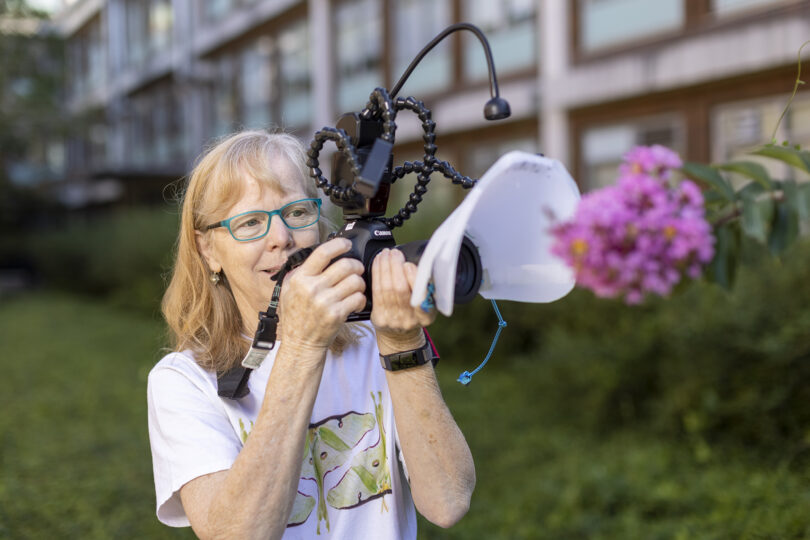 Jena Johnson studies insects as a lab manager in the College of Agricultural and Environmental Sciences' entomology department and includes them in her photography. (Photo by Peter Frey/UGA)

Jena Johnson sees the beauty in the study of insects

Most people try to swat them away, but Jena Johnson welcomes the beauty in the wings of a mosquito.

Johnson, a lab manager in the College of Agricultural and Environmental Sciences’ entomology department, fell in love with the study of insects during her junior year of college at Nicholls State University. She was majoring in plant science and had to make an insect collection for an entomology class.

“It was the clearest a-ha moment of my life,” she said. “I fell in love with the beauty and fascinating life histories of insects.”

That led to a career working with insects—and a habit of including them in her own art.

After graduation, she became an entomology technician at the University of Florida. She wanted to learn more and went on to earn her master’s degree in entomology at Clemson University. Johnson met her husband, Michael Strand, H.M Pulliam Chair and professor of entomology in the College of Agricultural and Environmental Sciences, there. Later, they both accepted positions in entomology at the University of Wisconsin-Madison. They moved to Athens for their current positions in 2001. They continue to work together, and Johnson said that they “have been a successful research team for more than 30 years.” 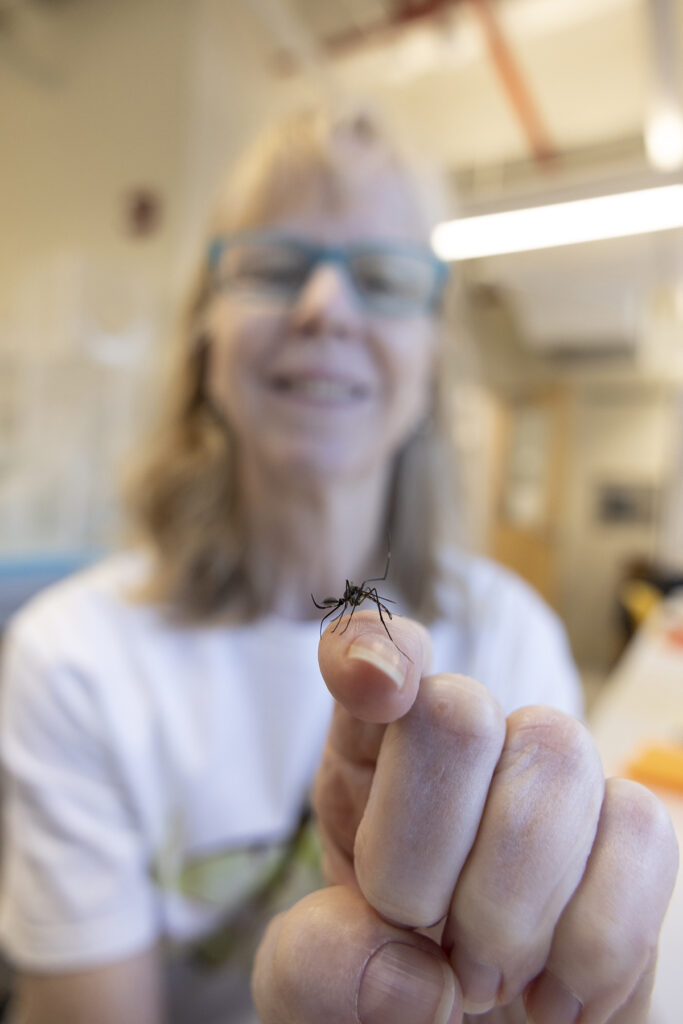 In her role, Johnson is responsible for everything from hands-on research and data collection to managing the organization and cleanliness of the laboratory. Some days might include setting up an experiment. Other days might include working with offices across campus to gather supplies or check on a grant. Regardless of what she’s doing day to day, she considers herself a facilitator for the 12-15 scientists on the team, making sure they have everything they need to succeed in their research.

“The job of lab manager in an active research lab is full of variety,” Johnson said. “Looking back over many years, it has been interesting, stimulating and varied, and I feel fortunate to do this work.”

Her favorite part of her job is overseeing live insects, particularly when she has a new insect to rear. There are two particular insects the lab studies—wasps and mosquitos. Johnson helped rear many different species of parasitic wasps and currently maintains seven different species of mosquitos, which she said can be labor-intensive and requires attention six days per week.

“There is a lot of science, but there’s a lot of art to it, too,” Johnson said.

Jena Johnson’s interest in insect photography began when she was in graduate school. (Photo by Jena Johnson)

That blend of science and art is where her skill set blooms. Part of the study of insects is looking at them under magnification, which Johnson said is when their true beauty is revealed. She wants others to see the magnificence of the moment when a mosquito emerges from its pupa at the water’s surface. According to Johnson, it is through macro photography that this beauty can be captured and shared with others.

“You want to show people bigger than life-size images so that they can see all the details and the beauty—the hairs, the colorations and the symmetry,” she said. “My ambitions lie in the interface between biology and art.”

Johnson belongs to a group of insect photographers called BugShot. She started as a participant in its macrophotography workshops, has traveled with the group, and now is on the list of instructors. She’s also been part of a two-person photography exhibition at the State Botanical Garden.

Her interest in insect photography began when she was in graduate school. A fellow student had a camera and showed her some of his photos. She was fascinated by what that 35mm camera and film produced and began taking her own photos for research. As digital cameras became affordable, she began pursuing it as a hobby.

Strand and Johnson also maintain a horticultural garden with various conifers and perennials that has been featured on local garden tours. Additionally, Johnson crafts handmade books which she embellishes with insect prints and graphics.

Whether it’s in the lab, in the garden or behind the camera, Johnson finds a way to be imaginative and inventive.

“I think I’ve made the most out of my job,” Johnson said. “I think I’ve succeeded at making a long-term career interesting and creative.”