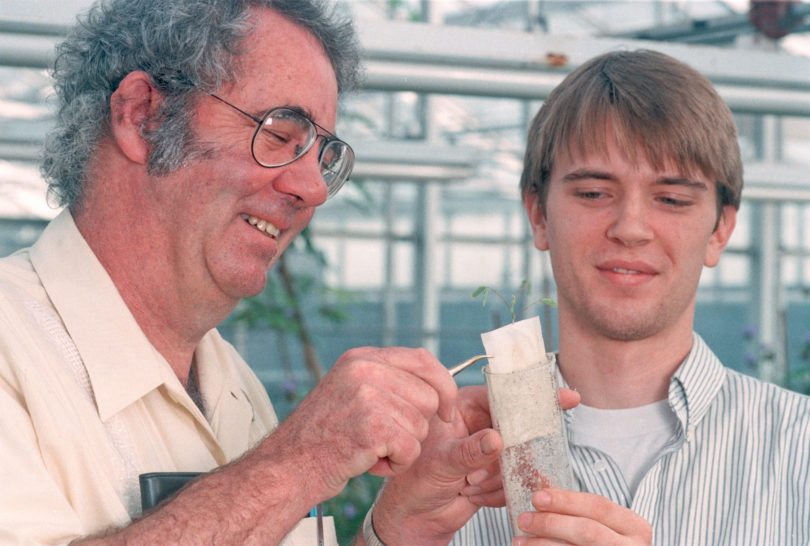 Colleagues knew UGA scientist Bruce Lee Haines as a private, low-key man whose life revolved around his research on plant ecology and who loved talking science with graduate students and fellow faculty.

Friends also knew he pinched his pennies, living alone in a house heated by a wood stove and reusing everything he could. He even drove an old pickup until he considered it no longer safe for the road.

But not many realized the extent of Haines’ frugality—or the depth of his passion for his work—until a few months after his death in February. That’s when Athens attorney William Bushnell walked into the UGA development office with a check for $1.24 million—a bequest from Haines that will create two distinguished professorships and a graduate student support fund in the university’s plant biology department, where he was a faculty member for more than 30 years.

It is the largest cash gift ever received by the department, a unit of UGA’s Franklin College of Arts and Sciences, and the professorships will be the first endowed faculty positions created within the department, according to department head Russell Malmberg.

“Bruce was not about money and he was not about formality,” said Bushnell, executor for Haines’ estate. “He loved his family and his work and he valued friendships. His gift, which he accumulated over the years, was a simple gesture from the heart to the university that supported him and allowed him to do the work he loved.”

Haines joined UGA in 1974 as a research associate in botany and was an associate professor of botany when he died. His research focused on plant ecology—how plants interact with soil minerals and nutrients, insects and other plants. He was a specialist in vegetation regeneration, patterns of mineral cycling in plants and how plants fit into their environments.

Bushnell said Haines made the bequest to honor his father and mother, who had botany degrees from UCLA, taught science in high school and junior college, and instilled an early love of science and nature in Haines and his two sisters. As a teenager, Haines accompanied his father on a research trip to Costa Rica and discovered a new species of a bromeliad plant that was named in their honor (Vriesea hainesiorum).

Malmberg said below-ground ecology, which deals with how plants interact with organisms and nutrients in the soil, is not a well-studied area, and the addition of an expert will strengthen what is already a highly regarded plant ecology faculty.

“Bruce’s death was a significant loss for our department, but through these professorships we can bring in outstanding new colleagues who will help us be even more productive and achieve even greater leadership in this field,” said Malmberg.

Lisa Donovan, a botany professor and close friend of Haines, said colleagues were aware he intended to leave a gift but were surprised by the amount, despite his reputation for thriftiness.

“Bruce was incredibly frugal and didn’t spend money on unnecessary things,” said Donovan. “He bought books and he liked to eat out and talk science with friends and graduate students. But he wouldn’t hesitate to buy a plane ticket for a student who needed to go to the tropics for research.”

Haines, who held a doctorate in botany from Duke University, conducted research on tropical plants, which took him to rain forests in Venezuela, Costa Rica and Puerto Rico and to African jungles.

Some of his research, such as how plants cycle water and nutrients and the role of plants in ecosystems, could be relevant to global ecological problems such as climate change, said Donovan.

“But Bruce had no interest in being famous,” she added. “All he cared about was that his research move forward. He lived for ­science.”