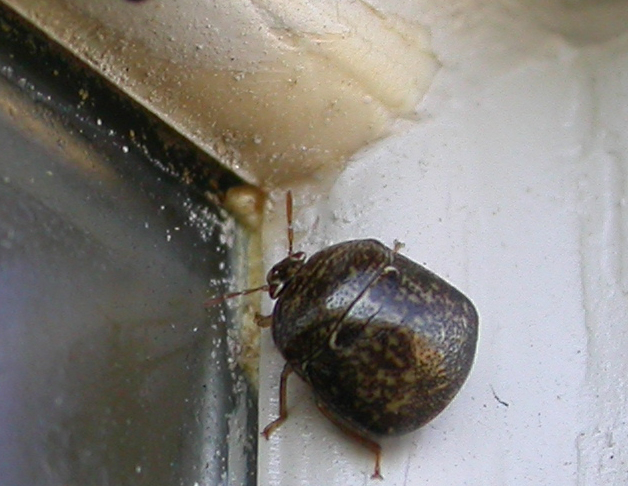 Griffin, Ga. – Two years ago, the kudzu bug arrived in Georgia. It has been aggravating homeowners and feeding on kudzu and soybeans ever since. Now, some of Georgia’s Latin American trading partners are worried that the legume-eating pest may be headed south.

In February, Honduran officials discovered dead kudzu bugs in a shipping container from Georgia. This led the country to step up inspections of cargo from Georgia, South Carolina, North Carolina, Tennessee and Alabama.

To help Latin American officials prepare for the possible introduction of the pest into their countries, University of Georgia researchers scheduled an informational meeting to share what they have learned about the kudzu bug (Megacopta cribraria) since it was found in the Southeast.

The goal was to educate the officials, representing various aspects of plant and animal health and international trade, on UGA’s current knowledge of the insect and provide a forum of discussion on trade issues surrounding quarantine concerns of the Honduran government, said Wayne Gardner, an entomologist with the UGA College of Agricultural and Environmental Sciences and the meeting’s organizer.

“The meeting was prompted by concerns voiced by the Honduran government concerning the interception of two separate container shipments of poultry products from Georgia that reportedly contained dead kudzu bug adults,” Gardner said. “The second discovery prompted Honduran officials to halt receipt of all container imports from the states of Alabama, Georgia, South Carolina, North Carolina and Tennessee.”

More than 4,000 containers from these states were reportedly held at Honduran ports, he said.

Gardner said the country’s cotton industry was hit hard by the trade sanction. Strict guidelines that require containers be cleaned before being loaded with cotton products have already helped mitigate problems of transporting the kudzu bug, Gardner said.

During their visit to Georgia March 27-29, the 16 Latin American officials toured CanAm Yarns LLC in Cedartown to see how cotton is processed and packaged before it is exported to their countries. With the help of Spanish translators, they spent two days on the UGA campus in Griffin listening to scientific presentations on the kudzu bug and asking questions.

“We focused on having speakers deliver the most up-to-date information that we have on the insect, to be totally transparent and forthcoming in those discussions, yet emphasize that this insect is not unique to the southeastern U.S.,” Gardner said. “It also hitchhikes from its native Asian range.”

“I want as much information as I can get so we will be ready to control the pest should it enter our country,” he said. “UGA has laid a lot of the groundwork for us.”

The kudzu bug feeds on legume or bean plants. In counties like Honduras, any kind of bean-eating pest has the potential to affect a major food source.

“Our initial concern is over beans because they are a main staple and a source for protein here,” said Guillermo Alvarado, executive director of the International Regional Organization of Plant and Animal Health. “Hundreds of thousands of acres of beans are grown by small farmers, and this pest would create an additional burden to these farmers and become a food security risk for us.”

“At the conclusion of the meeting, Honduran and OIRSA inspection and quarantine officials admitted there had been no problems with cotton product imports and acknowledged that the standard protocols used by the cotton industry are adequate in minimizing the risk of introducing the insect to their region,” Gardner said. “They asked that similar protocols be implemented with the poultry industry and others.”

In addition to hitching rides in cargo shipments, OIRSA officials fear kudzu bugs may leave the U.S. on commercial passenger jets, he said.

“Kudzu bugs have been intercepted in the passenger area and baggage compartments of several flights originating from Atlanta with arrivals in Guatemala and Honduras,” Gardener said. Honduran officials “have asked for some sort of protocol to address this problem. USDA Animal and Plant Health Inspection Service is working with airport authorities to develop some sort of protocols to address these risks.”