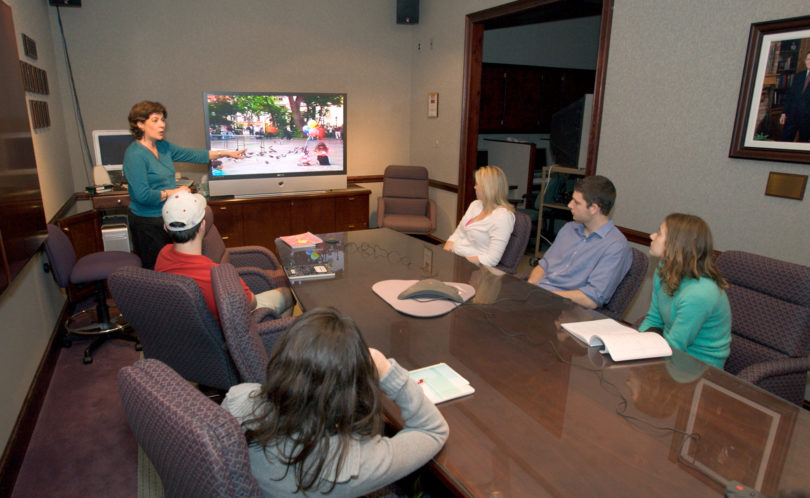 Carolina Acosta-Alzuru, associate professor of advertising and public relations, stood in front of a television set playing a video of snippets from several telenovelas, narrating for her small class of Honors students.

“The final episode is a traditional ending,” she says, “a wedding. And of course it is a Catholic wedding; this is Latin America!

“‘Love never dies,'” she continues, quoting a character’s rather overdramatic pronouncement. “You can’t get much more telenovela than that!”

Acosta-Alzuru continues in this manner, exuberantly detailing the cultural nuances that inform some scenes that might otherwise be a bit confusing. She speaks with gusto, laughing often, and her students are transfixed by both the spectacle on the TV and their professor’s obvious enthusiasm for the art form.

For telenovela truly is an art form, much revered in its native Latin America. Not only that, it is among Acosta-Alzuru’s chief scholarly pursuits, as evidenced by the Honors class she taught this spring: “Latin American telenovelas: More than melodramatic love stories.”

The class, made up of seven bilingual students, was taught almost exclusively in Spanish. Students watched telenovelas both in and out of class, kept journals reviewing the episodes and even had teleconferences with famous telenovela actors and writers.

What are telenovelas? One could describe them as Latin American soap operas to get the rough idea across to the uninitiated, but their cultural scope, complex plots and fan devotion-“We eat, drink and watch telenovelas,” Acosta-Alzuru says-make them something more.

Telenovelas have been made since the mid-1950s; before that, there were radionovelas. When Fidel Castro came to power in the late 1950s, Cuban writers fled to Mexico and Venezuela and started writing for telenovelas there.

These days, the most popular telenovelas come from Mexico, then Brazil, Venezuela and Telemundo, the company from Miami that is “becoming a force to be reckoned with,” says Acosta-Alzuru.

There are a few obvious differences between telenovelas and soap operas. One is that in Latin America, there is generally a fixed number of episodes to a series, usually around 120-150, unlike soaps that last for decades in the U.S. Here, soap operas act as a breeding ground for respected film actors; telenovela actors themselves are the most esteemed among celebrities.

The plot lines of telenovelas usually follow a formula, says Acosta-Alzuru: “They’re more over the top, in a sense. Basically, you have a heterosexual love story that only has two pieces of good news: in the beginning, when they meet, and in the end, when they get together. In the middle, it’s just bad news.” Series often involve several configurations of love triangles.

Telenovela story lines are familiar to viewers in the sense that they are often reinterpreted versions of classics like Romeo and Juliet or Cinderella. But the stories often focus on issues such as teenage pregnancy or domestic violence, making telenovelas a vehicle for social work due to their widespread popularity.

American audiences will get a new understanding of telenovelas-this summer, major U.S. networks will produce telenovelas in English, but Acosta-Alzuru isn’t sure what to expect.

As for her class, they became intimately acquainted with a Venezuelan telenovela, Cosita Rica, or “Sweet Thing”-“something a man would say to a woman in the street,” Acosta-Alzuru says. While the show featured the typical love stories, there was also an element of political critique as well-a character in the show was meant to represent Venezuelan president Hugo Chavez.

When they weren’t watching episodes, her students learned about the history of telenovelas, how they present gender and identity issues, how they are made and why people watch.

Acosta-Alzuru was able to arrange the telephone conversations with the actors through contacts she made while researching telenovelas in her native Venezuela in 2000 and 2003.

She recently received a grant from the Willson Center for Humanities and Arts to write a book soon to be published in Latin America called Our Story: Telenovela Crisis and Reality. The book will later be translated in English.