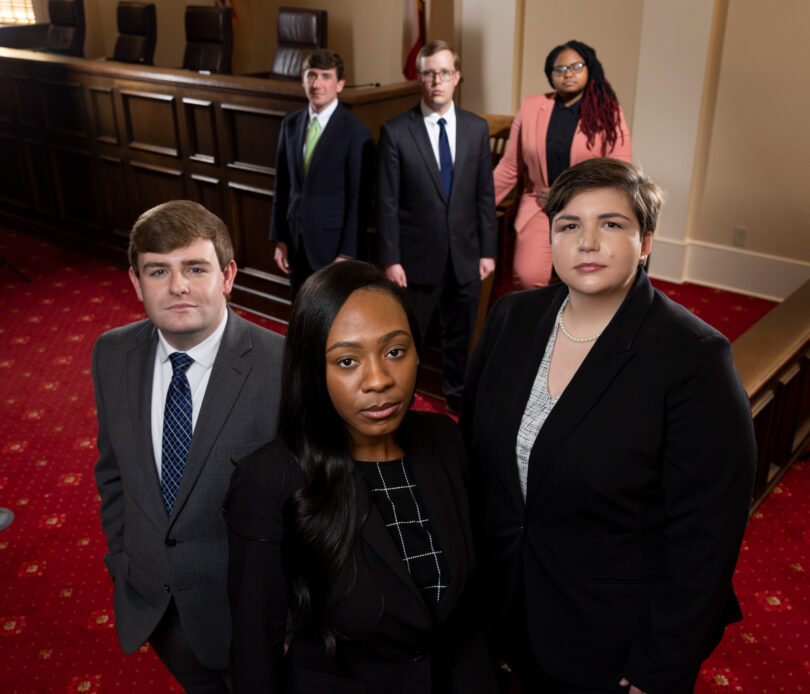 The School of Law sent two teams of second-year students to April’s Intrastate Moot Court Competition. The trio of Nick Lewis, Kiyah Bussie, and Claire Kimbrell (foreground, from left to right) won the championship. The team of Alex Balser, Christian Sullivan, and Destiny Barnett (background, from left to right) made it to the semifinals. (Photo by Andrew Davis Tucker/UGA)

In the moot court system, the University of Georgia is represented by two separate but equally important groups of second- and third-year law students. This is their story. DUN DUN!

Not every Georgia Bulldog wears red and black when they step on the court.

Or into the court, as it were.

Sometimes, it’s a dark jacket and dress shoes. But those buttoned-up threads don’t make these Bulldogs any less competitive. That’s the uniform of the students who compete in the School of Law’s Moot Court program.

“This is as close as a law student can get to playing sports. Everything you do in high school sports, you do in moot court,” says third-year law student Haley Kairab. She and her teammates, Navroz Tharani and Taylor Lear AB ’16, ABJ ’16, made the Final Four at the most recent National Moot Court Competition, which brought together teams from some 120 law schools around the country. 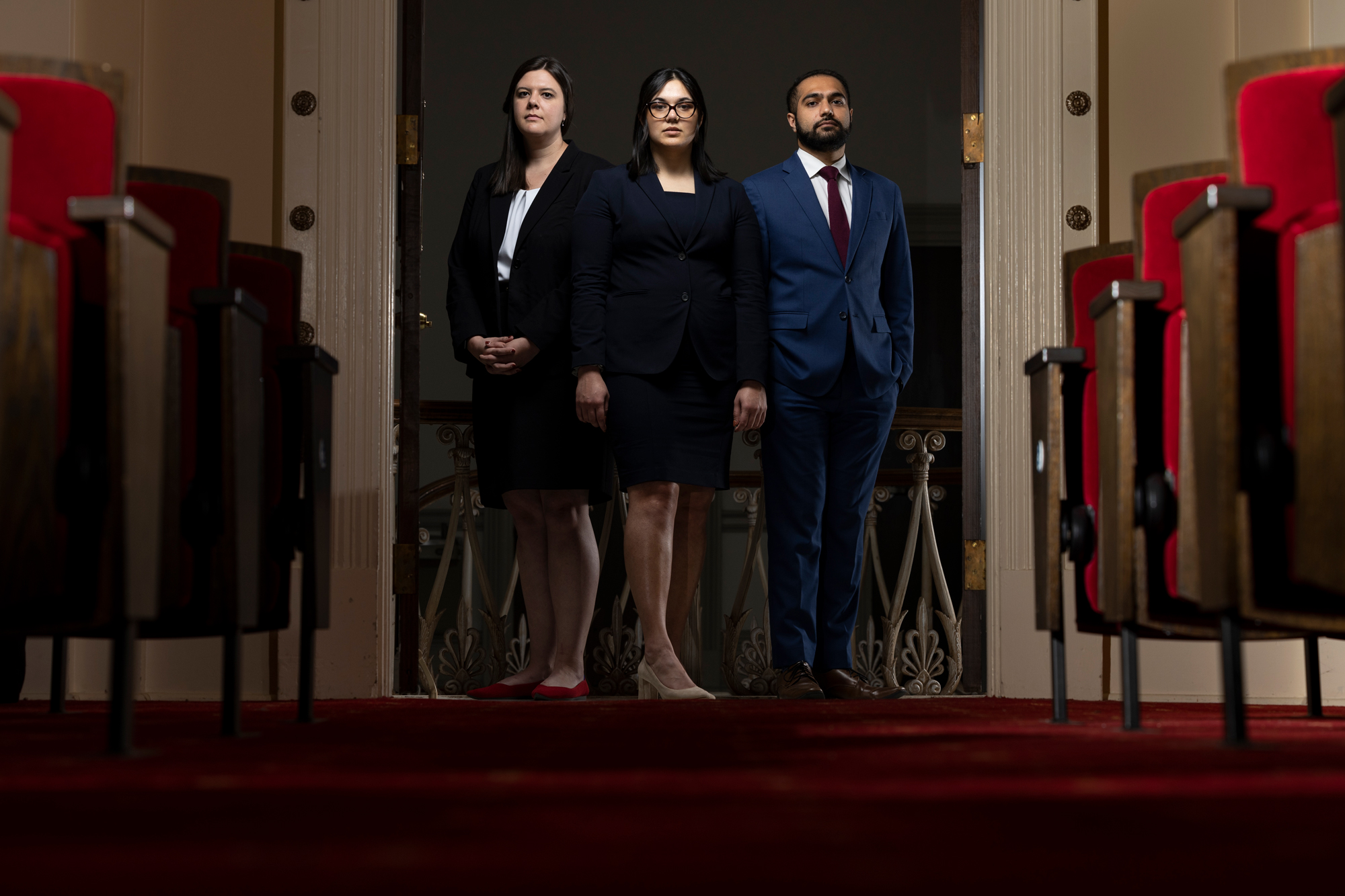 At the University of Georgia School of Law, moot court is serious business. And business is going very well. Third-year law students (from left to right) Taylor Lear, Haley Kairab, and Navroz Tharani, made the Final Four at the most recent National Moot Court Competition, which brought together teams from some 120 law schools from around the country. (Photo by Andrew Davis Tucker/UGA)

“You get yelled at by your coaches. You face teams that have practiced differently than you have,” she continues. “You feel adrenaline, and you feel exhaustion.”

The Verdict is In

Moot Court competitions simulate an appellate court proceeding where student competitors aim to sway the verdict of judges as if they were arguing before them in the Supreme Court. Mock Trial, which is also part of UGA’s Advocacy Program, is a simulated jury trial with a prosecution and a defense.

“It’s a good problem to have, but it’s very difficult to pare it down to 24 when 100 students try out,” says Kellie Casey AB ’87, JD ’90, UGA’s director of advocacy and coach of the Moot Court and Mock Trial teams since 2000. As a law student, Casey competed in Moot Court during her second and third years, winning several oralist titles along the way.

“What makes my job easier here is that the students at UGA are so bright and hardworking. We have faculty who care, and many of the second-year students stay to coach in their third year. There is a lot of institutional knowledge that rolls over.”

Preparing for a moot court competition typically lasts six weeks. After all competing teams receive their cases, each team has a few weeks to write briefs arguing each side of the case. Those can count as much as 40% of the final score.

Next, teams prepare oral arguments, again exploring both sides of the case before finally delivering their closing arguments to the judges. Competitors are scored on their ability to answer questions and persuade, as well as their knowledge of the case and the law.

“I wanted to sharpen my public speaking skills,” say Kiyah Bussie, a member of the state championship team.  “I wanted to get that confidence about standing up in front of a group.” 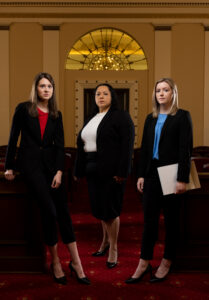 The School of Law’s advocacy program, of which Moot Court is a central part, dates back 90 years. Early on, most moot court competitions pitted UGA law students against each other. The idea of intercollegiate competitions took hold in the 1950s.

Since the 1960s, UGA Moot Court teams have won a world championship, 30 national titles, and nearly 90 regional ones. The trophies claimed by Bulldog Moot Court competitors in just the last 20 years don’t even fit in the two trophy cases at the back of the Hatton Lovejoy Courtroom in Hirsch Hall. A table next to the judge’s bench is covered with them, and a few more spill into the room next door.

UGA’s most recent national championship—from this past January—spoke not only to the students’ skills but also the pandemic world in which they have been competing. Second-year law students Molly Laughlin, Rachel Byers AB ’20, and Lindsey Adams AB ’20 won UGA’s second consecutive title in the National Online Moot Court Competition.

A great deal of the trio’s law school experience has been virtual, so online competition didn’t represent a huge jump, but there were still skills to be learned.

“We had to teach ourselves to look at the judges and not our notes,” Byers says, noting that reading directly from pages—something many online competitors do—is an easy way to lose points. “Usually, you can read the judges’ reactions, too, but online you really don’t have that ability.”

As competitions leave Zoom and return in person, the students are adjusting.

“I try to be the most prepared person in the room,” Laughlin says. In addition to competing with the team that won the National Online Moot Court competition, she competes with the School of Law’s Mock Trial teams.

“Whatever happens, it’s fine,” she continues. “You can respond to things in the moment. That’s what the judges see, and that’s how UGA wins.”

For many School of Law grads, the moot court experience was foundational to their career as attorneys. And they continue to be involved. They serve as mentors or even judges. In some cases, they give back to the university directly in honor of the faculty who inspired them. 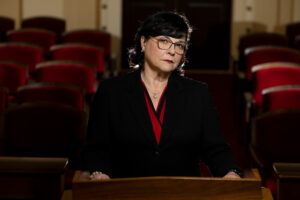 “What makes my job easier here is that the students at UGA are so bright and hardworking,” says Kellie Casey, director of advocacy and coach of the moot court and mock trial teams. “We have faculty who care, and many of the second-year students stay to coach in their third year. There is a lot of institutional knowledge that rolls over.” (Photo by Andrew Davis Tucker/UGA)

For example, in 2019, three of Casey’s former advocacy students, Kevin Epps JD ’08, Jeffrey DeLoach JD ’03, and Adam Hoipkemier JD ’08, created the Kellie R. Casey Scholarship Fund through their Athens law firm. The fund supports one annual scholarship for a law student with an interest in advocacy.

“I’ve never been so shocked in my life,” Casey says. “It really is the greatest honor.”

After mentoring hundreds of law students and winning multiple national championships, her former students were delighted to recognize her.

The program is also a source of pride for the School of Law at large.

“Advocacy at the University of Georgia enjoys a great tradition of excellence thanks to the dedicated students and great directors like Kellie Casey and, at one time, President Jere Morehead,” says Dean Peter “Bo” Rutledge. From 1986 to 1995, Morehead JD ’80 served as the program’s advisor and annually judges the finals of the first-year competition, when the Morehead Best Oralist Award is presented to the winner.

“Against that tradition, the School of Law is proud to celebrate those students and the incredible successes that they posted this year,” Rutledge continues. “Great advocacy training helps to produce great lawyers,
and it helps to fuel our vision to be the nation’s best return on investment in
legal education.”

This story will appear in the Summer 2022 issue of Georgia Magazine.