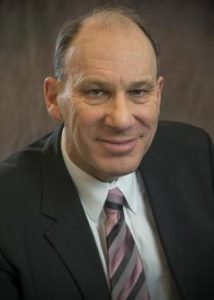 David Strauss presented the 117th John A. Sibley Lecture on April 12 as part of the 2018-2019 Signature Lecture series.

In his research, David Strauss ponders a seemingly simple question: Are Supreme Court decisions the law of the land?

At first glance, the answer seems obvious. Of course, the Supreme Court is the final verdict on legal questions. Why even ask?

But then one might remember the U.S. Constitution actually is the legal framework of the country. The Supreme Court’s job is to make sure that law is properly adhered to.

Or is it a combination of both? Everyone knows the Constitution is what the Supreme Court says it is.

The question, Strauss argues, is much more complex than it appears.

A legal scholar and current Distinguished Professor of Law at the University of Chicago Law School, Strauss has argued 19 cases before the Supreme Court. He believes the questions above are framed incorrectly, focusing on what a given law is supposed to mean rather than what that law requires citizens and elected officials alike to do.

The waters become muddied, though, when executives, like the president, disagree with the Supreme Court’s rulings.

One such example was President Abraham Lincoln’s response to Dred Scott v. Sandford, which held that African Americans were not citizens and therefore did not have the same rights as citizens. In defiance of that finding, Lincoln allowed the State Department to issue passports to black Americans. As passports were only given to citizens, the loophole gave the former slaves a claim to citizenship.

Lincoln acted in good faith, as Strauss would describe it. But other presidents have overstepped the constraints of their office to push political agendas, such as Andrew Jackson’s actions after the Supreme Court found Georgia to be violating a treaty that guaranteed Cherokee Indians land when the state tried to seize the land after finding gold there.

Jackson used military force to evict the Cherokees from their lawfully guaranteed land. Such executive overreach is concerning and not limited to past administrations.

“I think that’s a real risk,” Strauss said. “I’m not sure elevating judicial supremacy is the answer to that.”

Recent administrations, however, have mostly abided by Supreme Court decisions.

As justices have begun retiring, sitting presidents started stacking the courts with judges the presidents found sympathetic to their own political stances, something that allows that political party to continue to exert influence over U.S. policy even after the president in question has finished his term. Strauss believes this will eventually lead to more confrontations between legislators and the Supreme Court.