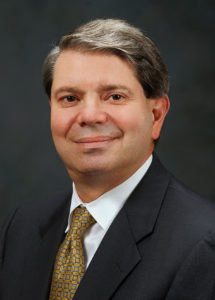 Standing before a painting that survived two fires and more than 150 years of Southern heat and exposure, Gene Dodaro, comptroller general for the U.S. Government Accountability Office, urged the next generation of public servants to look beyond the flames they may see in their government today.

Dodaro was on campus March 25 to give the School of Public and International Affairs’ 2019 Getzen Lecture on Public Accountability. Designated one of the university’s Signature Lectures, Dodaro’s talk, “The Many Dimensions of Accountability: GAO’s Mission for Congress and the Nation,” was co-sponsored by SPIA’s public administration and policy department.

Despite spending nearly half a century working to reel in a government that occasionally spirals unchecked, Dodaro spoke with excitement of what might come with a few decades of proactive public service.

Dodaro said he chose to work in the public sector to be part of “the solution.”

“I entered into government because I didn’t want to be somebody who was just sitting and complaining about it,” he said. “I wanted to get in the game and see if I could make improvements.”

Dodaro started at the GAO immediately after college and quickly rose through the ranks, becoming second in command in 1999. Nine years later, he was confirmed as comptroller general.

“GAO exists to support the Congress in carrying out its constitutional responsibilities and to enhance the performance and accountability of government for the benefit of the American people,” said Dodaro, whose career has included many highlights, most notably pushing forward regulations in a period of rapid scientific and technological advancement, urging Congress and the American people to confront the national debt crisis and overseeing regulatory changes in the wake of the Great Recession.

As Dodaro imbued the lessons of his career to future public servants and researchers, he boiled his time at the GAO down to five components: managing risk, facilitating the political balance, analyzing and promoting fiscal health, preparing for the future and promoting accountability.

During his lecture, Dodaro also articulated the pressing importance of public servants with technological expertise.

“We need to protect the integrity of our weapon systems and other projects that deal with emerging technologies,” he said. “Cybersecurity will only get more complicated, not less: artificial intelligence, quantum computing and a lot of other areas.”