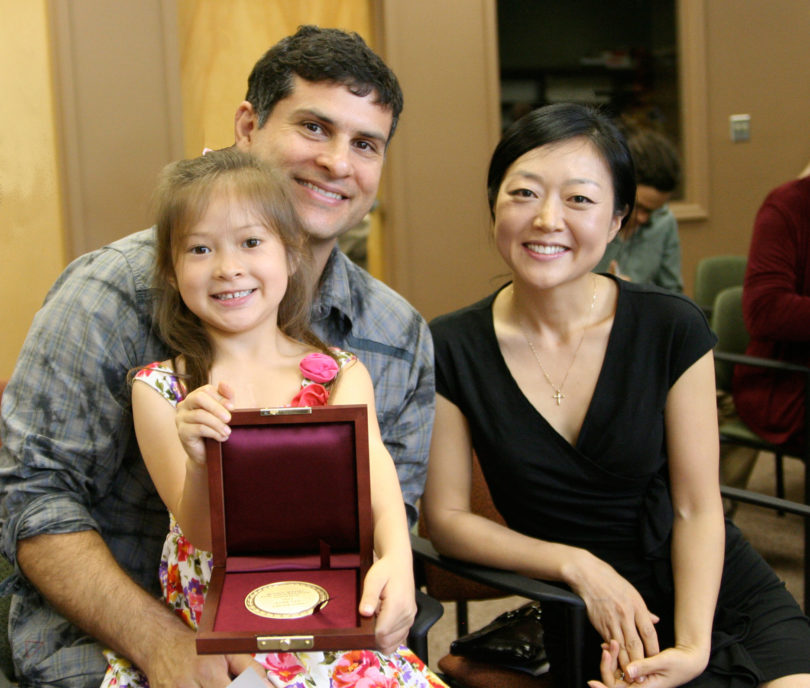 Euna Lee pictured with her husband

Athens, Ga. – Euna Lee and Laura Ling, two reporters taken captive by North Korea during a reporting trip, were recently honored with the McGill Medal for Journalistic Courage by the University of Georgia Grady College for Journalism and Mass Communication.

Working as reporters for former Vice President Al Gore’s Current TV media venture, they went to China to investigate a chilling situation: the plight of women who cross the border from North Korea into China to escape starvation, only to fall prey to human traffickers.

The two were detained by North Korean border guards on March 17, 2009, then sentenced by a North Korean court to 12 years hard labor for “hostile acts.” Almost five months later, former president Bill Clinton flew to Korea and was able to broker their freedom on August 5, 2009.

Korean-American videographer Lee traveled to UGA to accept her medal while Chinese-American journalist Ling, on assignment with E! Investigates, accepted via video message.

Both noted how they were humbled to be selected for the award named after Ralph McGill, courageous former editor of The Atlanta Constitution who wrote editorials challenging racial segregation in the 1950s and 1960s.

In her video, Ling, 34, said, “Ralph McGill knew that reporting on certain controversial issues entailed risks, but he also knew that leaving such issues ignored would be more detrimental to us as a society.” Noting that she does not consider herself brave, she said that the North Korean women she was covering are the courageous ones. “They are my heroes and I’d like to dedicate this award to them,” she said.

Lee also recognized McGill’s impact. “Journalists like McGill set the stage for truth and justice. Justice is in our veins,” said the 38-year-old. “After talking to some of the women, I knew I had to inform people around the world about their story. Our hope was to make a difference for North Korean women.”

Ling and Lee were nominated for the McGill Medal by reporters, editors and academicians from across the U.S. Nominees were to be “working U.S. journalists whose career has exemplified journalistic courage.”

“These women showed extreme courage and tenacity,” wrote Florida A&M University journalism professor Valerie D. White in one nomination. “They were the epitome of grace and courage and an inspiration for journalists around the world,” wrote Cleveland Plain Dealer reporter Janet H. Cho in another.

The selection was made by the 2010 class of McGill Fellows, 12 Grady College undergraduate and graduate students chosen for academic achievement, practical experience and leadership.

Senior broadcast news major Omar Lewis, the McGill Fellow who researched the nomination, presented the medal during the ceremony. He noted, “As soon as they were in custody, the women’s first priority was protecting their sources. They ate notes and destroyed videotape as soon as they were able. During daily interrogations, they revealed no names.”

Today, Ling is the host and reporter on E! Investigates, a documentary series on the E! Network, which explores topics such as teen suicide and the challenges faced by military spouses. Besides her work for Current TV’s “Vanguard” series that took her to China for the human trafficking story, Ling has worked as a series producer for Channel One News where she produced reports from around the globe. Ling co-created “Breaking it Down,” a documentary series on MTV that aired between 1999 and 2001.Her work also has appeared on ABC’s Nightline, NBC, PBS, and the WB.

Lee was born and raised in South Korea, and moved to the U.S. in order to attend film school. She joined Current TV in San Francisco in 2005, and later moved to Los Angeles with her husband, actor/writer Michael Saldate, and daughter, Hana. The reporting trip to China was Lee’s first overseas assignment. She plans to enter graduate school this summer at Columbia University to study journalism.

Both Ling and Lee have written books about their ordeal. Ling co-authored Somewhere Inside: One Sister’s Captivity in North Korea and the Other’s Fight to Bring Her Home with sister, Lisa. Lee’s book about the North Korea imprisonment,The World is Bigger Now, was published late last year.

The McGill Medal was first awarded in 2009. Funded by the McGill Lecture Endowment, contributors also include Gannett Foundation.

For 31 years, the McGill Lecture has brought significant figures in journalism to UGA to help the university honor McGill’s courage as an editor. In 2007, UGA added the McGill Symposium, bringing together students, faculty and leading journalists to consider what journalistic courage means and how it is exemplified by reporters and editors.

Established in 1915, the Grady College of Journalism and Mass Communication offers undergraduate majors in advertising, digital and broadcast journalism, magazines, newspapers, public relations, publication management and mass media arts. The college offers two graduate degrees, and is home to the Knight Chair in Health and Medical Journalism and the Peabody Awards, internationally recognized as one of the most prestigious prizes for excellence in electronic media. For more information, see www.grady.uga.edu or follow @UGAGrady on Twitter.