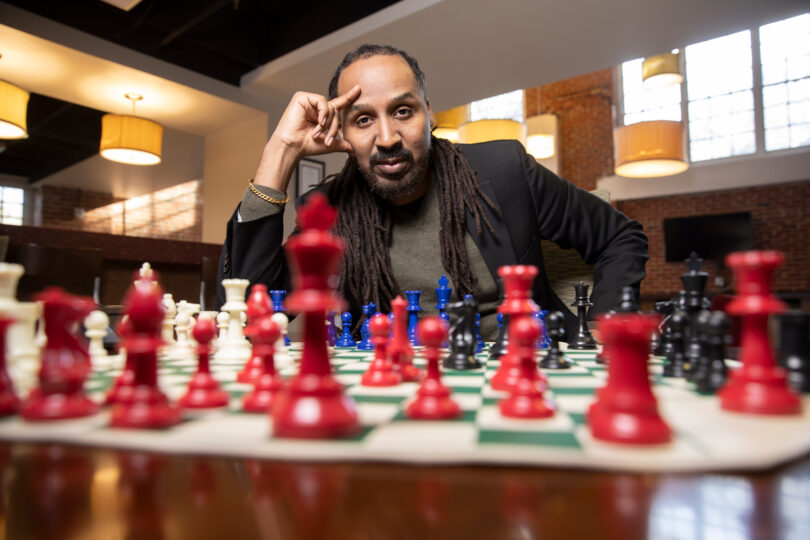 Lemuel "Life" LaRoche BSW '02, MSW '03 uses the game of chess to serve local youth through his nonprofit Chess and Community.

Lemuel “Life” LaRoche learned how to play chess from the men he calls “the elders.”

They spent their days in New York City’s parks challenging passersby to games. Not even curious kids were immune to the intrigue. LaRoche won a few—lost a lot more—but the memories and the lessons he took away from those games guide him to this day.

Most importantly, he is dedicated to passing on those lessons to the next generation of kids.

That’s the goal of Chess and Community, the nonprofit he founded in 2012. Chess and Community grew from outreach projects he began while an undergraduate then a graduate student in the School of Social Work. Few activities are more symbolic of life’s journey than chess, and LaRoche leans into that symbolism hard.

“First you understand how the pieces on the board move, then you move those pieces off the board and put your life on it,” says LaRoche BSW ‘02, MSW ‘03. His nickname comes from his work as a poet and spoken word artist.

“Where are your castles? Your community,” he continues. “Where are your bishops? Your churches and spiritual foundation. Where are the knights? The police and that community security. And the pawns, your friends. The chessboard gives you a different worldview.”

LaRoche is quick to add that chess is merely an entry point for the youth he serves. The focus is on “community.” About 45 kids (mostly African American boys) take part in programming and volunteer activities, but through its workshops and other offerings, Chess and Community engages nearly 300 kids in Athens each year. Those who graduate from the program stay involved, too, by leading book clubs or running after-school programs. LaRoche has also awarded college scholarships of up to $1,000 to 38 Chess and Community graduates.

The pandemic hit Chess and Community hard in 2020. In-person events and fundraisers were canceled in the early days, but socially distant activity has slowly returned. Chess and Community’s move online did attract some new players, though, including participants from as far away as New Jersey.

Social distancing has reframed the importance of family interactions. Parents are always encouraged to take part with the children. “We impact communities by impacting families,” LaRoche says.