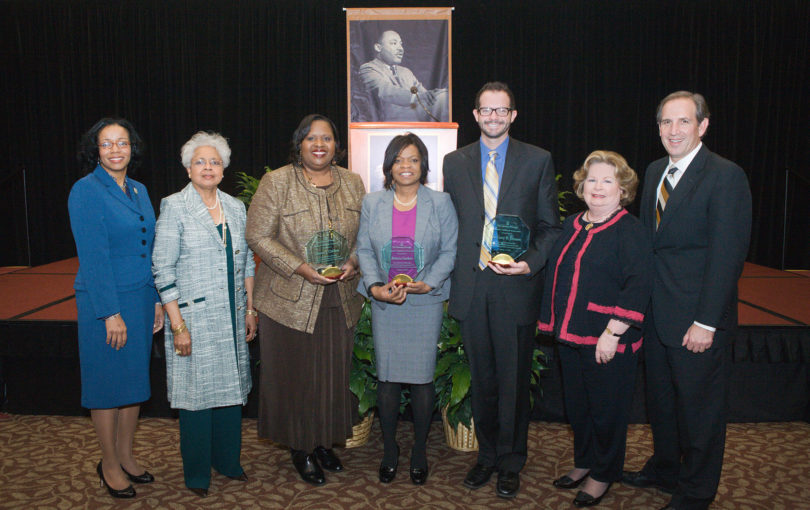 For Billye Aaron, an advocate for higher education for African Americans and the wife of baseball legend Hank Aaron, this year’s Freedom Breakfast was about remembering the life and legacy of the late Rev. Martin Luther King Jr.

Aaron spoke about the first time she met the King family at their house in Birmingham in 1959. She went on to recount a dreary evening in
April 1968 when she learned of his shooting and was among the first to arrive at the King home after the news broke. She spoke about helping King’s wife, Coretta Scott King, pack for her trip to Memphis and standing with King’s teary-eyed family and friends receiving the news from Atlanta’s mayor that King was, in fact, dead.

“The pain was just enormous, so much so that it was hard to breathe,” Aaron said to a sold-out crowd of almost 600 at the Tate Student Center on Jan. 13.

“Although he is gone, his dream is very much alive,” Aaron said. “His work goes on, his cause endures. The dream shall never die.”

She called King “the quintessential prophet of the 20th century;” and said that his words and deeds “continue to inspire, to uplift and to motivate people all over the world.

“[King] gave us strength when we were too weak to carry on,” she said. “He gave us hope when hope was gone, and he taught us to love in the midst of hate.”

She said the event “gives us pause to reflect on those individuals, who at great cost to themselves, made possible many of the things we now enjoy and take for granted.”

Themed “The Power of the Dream: Moving Forward with a Shared Vision,” the breakfast celebrated not only King’s legacy, but also those who have made a difference in the Athens community. After Aaron’s speech, the 2012 President’s Fulfilling the Dream Awards were presented to Attawa Childres, Roberta Gardner and Corey Johnson.

Childres retired from the Office of Vice President for Research in 2011 after 30 years of service.  For almost 30 years, she’s worked with the Athens Area Teen Pageant, a mentoring program that gets young African-American women involved in community service projects.

Gardner is a doctoral student and graduate teaching assistant in the department of language and literacy education. She has worked with The Prodigy Project in Atlanta to counter negative stereotypes, improve literacy, enhance achievement and employment, and reduce the black male presence in the penal system.

Johnson is an associate professor and graduate coordinator in counseling and human development services. He was recognized for his efforts to create safer environments for lesbian, gay, bisexual and transgender youth in institutional settings.