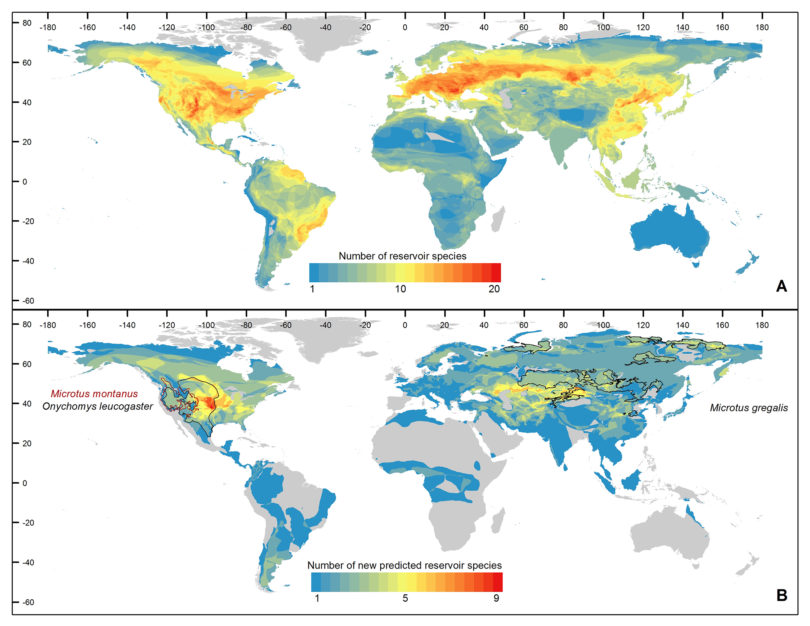 A map shows the global hot spots of rodent reservoir diversity (A) and 150 novel reservoir species predicted by the models to be in the 90th percentile probability of harboring one or more undiscovered zoonoses (B). In both panels A and B

Athens, Ga. – Researchers at the University of Georgia Odum School of Ecology have developed a way to predict which species of rodents are likeliest to be sources of new disease outbreaks in humans. Their study, which includes maps showing potential future disease hot spots, appears in the Proceedings of the National Academy of Sciences.

Pathogens that jump from animals to humans account for most new infectious disease outbreaks worldwide. With the frequency of such events increasing, being able to predict where the next new disease will emerge is becoming more important.

“This work brings us a step closer to a proactive strategy for mitigating infectious disease risk and preventing outbreaks,” said the study’s leader, Barbara Han, a disease ecologist at the Cary Institute of Ecosystem Studies who was a postdoctoral research fellow in the Odum School when the research was done. “It equips us with a watch list of high-risk species whose intrinsic traits permit them to be effective at carrying infections transmissible to humans.

“A list of predictions generated from species’ intrinsic traits may be increasingly important given accelerating rates of environmental change.”

Han and her colleagues focused their attention on rodents, a group of animals known to host a disproportionately large number of pathogens that can infect humans.

Using machine learning methods, they analyzed information about the biological and ecological traits of more than 2,000 rodent species and the pathogens they’re known to carry. Machine learning, a form of artificial intelligence, is a way to sift through enormous amounts of data to find patterns that would be impossible to detect in other ways.

“This study shows the value of bringing new data science techniques together with large-scale data,” said study co-author John Drake, an associate professor in the Odum School. “It was possible because Barbara very cleverly combined disparate sources of information—including both ecological data and biomedical data—into a common database. Then machine learning was used to find patterns.”

This allowed them to pinpoint the traits associated with the roughly 200 rodent species known to harbor pathogens that can infect people. They found that such species tend to start reproducing earlier and have more and larger litters than species that aren’t disease carriers. The model they developed based on these traits accurately identified 90 percent of known disease carriers, and also found more than 150 other species that share those traits but are not—yet—known to host human pathogens.

The next step was to determine where new diseases were likeliest to emerge in the future. By cross-referencing trait information with species range maps from the International Union for the Conservation of Nature, they identified potential new hot spots of infectious disease in the Midwestern U.S., the Middle East and central Asia-locations that were unexpected.

“I was surprised to find that emerging rodent-borne diseases are predicted more from temperate zones than the tropics—I guess just because I carry the familiar stereotype or prejudice that this is where new diseases typically come from,” Drake said. “This result shows how data-driven discovery can correct stereotypes like this.”

The study’s results should prove valuable for public health officials hoping to prepare for, or even prevent, the next new disease.

“With limited resources, we can’t possibly monitor all the animal species that might originate the next emerging infectious disease,” Drake said. “This study can be used to prioritize the species targeted and the regions monitored in biosurveillance.”

The research has also yielded fundamental scientific knowledge and a methodology that can be used to answer new questions.

“We are already actively working on finding potential reservoirs of Ebola virus and other filoviruses,” Drake said. “Next steps are to study more species groups, extend to new questions and improve our models and algorithms.”

Support for the study was provided by a National Institutes of Health Ruth L. Kirschstein National Research Service Award Postdoctoral Fellowship to Han. Besides Han and Drake, co-authors are J.P. Schmidt and Sarah Bowden, both at the Odum School.

For more information about the Odum School of Ecology, see www.ecology.uga.edu. For more about the Cary Institute of Ecosystem Studies, see www.caryinstitute.org.