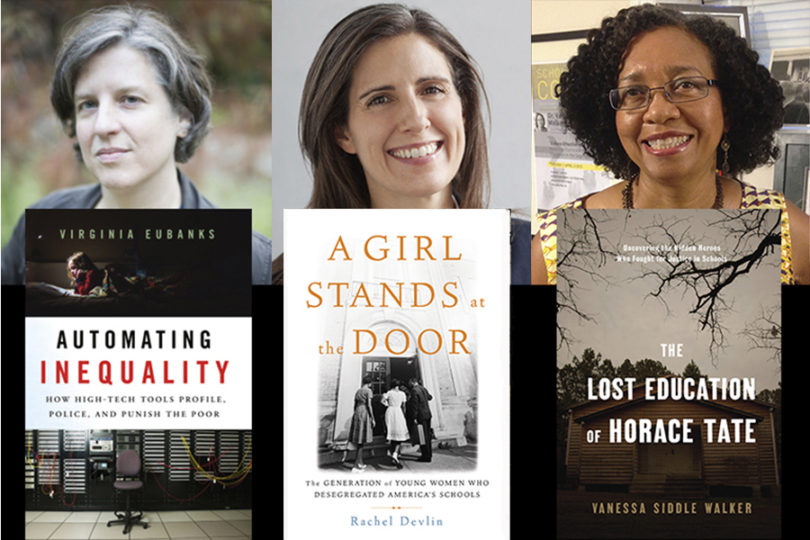 Virginia Eubanks, Rachel Devlin and Vanessa Siddle Walker are the 2019 recipients of the Lillian Smith Book Awards. An award ceremony honoring this year’s winners will take place at the Georgia Center for the Book at DeKalb County Public Library on Sept. 1 at 2:30 p.m. The award ceremony is free and open to the public.

The Southern Regional Council established the Lillian Smith Award after Smith’s death in 1966. Internationally acclaimed as author of the controversial 1944 novel “Strange Fruit,” she was the most outspoken white, mid-20th-century Southern writer on issues of social and racial injustice. The University of Georgia, the Georgia Center for the Book and Piedmont College join the SRC in presenting the awards.

Virginia Eubanks is an associate professor of political science at the University at Albany, SUNY. She is the author of “Digital Dead End: Fighting for Social Justice in the Information Age” (2011) and co-editor of “Ain’t Gonna Let Nobody Turn Me Around: Forty Years of Movement Building with Barbara Smith.” Her most recent book, “Automating Inequality: How High-Tech Tools Profile, Police, and Punish the Poor,” offers a powerful investigative look at data-based discrimination and how technology affects civil and human rights and economic equity. The book examines the impacts of data mining, policy algorithms and predictive risk models on poor and working-class people in the U.S. “Automating Inequality” received the 2018 McGannon Center Book Prize and was shortlisted for the Goddard Riverside Stephan Russo Book Prize for Social Justice.

Rachel Devlin is an associate professor of history at Rutgers University specializing in the cultural politics of girlhood, sexuality and race in the postwar United States. She is the author of “Relative Intimacy: Fathers, Adolescent Daughters, and Postwar American Culture” (2005). In her most recent book, “A Girl Stands at the Door: The Generation of Young Women Who Desegregated America’s Schools” (2018), Devlin draws on interviews and archival research to tell the stories of the many young women who stood up to enraged protesters, hostile teachers and hateful white students every day while integrating classrooms. Among them were Lucile Bluford, who fought to desegregate the University of Missouri’s School of Journalism before World War II, and Marguerite Carr and Doris Faye Jennings, who as teenagers became the public faces of desegregation years before Brown v. Board of Education.

Vanessa Siddle Walker is a professor of African American educational studies at Emory University and has studied the segregated schooling of African American children for more than 20 years. Walker’s book “The Lost Education of Horace Tate” provides a harrowing account of the devoted black educators who battled Southern school segregation and inequality. It offers fresh insight into the Southern struggle for human rights, and reveals little-known accounts of leaders such as W.E.B. Du Bois and James Weldon Johnson, as well as hidden provocateurs like Horace Tate.