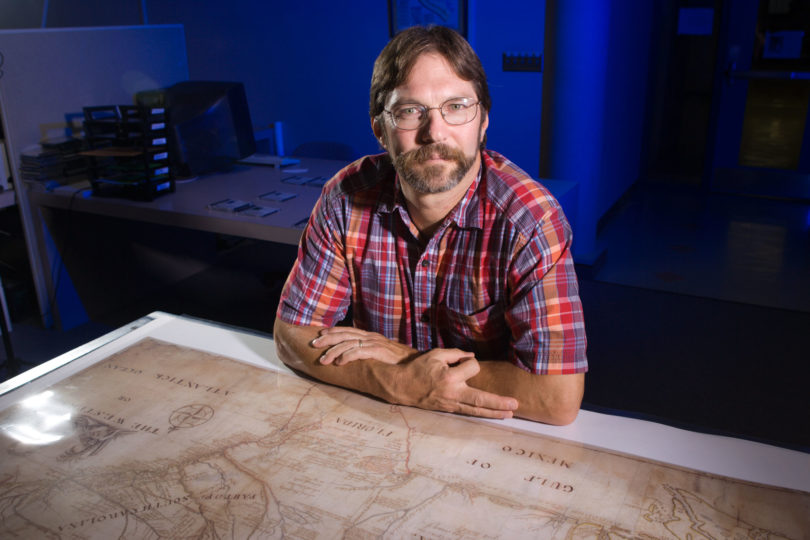 Anthropologist Ted Gragson looks over a copy of a 1721 map showing the settlement patterns by Europeans and Cherokee Indians in what is now the southeastern U.S. Gragson and Paul Bolstad

By 1763, the world of Cherokee Indians in the Southeastern U.S. was in tatters. The French and Indian War had wracked the sprawling Cherokee settlements that stretched from the headwaters of the Savannah River in South Carolina and Georgia to the Overhills towns in eastern Tennessee. Though 75 years would pass before the Trail of Tears would banish the remnants of the nation west to Oklahoma, the tribe watched hopelessly as much of its history rapidly faded.

Researchers have long wondered why the Cherokee settled where they did, building clusters of small towns in fertile river valleys in mostly mountainous areas.
Scientists also have studied why the society collapsed with such relative speed as the 18th century unfolded. Now, two new studies show for the first time that long-held assumptions about Cherokee settlement patterns may have been incomplete at best.

“There has been a lot of speculation about these issues, but it’s often been outside the realm of evidence,” said Ted Gragson, an anthropologist in UGA’s Franklin College of Arts and Sciences. “We were surprised in these studies at the relatively low impact that the Cherokee had on the Southern Appalachian landscape. They really left a very limited footprint on the land they occupied.”

Gragson is co-author of the two new studies with Paul Bolstad, a professor in the department of forest resources at the University of Minnesota. The first research paper was just published in the journal Social Science History, and the second will appear soon in the Journal of Archaeological Sciences.

The new research focuses on the year 1721, the first point after the earliest contact between the Cherokee and the British but before major economic and social changes the tribe underwent in the late Colonial and early American periods.

Researchers believed for more than a century that one reason for the towns’ ultimate demise was a steady decline in natural resources. In particular, the trade of deerskins from the Cherokee to the British for goods increased dramatically as the 18th century progressed. Many who studied the settlement patterns deduced that the distance between towns was because of natural resource limitations.

The new studies, using historical data, mathematical models and statistical inference, imply that an overall lack of natural resources was never the problem, with the possible exception of deer, as the 1800s approached. The new information may help explain subsequent settlement patterns in the South as well.

“[Our] results suggest that the Cherokee population in 1721 did not approach intrinsic landscape limits for obtaining architectural, agricultural, hard mast or fuel wood resources in their environment,” Gragson and Bolstad argue. This stands in sharp contrast to “widely held beliefs” that limits on these necessities affected settlement patterns and their ultimate demise.

Indeed, in his 1775 History of the American Indians, writer James Adair said that Cherokee towns “are still scattered wide of each other because the land will not admit any other settlement.”

Numerous writers have taken that statement as true and repeated it, forming a narrative that has affected histories of Native Americans in the South and even white settlement patterns afterward. In fact, Gragson and Bolstad say, the picture was far more complex, and the supply of natural resources was unlikely to have played a major role.

“We believe that a regional analysis of Cherokee town placement and population makes it possible to build ever-richer syntheses of the forces that shaped the American Indians in the 18th century,” Gragson wrote.

The team’s first contribution to the new research is the data set itself. Using primary and secondary map resources and narrative materials, their new data have enough depth to “sustain several different types of inquiry.” Secondly, they took a novel approach to examining Cherokee settlement patterns by “holding time constant at 1721,” thus avoiding problems inherent in the radical shifts in settlement patterns as war and the encroachment of white settlers began to displace the Cherokee.

The region occupied by the Cherokee in 1721 was huge (nearly 125,000 square miles) and included about 60 towns of varying sizes. And yet the number of Cherokee in this widespread mountain world was probably less than 12,000. While remnants of the original Cherokee inhabitants still live on the Qualla Boundary in North Carolina, most moved to Oklahoma where their descendants now represent the single most populous Indian group in the U.S.

Gragson and Bolstad’s research is part of the Coweeta Long-Term Ecological Research Project, directed at understanding natural and human-caused disturbances on ecological processes over large time and geographic scales in Southern Appalachia. The goal of the collaborative effort is to develop an understanding of the social and economic processes tied to land use and land cover change.

“My present research is directed at understanding how the various legacies of human land use at different time periods over the last 300 years influenced subsequent human land use activities and contribute to contemporary patterns,” said Gragson.

The Coweeta project and Cherokee research  are sponsored by a grant from the National Science Foundation.