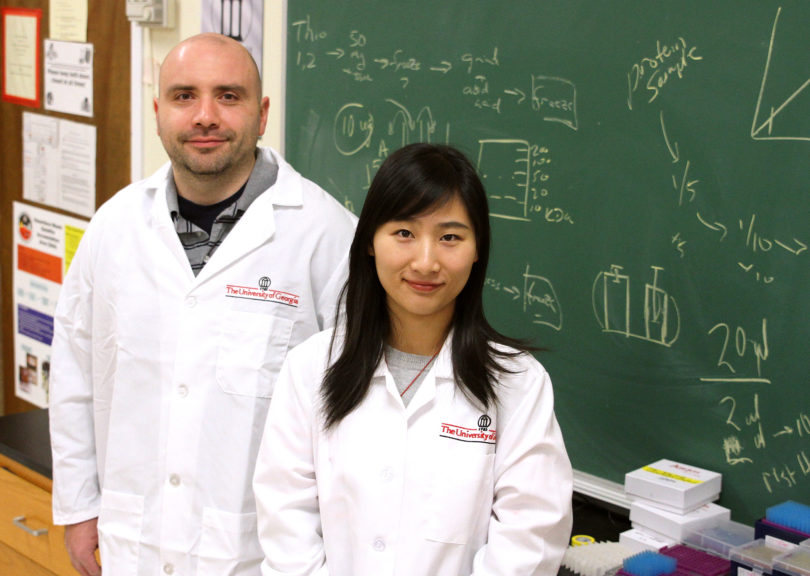 Rob Pazdro and Yang Zhou led a study looking at a new pathway by which genetics regulates aging and disease. (Credit: Cal Powell/UGA)

Athens, Ga. – Scientists at the University of Georgia have shown that a hormone instrumental in the aging process is under genetic control, introducing a new pathway by which genetics regulates aging and disease.

Previous studies have found that blood levels of this hormone, growth differentiation factor 11, decrease over time. Restoration of GDF11 reverses cardiovascular aging in old mice and leads to muscle and brain rejuvenation, a discovery that was listed as one of the top 10 breakthroughs in science in 2014.

Scientists in the UGA College of Family and Consumer Sciences have now discovered that levels of this hormone are determined by genetics, representing another potential mechanism by which aging is encoded in the genome.

Future studies will seek to reveal why GDF11 levels decrease later in life and whether they can be sustained to prevent disease.

The study confirmed results from previous experiments showing that GDF11 levels decrease over time and also showed that most of the depletion occurs by middle age.

In addition, the study examined the relationship between GDF11 levels and markers of aging such as lifespan in 22 genetically diverse inbred mice strains. Of note, the strains with the highest GDF11 levels tended to live the longest.

“Essentially, we found a missing piece of the aging/genetics puzzle,” Pazdro said. “Very generally, we’ve made an important step toward learning about aging and why we age and what are the pathways that drive it. It’s the first step down a long road, but it’s an important step.”

The study, “Circulating Concentrations of Growth Differentiation Factor 11 are heritable and correlate with life span,” was published in the Jan. 16 issue of the Journals of Gerontology and is available at http://www.ncbi.nlm.nih.gov/pubmed/26774117.

Study co-authors are Yang Zhou, Zixuan Jiang and Elizabeth Harris in the college’s department of foods and nutrition and Jaxk Reeves and Xianyan Chen in the Franklin College of Arts and Sciences’ department of statistics.