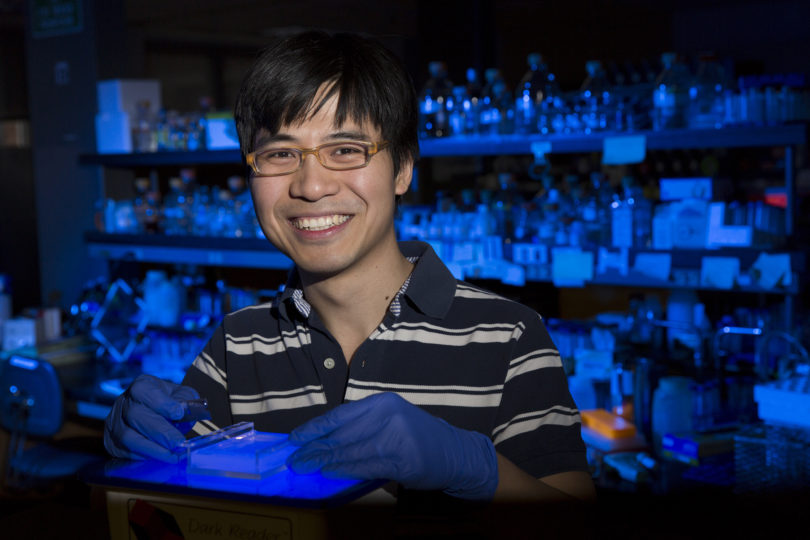 Athens, Ga. – An immune system that helps bacteria combat viruses is yielding unlikely results such as the ability to edit genome sequences and potentially correct mutations that cause human disease.

University of Georgia researchers Michael and Rebecca Terns were among the first to begin to study the bacterial immune system. They now have identified a key link in how bacteria respond and adapt to foreign invaders.

The new study, authored by the Terns and postdoctoral research associate Yunzhou Wei in the Franklin College of Arts and Sciences department of biochemistry and molecular biology, was published recently in Genes & Development.

A bacterium gains immunity against a virus through a sophisticated process of acquiring a fragment of the viral DNA and incorporating the sequence into its own genome. This virus identification sequence is kept in a locus commonly known as a CRISPR, short for clustered regularly interspaced short palindromic repeats.

CRISPR-associated proteins then use the sequence to recognize and destroy viruses.
A CRISPR-associated protein known as Cas9 destroys invading viral DNA and has been co-opted as a tool for programmable genome editing. This new tool provides a way to make gene deletions, corrections of mutations and additions of new genes in any genome.

The UGA study highlights the discovery of a new role of the Cas9 protein in the initial acquisition of the invader sequence.

“The recognition that this enzyme functions both in capture and in killing provides us with a link between those two processes that we think is involved in ensuring that the process is specific for the virus and avoids potential damage to its own genome,” said Rebecca Terns, a senior research scientist in biochemistry and molecular biology. “Our findings implicate Cas9 in the recognition of a secondary, invader-confirmation signal called a PAM.”

In the study, the team describes the basic set of machinery that is required to obtain a specific fragment of viral sequence and insert the fragment in a specific location.

“That Cas9 is involved in both processes represents a major step forward in understanding how bacteria discern which DNA to cut and how the enzyme confirms the decision,” said Michael Terns, Distinguished Research Professor of Biochemistry and Molecular Biology.

Though biologists have studied bacteria for nearly a century, this immune system was only discovered in the last 10 years. The field of CRISPR-CAS bacterial immunity has become the focus of intense interest in biotechnology and biomedical research.

“Cas9 is a component of the immune system that can be engineered by programming it with an RNA of your choice, to go and cut a piece of DNA of your choice,” Michael Terns said. “It’s an enzyme that we can give a sequence and tell it to go cut a DNA that matches.”

The breakthrough illustrates the importance of fundamental research: By investigation of a basic biological pathway—virus defense by bacteria—scientists have developed an unanticipated reagent that could cure genetic diseases in humans.

“Computational biologists looking at the sequences of bacterial genomes made the observations that led them to hypothesize that this system existed. We started doing experiments to test the hypothesis and discovered this immune system,” Rebecca Terns said.

“The way that this immune system captures invader sequences is amazing—and unprecedented in biology.”