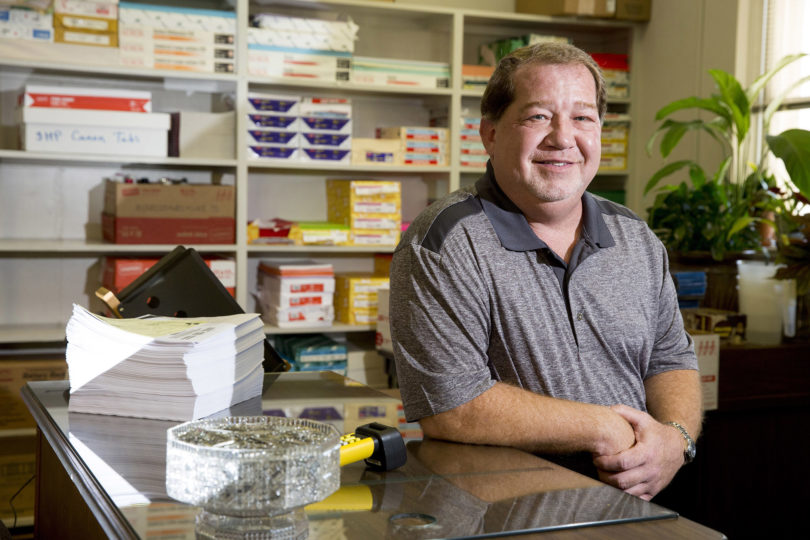 Stan Johnson is the official “paper pusher” for the Terry College of Business.

Each semester, the faculty, staff and students there go through a large volume of paper: handouts, tests, assignments, quizzes and final exams. As the college’s logistical support manager, Johnson helps to oversee the production of these documents with his one and only staff member Tamara Smith, who also sorts through the college’s incoming mail for delivery.

Originally hired in 1983, Johnson worked in the business college’s print shop where he operated the offset printing press before he transitioned into his current position.

Throughout his career, Johnson has seen many aspects of his job change as technology has improved, and the computer became relevant in the workplace.

“The workload is the same,” he said. “We’re just constantly copying class handouts and exams.”

In addition to his duties in the print shop, Johnson is part of Terry’s Staff Representative Group along with other members of the college’s staff.

He also helps each year to organize the Terry Toys for Tots bicycle donation, which he helped start in 2006. This past December, college employees collected $3,746 and purchased
approximately 70 bicycles.

In his spare time, Johnson researches his family’s roots.

“I’m into genealogy,” he said. “So I do a lot of traveling to surrounding states trying to find family records and cemeteries.”

Johnson’s preoccupation with his lineage is no passing hobby. Instead, it’s been a decade-long journey. Using ancestry.com and similar websites, he tracks down the records, birth certificates, death certificates and burial places of his distant relatives. Currently, he can definitively trace his roots back four generations and has tenuous connections with five and six generations back.

“I’ve been doing this for 10 years,” Johnson said. “But I’ve always been interested in it since I was a kid.”

He often checks the burial places of his parents, brother, grandparents, great-grandparents, aunts and uncles. He’s also interested in different kinds of tombstones, the different symbols engraved on tombstones and the various sections in some cemeteries.

“Cemeteries are another one of my passions,” Johnson said. “If I’m visiting a town and see an old cemetery, I’ve got to ride through to see the different sections and the different levels of people’s prosperity. You can tell by these huge monuments that those folk were somebody and had money. Then you’ll go and see a pauper’s grave not too far away.”

Johnson, who has been a UGA staff member for 33 years, still enjoys his work at Terry.

“I love dealing with all the different people,” Johnson said. “It’s always been a good place to work.”