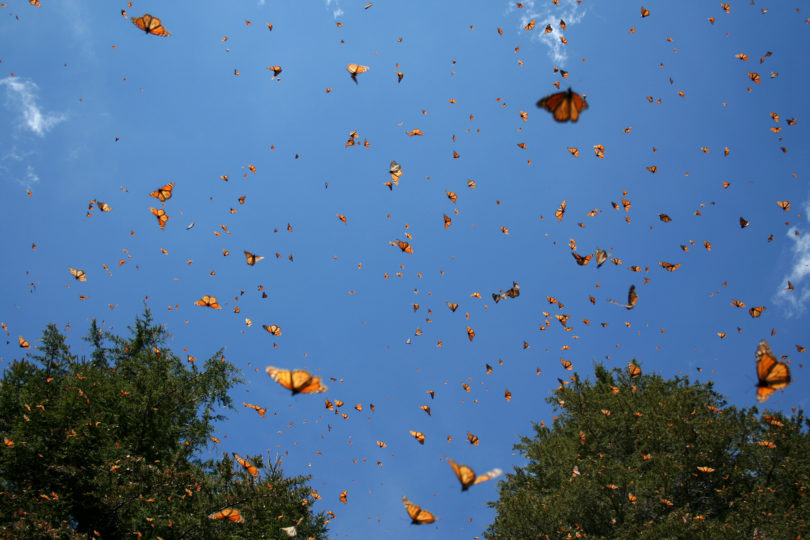 Migratory monarch numbers at wintering sites in Mexico have been declining consistently for two decades, with declines in recent winters being particularly drastic—but we haven't yet been able to pin down exactly why, said Richard Hall of the Odum School of Ecology.

Athens, Ga. – Animals that migrate long distances are often implicated in the spread of infectious diseases, but there is growing evidence that long-distance migration may actually lower the risks of pathogen transmission in some cases.

Ecologists at the University of Georgia have developed a mathematical model that helps explain this pattern across different species. Their work, which appears in the Journal of Animal Ecology, could help scientists assess risks from infectious diseases and inform conservation decisions.

Lead author Richard Hall, an assistant research scientist in the Odum School of Ecology, was inspired to create the model by field studies done by his coauthors, Odum School associate dean Sonia Altizer and former postdoctoral researcher Rebecca Bartel, now with the U.S. Fish and Wildlife Service. Their work showed that monarch butterflies that undertake the longest migrations tend to have lower levels of pathogens than those that migrate shorter distances or not at all.

“When you have empirical evidence, you see an interesting pattern, and it might point toward a mechanism,” Hall said. “What you can do with a model is test that very formally across species.”

Hall said in this case, two mechanisms are at work. The first, known as migratory escape, occurs as animals periodically leave crowded, contaminated sites where there are many opportunities to pick up pathogens. The second, called migratory culling, happens when infected individuals are too sick to survive migration, meaning that they—and the pathogens they carry—drop out of the population.

Understanding the relationship between disease and migration is important for a number of reasons, Hall said. Some of the pathogens carried by migratory animals, such as West Nile virus, are of serious public health concern. Furthermore, many migratory species are in decline worldwide, due in part to environmental changes along their migration routes. Disease is another threat to their persistence.

Hall started with a model depicting the migration of healthy animals between a breeding area and a wintering area. These movements were driven by seasonal changes in habitat conditions, such as temperature and availability of food.

He ran the model to determine which migration strategy, in the absence of disease, best balanced the risks of dying during migration against the favorable conditions at distant wintering sites to produce the highest rates of survival.

Then he introduced a pathogen—virtually—to the breeding grounds of the migratory population.

“You would of course have ethical concerns about starting a disease outbreak in an actual imperiled migratory population, but in the model, you can infect animals and see which strategies best buffer them against the negative effects of the emerging pathogen,” Hall said.

He then ran the model and compared how migratory populations fared in the presence and absence of the pathogen by adopting different migration strategies. These ranged from staying put all year to extreme long-distance movement.

To understand how resilient migratory populations were to a variety of pathogens, Hall varied pathogen properties, both in terms of its likelihood to kill its host as well as how easily it infected others—something else that couldn’t be done without using a model.

Hall found that the most effective migration strategy in the presence of a virulent pathogen was for animals to stay a shorter time at their breeding grounds than environmental conditions dictated, even though that meant foregoing some opportunities for reproduction.

“What this research shows is that by migrating a long way, some of these species might be buffered against the worst effects of pathogens,” Hall said. “But it also shows that anything that could impede this long-distance movement—habitat deterioration along migratory routes or changing climatic or urban conditions that mean that migratory animals stay around longer—could have a negative cost.”

Hall and his colleagues are now working on understanding the bigger picture of migration, disease and the decline of migratory species, starting with monarch butterflies.

“Migratory monarch numbers at wintering sites in Mexico have been declining consistently for two decades, with declines in recent winters being particularly drastic—but we haven’t yet been able to pin down exactly why,” Hall said. Possibilities range from habitat loss at wintering grounds to the loss of milkweed—their principal food source—in the Midwest.

Another culprit might be the relatively new behavior of people planting exotic milkweeds that allow the monarchs to forego migration altogether and stay at their breeding sites year-round. While that might buffer them against the negative effects of habitat loss at wintering grounds, it might also be helping to spread a disease with a high mortality rate.

“We don’t know yet whether the addition of this new migratory behavior is going to be a net plus or minus, but it’s something that we can explore with models,” Hall said. “We’re very motivated to get to the bottom of it.”

Altizer agreed. “Hopefully we can take this general model already developed, add what we know about monarch migration, reproduction, survival and infection, and better predict how future environmental change will impact pathogen risk for these butterflies,” she said.

The research was supported by the McDonnell Foundation, the National Science Foundation and a Ruth L. Kirschstein National Research Service Award through the National Institutes of Health. The paper is available online at http://onlinelibrary.wiley.com/doi/10.1111/1365-2656.12204/full.