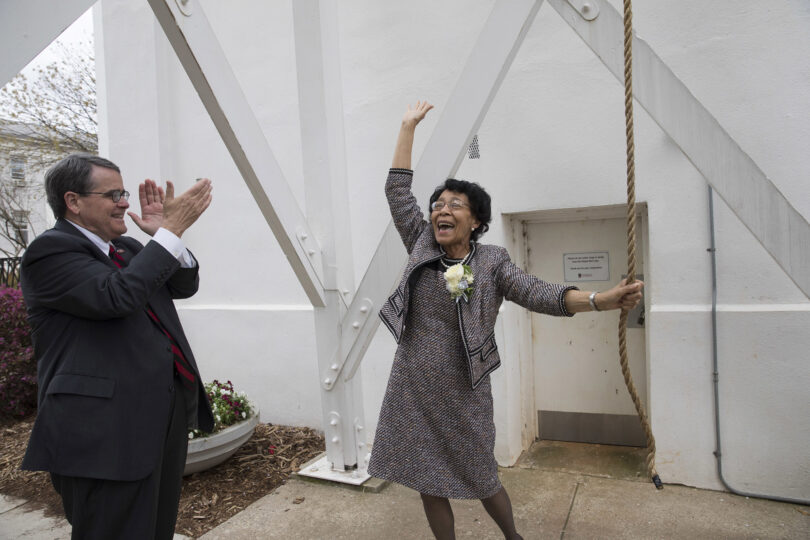 Following her 19th annual namesake lecture in April 2019, Mary Frances Early takes a moment to participate in a campus tradition for the first time by ringing the bell at the UGA Chapel as President Jere W. Morehead applauds. The USG Board of Regents approved the naming of the College of Education in her honor in October 2019. In February 2020, the university celebrated the college’s naming honor. (Photo by Peter Frey/UGA) 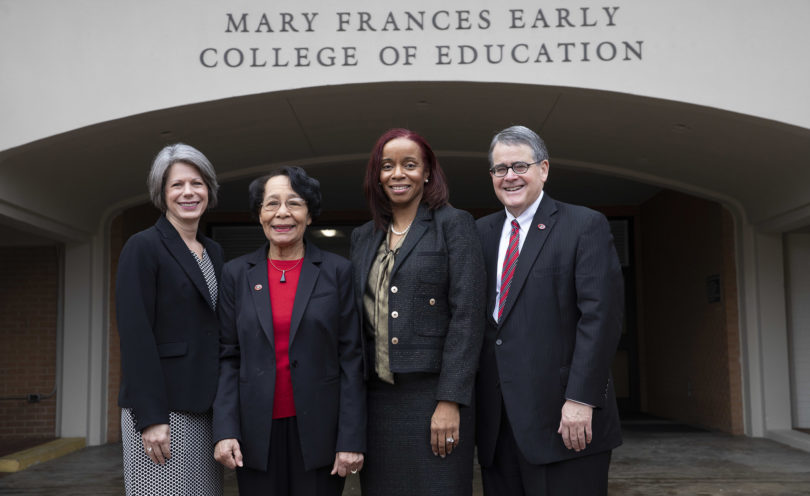 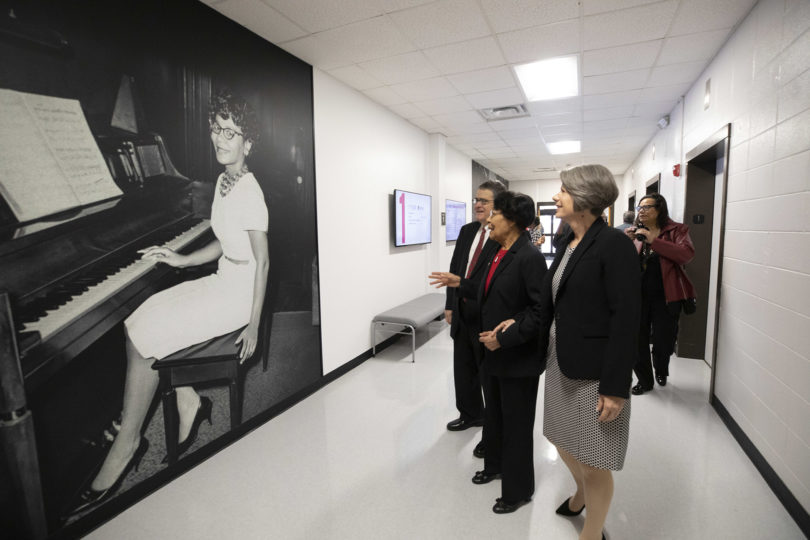 Mary Frances Early reacts to a photo of her as a young woman in an exhibit honoring her inside Aderhold Hall. (Photo by Peter Frey/UGA) 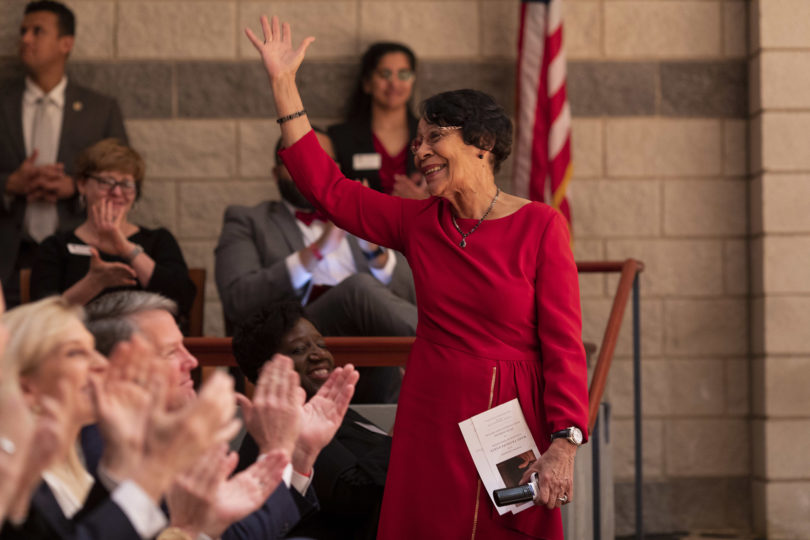 Mary Frances Early acknowledges the audience during her namesake lecture and College of Education naming ceremony in her honor in Hugh Hodgson Concert Hall in February 2020. (Photo by Andrew Davis Tucker/UGA) 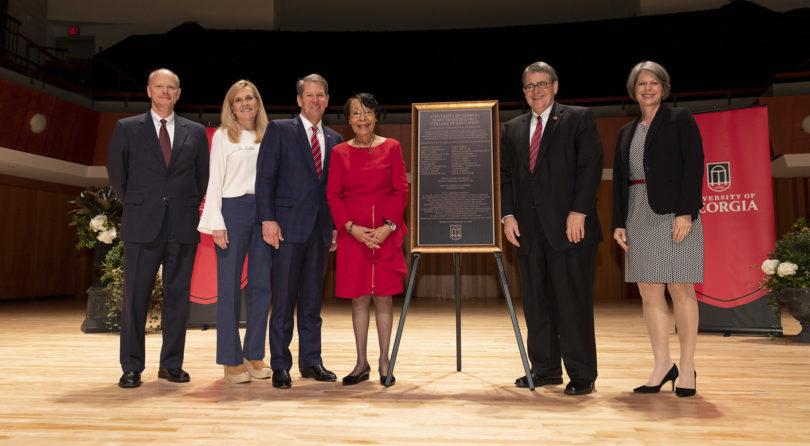 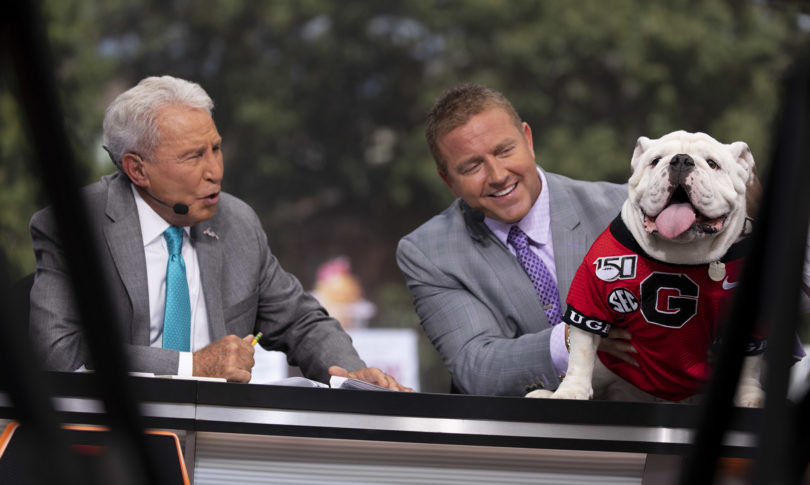 ESPN College GameDay hosts Lee Corso and Kirk Herbstreit spend some time with Uga X on the Myers Quad before the Bulldogs take on Notre Dame on Sept. 21, 2019. (Photo by Andrew Davis Tucker/UGA) 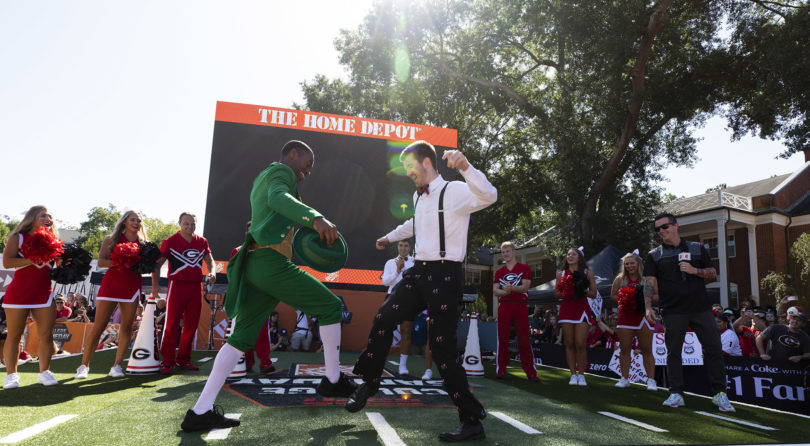 UGA’s Mic Man Chip Chambers does a dance with his counterpart, Notre Dame leprechaun Samuel Jackson, during ESPN GameDay activities before the two schools faced each other Sept. 21, 2019. (Photo by Andrew Davis Tucker/UGA) 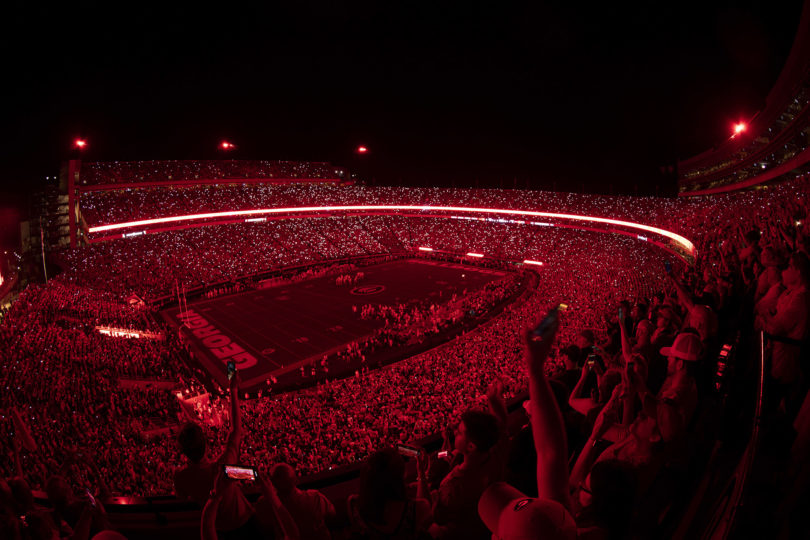 An LED light show illuminates Sanford Stadium red at the beginning of the fourth quarter of the game against Notre Dame on Sept. 21, 2019. A record crowd of 93,246 roaring fans watched the Bulldogs defeat the Fighting Irish 23-17. (Photo by Andrew Davis Tucker/UGA) 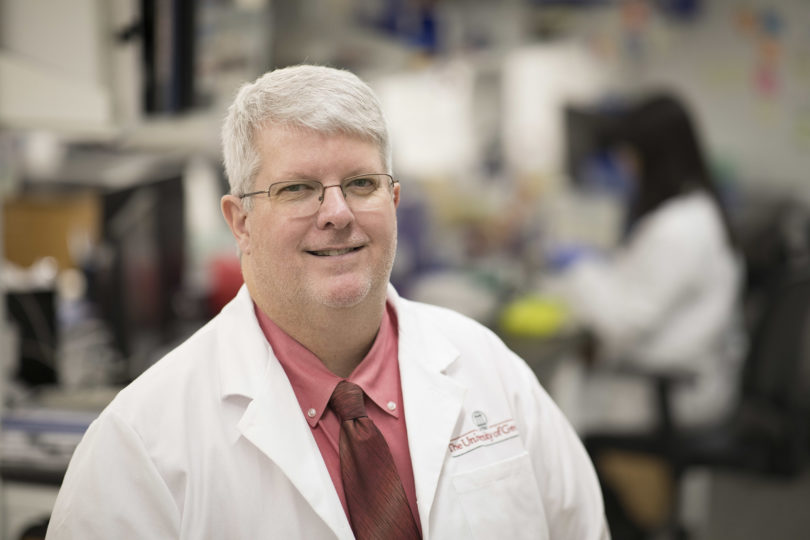 Ted Ross, Georgia Research Alliance Eminent Scholar of Infectious Diseases in UGA’s College of Veterinary Medicine and director of UGA’s Center for Vaccines and Immunology, is leading a team that received a National Institutes of Health grant worth up to $130 million over seven years to develop a new, more advanced influenza vaccine. (Photo by Peter Frey/UGA) 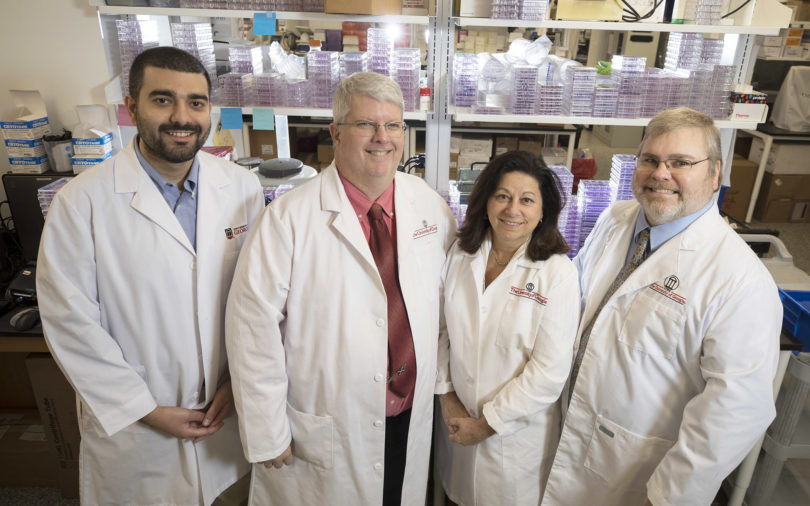 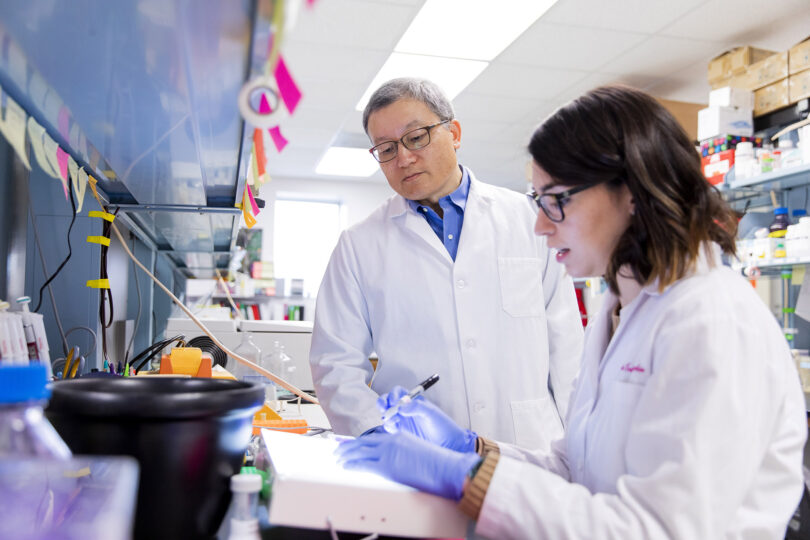 Professor Biao He works with Ph.D. student Maria Huertas-Diaz in his lab in February 2020. He developed a COVID-19 vaccine candidate that has proven successful in early test models. (Photo by Andrew Davis Tucker/UGA) 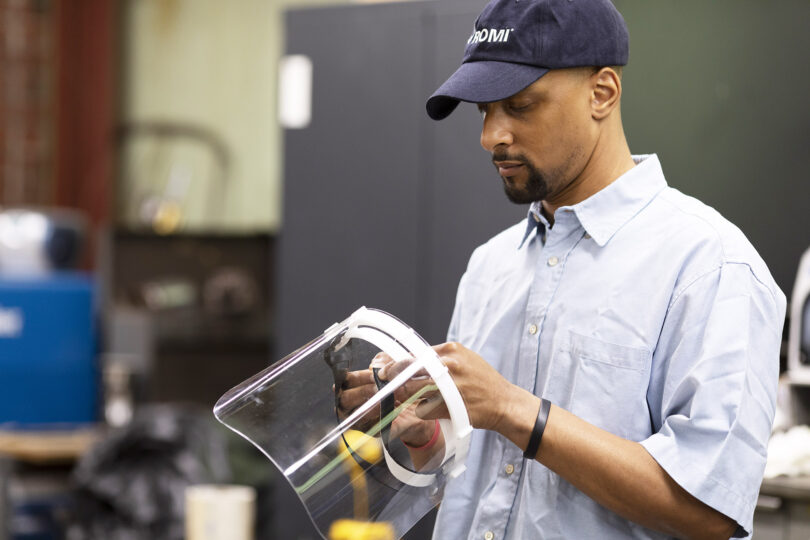 Instrumentation Design Engineer Carlos Barrow following social distancing guidelines as he assembles a face shield in the Instrument Design and Fabrication Shop. Students, faculty and staff from the fabrication shop, the College of Engineering and UGA Libraries have designed and manufactured hundreds of medical face shields for local health care workers. (Photo by Andrew Davis Tucker/UGA) 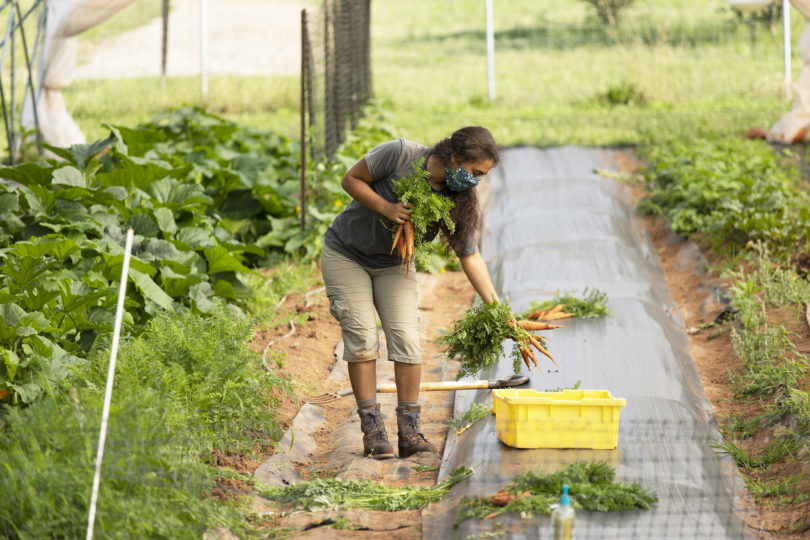 AmeriCorps VISTA worker Morgan Watson pulls carrots in a greenhouse during harvesting at UGArden. The garden, along with the Office of Service-Learning and State Botanical Garden of Georgia, have helped to keep student-run Campus Kitchen serving meals to people in need in the Athens community during the pandemic. (Photo by Andrew Davis Tucker/UGA) 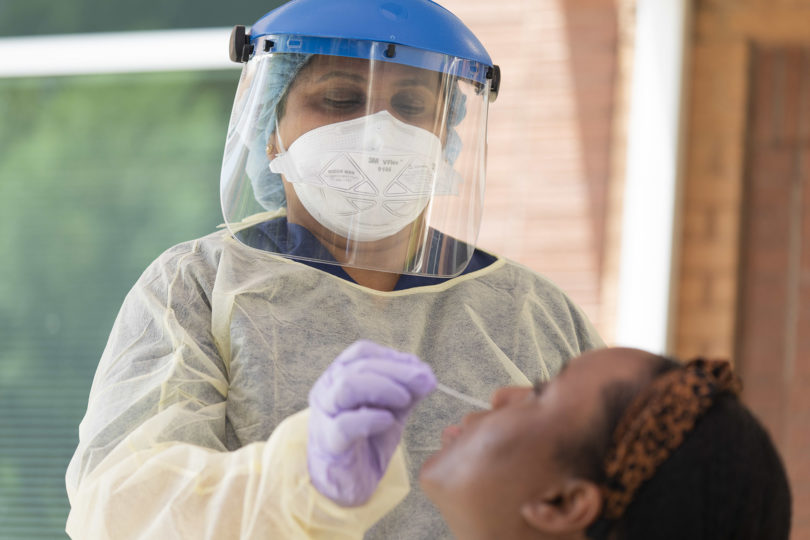 Dr. Satya Thippareddi administers a COVID-19 test to a student at the Gold Clinic at the University Health Center. (Photo by Andrew Davis Tucker/UGA) 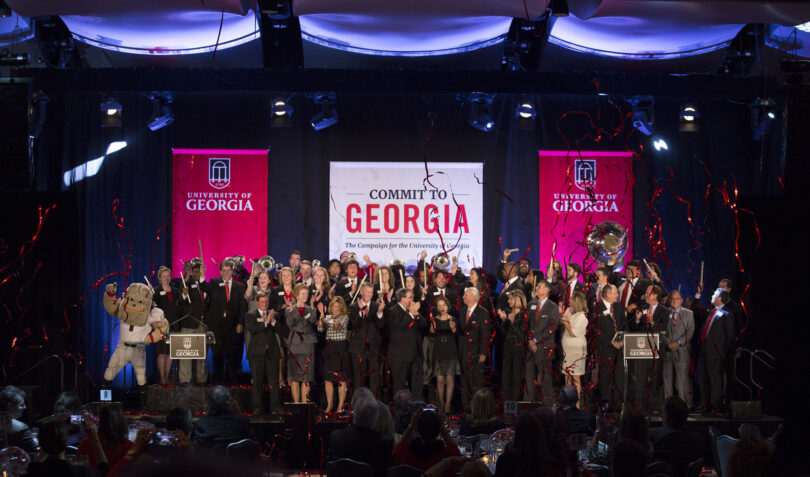 President Jere W. Morehead, surrounded by students and supporters, kicks off UGA’s Commit to Georgia Campaign at the Georgia Aquarium in Atlanta in November 2016. The campaign concluded June 30, 2020, with a record-setting $1.45 billion. (Photo by Andrew Davis Tucker/UGA) 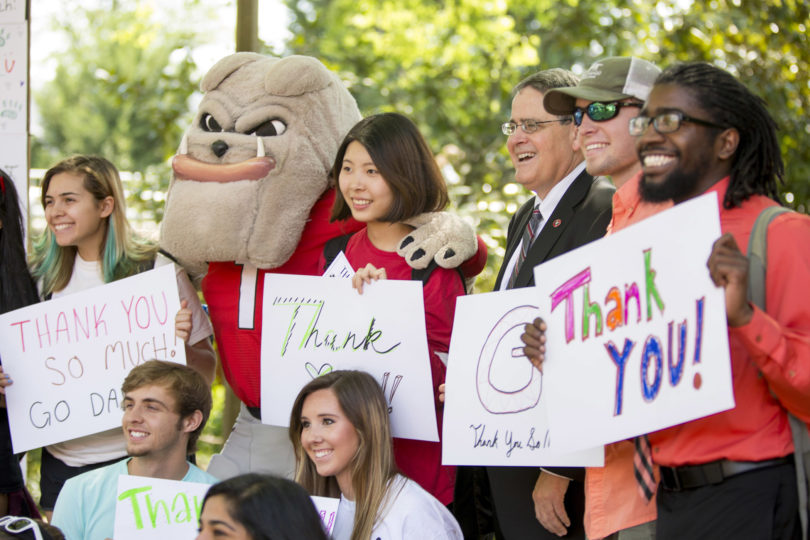 President Jere W. Morehead and Hairy Dawg pose with students who are displaying personal notes to donors at a Thank-a-Donor Day in April 2017. (Photo by Dorothy Kozlowski/UGA) 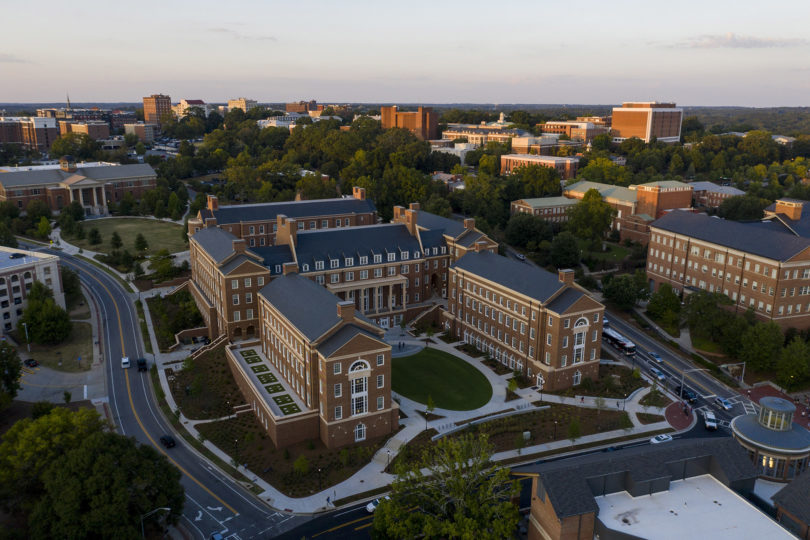 The Terry College Business Learning Community, one of numerous facilities that came to life thanks in big part to private donations from the Bulldog Nation. (UGA photo)

The University of Georgia’s 2019-2020 academic year began much like any other. The relative quiet of the summer months was replaced with the nearly perceptible hum of students, faculty and staff preparing for another semester of learning, research, service and, of course, hopes for a successful season on the gridiron.

It goes without saying, though, that this year was anything but typical. Here, we take a look back at some key accomplishments from UGA’s most recent academic year, memories that celebrate the courage and determination that helped us persevere through uncertain times.

In February, the university held a ceremony to celebrate the naming of its College of Education in honor of Mary Frances Early, UGA’s first African American graduate and a pioneering music educator.

Early became the first African American to earn a degree from the University of Georgia when she graduated on Aug. 16, 1962, with a master’s degree in music education. She later returned to UGA to earn a Specialist in Education degree.

“With her historic legacy at the University of Georgia, it is fitting that Ms. Early is making history once again as the first African American to have a college or school named in their honor at this institution,” President Jere W. Morehead said at the ceremony.

Early said during the ceremony: “We will always need good educators, and to have the College of Education named in my honor, I can’t even describe how wonderful that is. Even after I’m gone it will still be there. I want to thank all of the people who made this happen.”

In the world of collegiate athletics, all eyes were on Athens on Sept. 21 for one of the most anticipated football games in recent history, with No. 3 UGA taking on No. 7 Notre Dame at Sanford Stadium in front of a record crowd of 93,246 roaring fans.

Campus was buzzing with anticipation from the early morning, when many gathered in Myers Quad for the College GameDay broadcast, until the prime time kickoff televised on CBS.

If fans were nervous before the game, their anxiety peaked when the teams ended the half with UGA trailing 10-7. But our offense came alive during the second half, and the Dawgs fought their way to a 23-17 victory in what was largely a defensive battle against the Fighting Irish.

Before this historic game UGA and Notre Dame met in 2017 in South Bend, Indiana, where the Dawgs emerged victorious after a hard-fought 20-19 game. The only other meeting between the two college football goliaths took place in the 1981 Sugar Bowl, in which legendary running back Herschel Walker helped lead the team to a 17-10 victory.

Shortly after our victory on the gridiron, UGA researchers celebrated their own win by signing a contract with the National Institutes of Health worth up to $130 million over seven years to develop a new, more advanced influenza vaccine designed to protect against multiple strains of influenza virus in a single dose.

The project, led by Ted M. Ross, Georgia Research Alliance Eminent Scholar of Infectious Diseases in UGA’s College of Veterinary Medicine and director of UGA’s Center for Vaccines and Immunology, includes specific attention to vaccine research for high-risk populations, such as the elderly and those with preexisting medical conditions.

“The vaccines we will develop could eliminate some of the guesswork in this process by protecting against multiple forms of influenza, even those we don’t know exist yet,” Ross said.

Responding to a community in need

In early 2020, many UGA researchers shifted their focus to COVID-19: striving to develop potential vaccines and treatments, forecast the spread of the virus, and mitigate its societal impact. Following the cessation of in-person instruction in mid-March at all USG institutions, COVID-19 began to place incredible stress on institutions around the state. Hospitals were hit especially hard as doctors and nurses facing shortages of critical protective equipment did everything they could to help people suffering the worst effects of the coronavirus.

The shields, which help protect health care providers from droplets, aerosols and other contaminants while treating patients, were produced through a collaboration that included the UGA College of Engineering, UGA Libraries and the Instrument Design and Fabrication Shop, a unit of UGA’s Office of Research.

The student-run Campus Kitchen program also expanded its operations during the early days of the COVID-19 pandemic not only to continue service to its senior clients but also  to provide nutritious snacks and quick meals for employees at Piedmont Athens Regional Medical Center.

The prepared platters of food were meant to provide hospital staff—everyone from ICU nurses to the cleaning crew—with an energy boost while also serving as a “thank you” for their hard work.

“We decided early on as a staff that this was a priority and that our senior clients depend on the meals that are provided through Campus Kitchen,” said Shannon Brooks, director of UGA’s Office of Service-Learning. “I think this says a lot about UGA’s commitment to public service. There’s a reason people are in the jobs that they’re in. They have that mentality that this is what we do. It’s part of our DNA as public service professionals at UGA.”

The center continues to offer no cost regional webinars to business owners throughout the state that cover business plan development, financial best practices, communications strategies and other steps necessary to pivot their businesses after COVID-19.

Four years ago, UGA launched the public phase of the Commit to Georgia campaign, the most ambitious fundraising effort in university history, which was created to help remove financial barriers to students, enhance UGA’s learning environment and help researchers tackle some of society’s most pressing problems.

That funding has allowed UGA to create 3,600 new scholarships, more than doubling the amount of annual financial aid distributed by the UGA Foundation to students. Of those, 528 are endowed Georgia Commitment Scholarships, the need-based aid program launched by President Morehead in January 2017.

Private giving also has supported cutting-edge facilities for our students, helping to build Delta Hall in Washington, D.C.; the Veterinary Medicine Teaching Hospital; the Business Learning Community; the West End Zone of Sanford Stadium; the William Porter Payne and Porter Otis Payne Indoor Athletic Facility; the Alice H. Richards Children’s Garden at the State Botanical Garden of Georgia; and a variety of other projects, resulting in over 900,000 square feet of new learning and activity space.

Since the campaign’s launch, private support has also created nearly 100 endowed faculty positions, an increase of 42 percent. These positions allow UGA to attract and retain world-class faculty who can inspire generations of students and place UGA’s research enterprise among the nation’s best public universities.