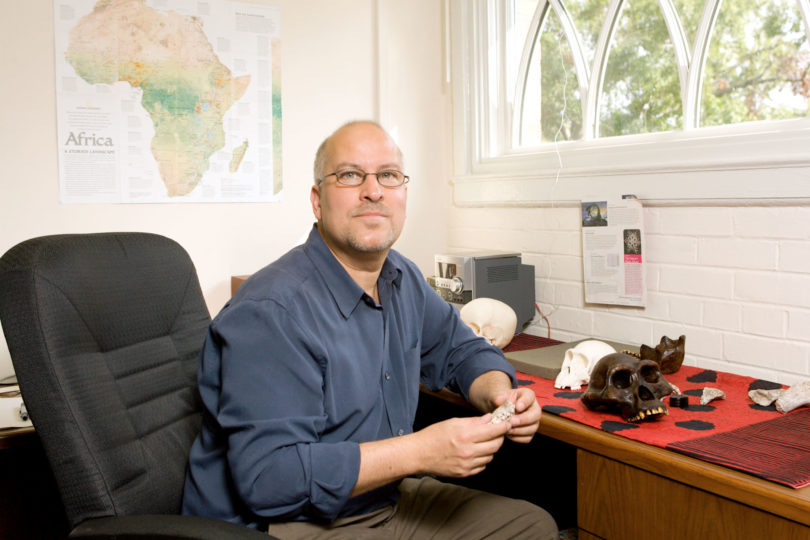 No one knows how the child died. Perhaps disease claimed her or some kind of accident, but she was buried in what was then a rich river delta in east Africa. Now the area is arid, and when scientists unearthed the remains several years ago, she had been in the earth for a staggering 3.3 million years.

The find, reported in the journal Nature in September, rocked the scientific world. The child was about 3 when she died, and her remains-fossilized in a block of sandstone-represent “the earliest well-preserved child ever found in the human lineage,” according to a story in The New York Times.

An assistant professor of anthropology in UGA’s Franklin College of Arts and Sciences, René Bobe, was part of the team reporting the find. The group was led by Zeresenay Alemseged of the Max Planck Institute for Evolutionary Anthropology in Germany, and the report in Nature led to worldwide publicity.

“It was amazing when we first saw it,” said Bobe, a native of Chile who joined UGA in August. “In this block of sandstone, much of the face and cranium were visible. We could see from the beginning that it was almost a complete specimen.”

The team found the child’s fossilized remains in a desert area of Ethiopia, not far from where a 3.2 million-year-old adult female fossil called “Lucy” was discovered in 1974. The area is called the “badlands” of the Great Rift Valley and is tremendously rich in fossil remains. Some in the media began to call the child “Lucy’s baby,” since they were both members of the Australopithecus afarensis species.

Alemseged told reporters in Ethiopia that the child’s “completeness, antiquity and age at death make this find unprecedented in the history of paleoanthropology.”

Bobe, who came to UGA from the State University of New York at Buffalo, is a biological anthropologist and paleoanthropologist who studies the fossils of mammals and attempts to use what he finds to reconstruct the environments in which the creatures lived.

“I’m also interested in the broader relationship between climate change and evolution,” he said. “In East Africa, there’s a deep time record spanning several million years. I look at how fauna change over time in relationship to climate.”

Bobe was barely at his desk in Baldwin Hall when the international furor broke over “Lucy’s baby”-a child the team named “Selam,” which means “peace” in Ethiopia’s Amharic language. Bobe has worked in the Dikika region of Ethiopia for many years, including at the “Lucy” site, which is only a few kilometers away.

Much of the associated skeleton of Selam is still in the sandstone block, despite the fact that it was first discovered nearly six years ago. Still, the team has worked deliberately, since so much can be learned from the discovery.

Already, the scientists understand that the child was a hominin-the early group that includes only humans and our extinct ancestors-and that, according to the Nature paper, “she was probably buried as an intact corpse shortly after death during a major flood event.”

The research showed that Australopithecus afarensis walked upright, said Tim White, one of the scientists who named Lucy’s species, in an interview with the Times. Researchers have thought for some time that afarensis is among the earliest direct ancestors of humans. The discovery is by far the oldest fossil child ever discovered.

Bobe has worked mostly in Ethiopia and Kenya, and indeed will be heading back to the Dikika site next month to resume work on the fossil-rich area where Selam was discovered. He says the area, which is now a desert, is a difficult place to work because of ethnic clashes that often makes it necessary to have guards while working. When the child was alive, however, the Dikika region was a rich river delta.

Bobe’s part in the research is to study fauna associated with the specimens and use what he finds to recreate the environmental record. What he found in the area around Selam’s grave was astounding-fossilized elephants, rhinoceroses, antelopes, impalas, hippopotamuses and even a few monkeys.

“This area is very large, and we have really just touched the surface,” says Bobe. “There is so much more there to be studied.”

Bobe earned his bachelor’s degree from Pomona College in California in 1983 and his doctoral degree from the University of Washington in 1997. He was part of the department of paleobiology in the National Museum of Natural History at the Smithsonian Institution in Washington, D.C., before accepting the job at SUNY Buffalo. He has retained adjunct faculty status with the Smithsonian.

“It’s typical to find fragments, since hominins were not very abundant,” says Bobe. “When we do find them, it’s usually a fragment of a mandible or a leg bone. To find a child’s body in this condition is really unusual.”