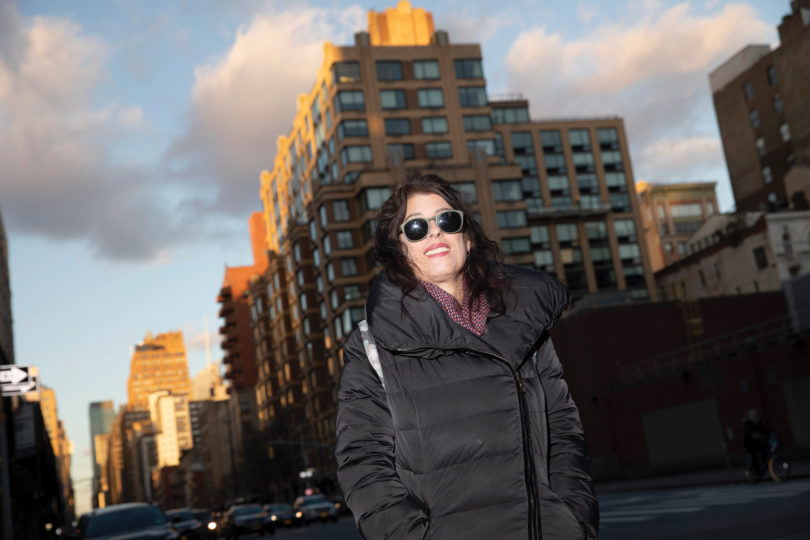 Lynn Appelle's BFA '90 film and TV career includes an Academy Award win in 2002. She is one of just two UGA alumni to win an Oscar. (Photo by Peter Frey/UGA)

Lynn Appelle will be the first person to tell you that she isn’t a documentarian.

A quick glance at her 20-plus year career in the TV and movie industry backs her up. A majority of Appelle’s credits are for line production (akin to being a budget director) or production management. But that one documentary short she produced in 2001—that was a biggie.

Thoth chronicled the life and love of a quirky New York street musician. It was accepted into several festivals, and director Sarah Kernochan submitted it to the Academy of Motion Picture Arts and Sciences for Oscar consideration. Thoth was nominated for Best Documentary Short Subject, and on March 24, 2002, Samuel L. Jackson announced Appelle and Kernochan as the winners.

“The beauty of a documentary is that you really don’t know what’s going to happen. You experience everything live,” says Appelle BFA ’90, who is one of just two UGA alumni to win an Academy Award. Lamar Trotti’s ABJ 1921 original screenplay for Wilson in 1944 was the other.

Appelle admits to being picky with her projects. Rather than parlay her Oscar win into a career in documentary filmmaking, she instead pivoted toward a wide-ranging career that incudes line producing another Oscar-winning film (Still Alice, starring Julianne Moore) and current prestige television. Appelle’s most recent credit is producing Pop TV’s summer sleeper hit Florida Girls (which is actually filmed in Georgia).

A native of Westchester County, New York, who has lived in the city for many years, Appelle majored in photography at UGA and began her career as a freelance still photographer and camera assistant for numerous TV movies, theatrical films, and commercials. One early assignment included working as a camera assistant for legendary sports documentarian Bud Greenspan during the 1996 Summer Olympics in Atlanta.

Some of her fondest memories—along with some of her most interesting work—sprung to life in Athens. Appelle’s days as a student in the late 1980s coincided with the peak of the Classic City’s music scene. Most every night you’d find her hanging out at the 40 Watt, Uptown Lounge, or Georgia Theatre.

“It was a different world. You would just go to a show, bring a camera, and take photos,” says Appelle, who shot not only for herself but also for Flagpole magazine and The Red & Black. From the Indigo Girls to Kilkenny Cats, Ruben Kincaid, and dozens of other Georgia-based artists, Appelle chronicled them all when she was a UGA student. She has hundreds of photos in storage, most of them black and white, many of which have never been published.

“I went down to Georgia in 1987, and I was very naïve,” she says. “But I was also on the cusp of what was happening at the time. It was one of the best things to ever happen to me.”