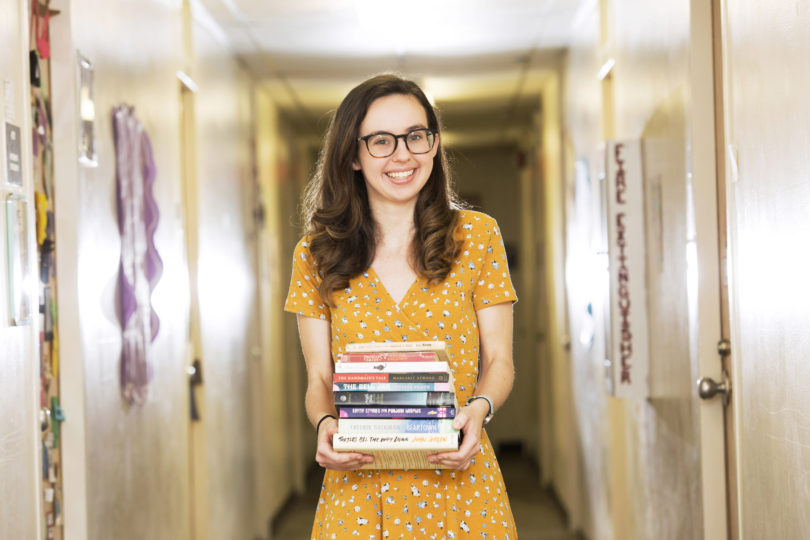 After she graduates in May, Maggie George will head to the University of Tennessee to pursue a master's in information sciences with the eventual goal of becoming a children's librarian. (Photo by Dorothy Kozlowski/UGA)

Maggie George can’t remember a time when she wasn’t “the girl with the book.”

“I would bring books to weddings, church, the dinner table. I didn’t want to have a purse if it couldn’t fit a book in it. Reading helped me to empathize with other people, to put myself in the shoes of someone else,” said George, who graduates in May after three years at the University of Georgia — a year early thanks to AP credit and taking summer classes.

“I think it made me a kinder person. It allowed me a way to escape when I was feeling frustrated or sad. Or whenever I needed a friend,” she said.

George grew up on the Harry Potter books and “The Little Princess.” Now, through her work with First Book UGA, she’s helping to raise the literacy rate in Athens-Clarke County.

“I believe that every kid should have access to books. “It’s heartbreaking when you read about the summer slide that happens when kids don’t have access to books over the summer,” she said. “They come back to school, and they’re just so far behind other kids in terms of reading levels, and that is discouraging. And they keep falling back.”

First Book UGA fundraises throughout the year. The biggest fundraiser is Children’s Literature Trivia Night in November. The group then creates grants for the community to apply for each year. Librarians might request books for students to have over summer break or for books for a book club. The group also volunteers in local schools and works with the drama club at Alps Road Elementary.

George already has two jobs lined up for after graduation. She’ll spend the summer as a residential counselor for the Duke Talent Identification Program and then start work as assistant hall director at the University of Tennessee, where she will be attending the School of Information Sciences to earn a master’s degree.

Her aim is to be a children’s librarian.

She’s always loved books and children. She worked at the library during high school. During her freshman year at UGA, she worked in acquisitions and serials stamping books in the basement of the Main Library.

And when she was volunteering with First Book UGA, where she serves as director of communications, she interacted with local school librarians and realized that that was exactly the kind of job she wanted.

She’s also a mentor in the Clarke County Mentor Program. She’s been with her mentee through three schools during his fourth- through sixth-grade years. She meets with him once a week—usually in the library, where they’ll play board games and talk about his day. Sometimes they’ll talk about books he’s read in class. “It’s about consistency,” she said. “It’s about showing up.” 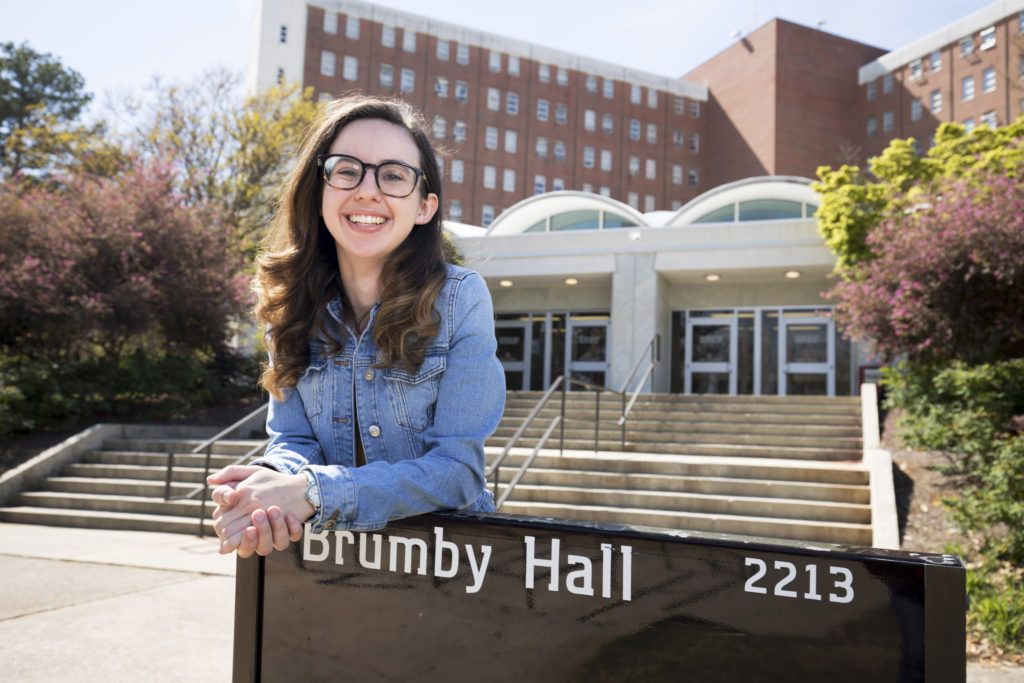 Maggie George works as an RA at Brumby Hall. (Photo by Dorothy Kozlowsk/UGA).

Currently, she works as a residential advisor on the fourth floor of Brumby Hall. There, she supervises 30 women. Her job is mostly community building—putting on events like a body positivity night with help from the University Health Center or holding a game of “So You Think You Know Your Roommate.” She’s had the Clarke County Mentor Program come and talk about the work they do while recruiting students to serve as mentors and had the UGA Career Center come give tips for resumes. She’s in charge of the bulletin boards on her halls and has duty nights, where she goes on rounds on the halls.

Sometimes the job is “high stakes, high pressure,” but she said she’s surprised herself with her ability to stay calm during 4 a.m. duty calls.

“Maggie has dealt with various high-pressure situations and, each time, she demonstrated great poise, composure and compassion when addressing the needs of her residents,” said Candice Peters, a graduate resident at Brumby Hall and George’s boss. “Maggie is known for her presentations, intentional programming and striking bulletin boards.”

She can also add instructor to her resume as last semester she taught an Intro to the Honors Program Seminar to 15 students in UGA’s Honors Program. Thursdays at 2 p.m., she taught students about class registration, internships, study abroad, email signatures, the importance of checking your email and more. “That’s the only opportunity at UGA that undergraduates have to teach other undergraduates,” she said. “The students come away with useful skills. We learn skills everyone should possess, but not necessarily covered in other classes.”

She studied abroad in Costa Rica in summer 2018. A communications studies major, She took creative writing and a Spanish service-learning class. She also did a homestay with a local family and got to see the coffee farms and soap factories.

“We were immersed in the culture. It wasn’t sitting in a lecture hall and taking notes,” she said. “We would go to the community center, organize the books in the library, repaint the walls in cemetery. Not only did I get to improve my Spanish speaking, but I also got to experience what it really meant to live in San Luis, Costa Rica, which is right next to the rain forest. Everyone is so friendly.”

And with her UGA career coming to an end, she said she’s feeling OK with graduating early. “All of the things I did at UGA allowed me to figure out what I would like to pursue next, and I am so glad I did all that I did.”