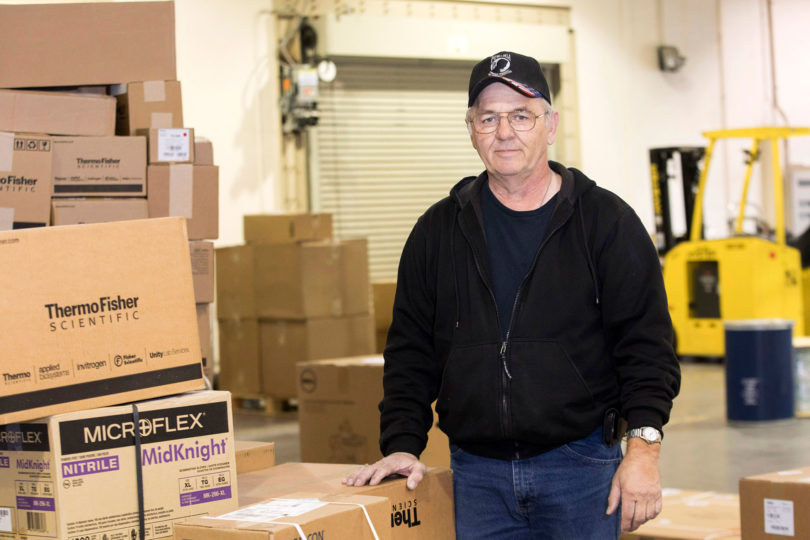 Al Sand has been a billing clerk, a forklift operator and a hostler; he logged 15-hour days driving for Schwan Foods; and he served his country in the U.S. Army. But for the past 24 years, he’s been described as a “vital asset to Receiving Services” and a “vital resource for the entire University of Georgia.” 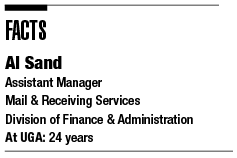 As the assistant manager of Mail & Receiving Services, Sand receives, inspects and ships goods all over campus and across the world everyday. He walks around the east dock of the Administrative Services warehouse with a phone in his pocket, going back and forth with vendors about the quality of the deliveries they’ve made and keeping UGA faculty and staff apprised of what’s happening with the items they’ve ordered.

“It’s a basic job, but I feel it’s a very important and vital job because there are millions of dollars that come through this building,” he said. “You have to multitask a bit. I’ll be checking in freight, inspecting freight and talking to people on the phone at the same time. But you have to be careful not to multitask too much.”

Sand started out as a driver on North Campus, stocking up at the warehouse and then making deliveries. The stability of being home every night at the same time was appealing to Sand, who made 150 stops a day at people’s homes and businesses driving for his previous company. But more importantly, it was appealing to his wife, Karen.

“She wanted me off the road,” he said.

Back then, the workers used typewriters to do their paperwork and relied on pagers to alert them when they were needed. As the years went by and everything went digital, Sand reluctantly started using email but steadfastly refused to convert his checklist for his employees to an electronic version.

“I’m sort of old fashioned in what I do, but it works very effectively in this business,” he said. His checklists consist of steps like counting the cartons placed on a truck and making sure the serial numbers on the cartons match the orders.

“It’s simple, little things that people think are stupid, but you won’t lose anything if you follow the list,” he said.

And his approach seems to be working, he said, because, unlike FedEx, UPS or other companies that deal with freight, UGA Receiving doesn’t lose items.

“Since I’ve been in charge of the floor, I think we’ve only had to buy one thing,” Sand said. “When you tell people in the freight business that you haven’t lost anything, they say you’re full of it. But the checks and balances work.”

Sand was recognized last spring for his devotion to the university and awarded the Unsung Hero Award during the Divison of Finance & Administration’s annual awards celebration. Sand is “reliable and instrumental” in his role at UGA, according to one of his nominators. And his dedication to detail and willingness to fight for his customers doesn’t go unnoticed. He was shocked but deeply honored, though if asked he probably would say it’s all just part of his job.

“What you find out working here is there are a lot of great people working on this campus,” Sand said. “You watch the news and hear all the bad, but when you get to work here, you get to see all the good.”