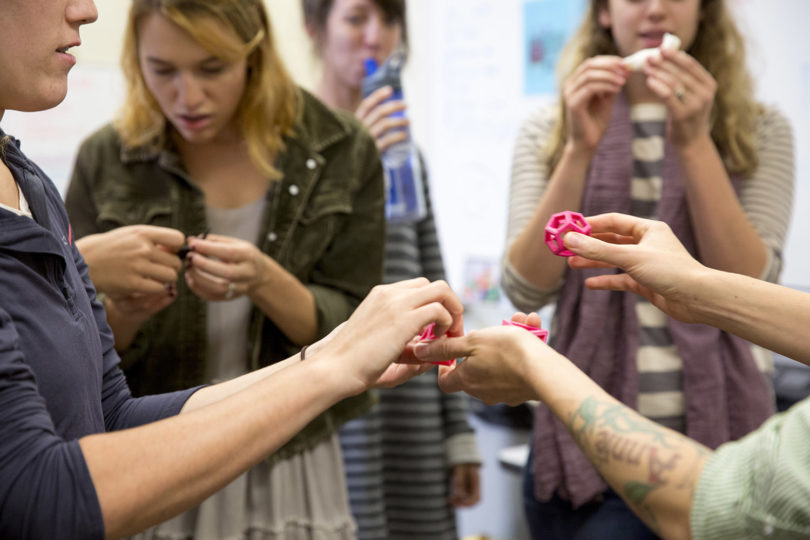 Students in the Intermediate Jewelry and Metal Design class examine 3-D printed objects made by the Maker Bot in the MakerSpace on campus. The space also has a laser and vinyl cutter

While preparing to teach about viruses, Melinda Brindly was trying to find a way to give students in her Introduction to Virology class a better idea of how to visualize the structures of the infectious agents—which are so small they’re measured in nanometers.

To solve that problem, she turned to the MakerSpace at the science library. There she was able to use a 3-D printer to create plastic models, much larger than the actual viruses, to share in class.

“Because of (the models) I was able to really get the students to look into the different structures that viruses can make,” said Brindly, an assistant professor in the infectious diseases department at the College of Veterinary Medicine. “The two-dimensional pictures that I usually show don’t really facilitate the discussion very well; it was much easier for the students to see the symmetry holding a three-dimensional object.”

Brindly said the models went over so well she’s planning to create 3-D models of viruses specifically studied at UGA. She’ll be working with Caitlin Crawford, MakerSpace manager, to do that.

Multiple 3-D printers, which melt and mold plastic layer by layer to create objects, aren’t the only resources available to UGA faculty, staff and students at the MakerSpace, a collaborative effort between the Office of the Vice President for Research and the University Libraries. The space also has a laser and vinyl cutter, soldering irons, a 3-D digitizer as well as electronics such as Arduionos, Raspberry Pis, LittleBits and Makey Makeys.

“We have some pretty cool stuff here,” Crawford said. “We want this to be where you can come in and build your entire project.”

The MakerSpace has been open less than a year, and Crawford was hired this summer. Despite little marketing, the space is used by about 20 students daily.

Students have come in to use the 3-D printers for their studies. Crawford said one ecology major has been printing 3-D topographical maps of islands off the U.S. A geology professor is planning to print fossils, and a math professor used the laser cutter to build gears for a robot he used in class.

“We’ve had some really cool things from across the spectrum done here,” Crawford said.

Crawford has big plans for the MakerSpace moving forward. She said there’s talk of using a room above the current space for even more equipment.

“I want to make upstairs the 3-D printing hub, get more printers and have a couple new different ones, like one for plastic, resin, flexible filaments and food,” she said.

Crawford also wants to add equipment like sewing machines or power tools so a larger variety of students can use the MakerSpace.

“We want people coming in and doing something in here, making things,” she said.

Despite the abundance of new technologies, Crawford said there’s no reason to be intimidated or worry about not knowing how to use the 3-D printer.

“All of this is really easy to learn; people shouldn’t be afraid if they aren’t a techie or programmer,” she said. “Monkeys could use some of these (machines) once they figure out you just press a few buttons and you’re done.”

Crawford also is working to bring in more classes and to expand the MakerSpace’s reach to North Campus and some of the humanities programs.

“Using these tools, I think, is just a good experience because it’s so new and it’s all about design thinking,” Crawford said. “It’s outside of the box, and you have to pull everything out of your brain and use it. It’s so much more than just saying two plus two equals four.

“Here you’re really doing some learning to figure out how to do something, think of all the possible outcomes, figure out where things fail and why,” she said.