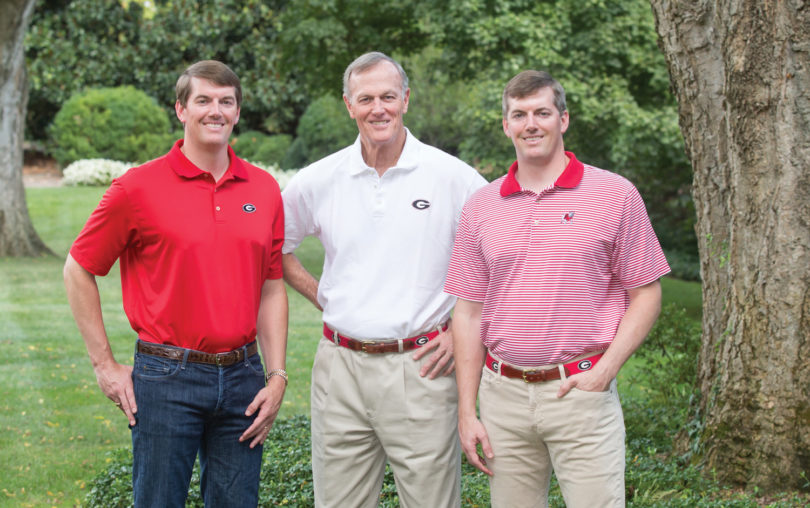 Left to right: Leighton BBA '05, Malcolm BBA '72, and William Liles BBA '05 may live in Nashville, but this family of financial advisors is UGA through and through (Photo by Kim Hargrove/Special)

For many college graduates, the road to a successful career can lead to the bright lights of the Big Apple or the foothills of Silicon Valley. But, sometimes, it ends in their own backyard. For Leighton Liles BBA ’05 and William Liles BBA ’05, the latter proved true—much to the delight of their father, Malcolm Liles BBA ’72.

From their office in Nashville’s West End neighborhood overlooking the Parthenon, the Liles Group at Baird Private Wealth Management serves more than 200 client families across 30 states. These families entrust the Liles Group with almost $1.2 billion of assets under advisement. Because they work primarily with families rather than corporations, there is a personal touch to their work that isn’t always present in other areas of their industry.

“We have some families where we’re working with the third and fourth generations,” Malcolm says. “Clients are important to us because they are our livelihood, but if you work with them over several decades, they become very valuable friends too.”

Malcolm learned the basics of finance as a boy, working in his father’s pharmacy in his native Valdosta. He transferred to UGA after attending Valdosta State College. He majored in business at UGA because he felt it offered the best options for a good career, although he took his time finding exactly what he wanted to do. Liles worked at a textile company and then a bank before relocating to Nashville in 1976. He soon got into financial planning and began building his practice.

Malcolm and his wife, Marion, ABJ ’74, grew their family with the addition of their identical twin sons in 1982. As they got older, as families will often do, dinner conversations frequently included stories about Malcolm’s work. William and Leighton paid attention.

“When we were young, we grew up spending many Saturday mornings with dad at the office,” William says. “We’d play with the typewriters and Quotron machines while he worked. His office was very collegial and we enjoyed the sense of community. He worked a lot but never missed our football or lacrosse games, so we naturally developed an interest in his work.”

When Leighton and William expressed interest in business careers and perhaps entering finance, their father was supportive but also didn’t want to push them one way or another.

“We talked about it,” Malcolm says. “They shouldn’t work for their father right out of college. I wanted them to work for someone else first. They needed to find their own interests and build their own reputations in the business world before they joined me if that’s what they wanted to do.”

That’s exactly what Leighton and William did. Each of them began their career in consumer banking after graduating from the Terry College of Business. After earning his MBA, William joined Malcolm in 2010. Leighton completed his MBA in 2011, and after several years in corporate investment banking, he came to The Liles Group as well in 2018.

“The practice had grown nicely after William joined,” Leighton says. “They needed to hire someone, and the timing was right for me.”

Like their father, William and Leighton are married to Georgia alumnae, and with each now having two young children of their own, family gatherings include plenty of red and black.

“It does make Saturdays in the fall fun,” William says.