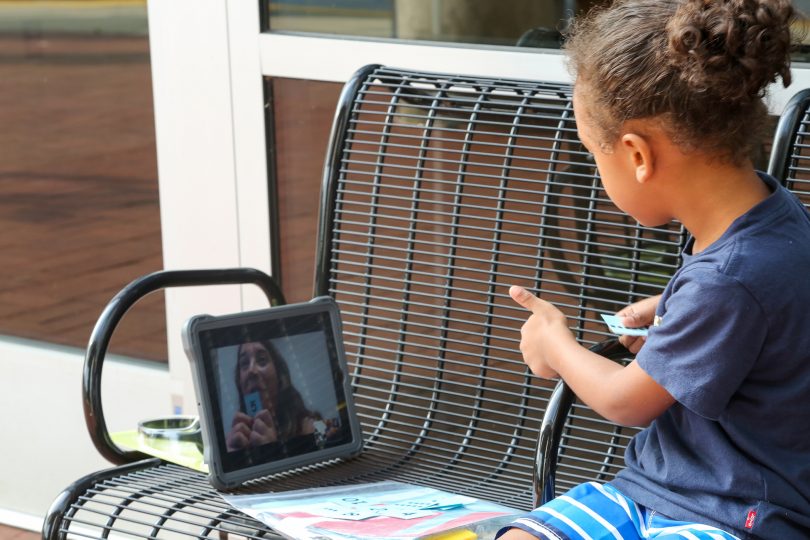 A child attending virtual school outside the Clarke County Public Library in 2020. (Photo by Shannah Montgomery)

But where are the most households lacking broadband access in the state? Fulton County.

Thanks to a groundbreaking map — the first of its kind in the United States — community leaders and telecommunications companies in Georgia can now easily identify broadband dead zones down to a single address and expand access to those areas.

“Approximately 10 percent of the population of Georgia is not served,” said Eric McRae, associate director of information technology outreach services at the University of Georgia’s Institute of Government, who oversaw the map’s creation. “That’s not too bad, or doesn’t seem like it is. But when you actually start thinking about it, that’s a million people that don’t have service.”

When the state launched the Georgia Broadband Deployment Initiative (GBDI) in 2018, making access to high-speed internet a priority for all Georgians, it looked to UGA’s Vinson Institute of Government for help. Before the state could go about addressing the issue, it needed to know how big the problem was.

To figure out who had access to broadband internet and who didn’t, the institute’s information technology staff used a geographic information system data set that contained every address in the state — more than 5 million in total — and matched it to locations serviced by the state’s internet service providers.

McRae and state officials have been besieged with calls from other states and government entities since the map was unveiled.

“Virginia wrote us and said we had changed broadband forever,” said McRae, adding that Montana also had requested information about the map. At their invitation, McRae served on a panel at the annual meeting of the Rural Broadband Association in February. 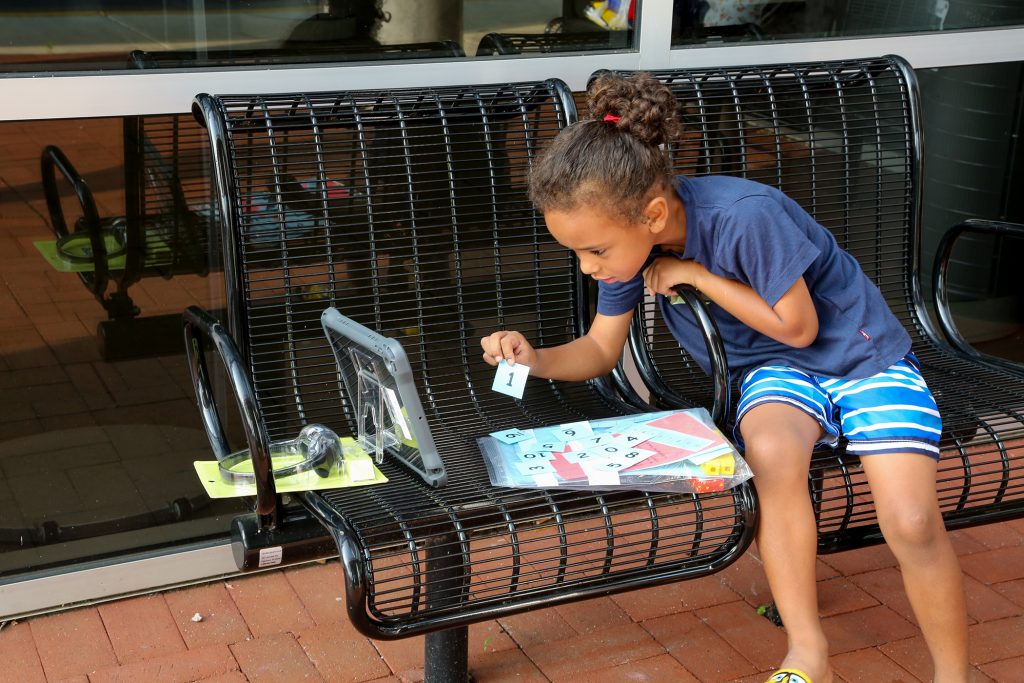 Lisa Allen doesn’t get internet at her house. The district is short on hotspots so she has to bring her four kids, ages 5-15, to the Clarke County Public Library (which is closed to visitors due to COVID-19) and sit outside to use the Wi-Fi so her kids can connect to virtual school. “It’s hard,” said Allen. “We’re just doing our best. I thought there would be other options but that hasn’t happened yet so we’re here.” (Photo by Shannah Montgomery)

GBDI Director Deana Perry said the broadband map, providing a location-level perspective of unserved areas in the state, was key to directing the investment in broadband infrastructure to “better serve individuals, families, businesses and other institutions that are essential to the quality of life for Georgia’s residents.”

“This is the most detailed resource to date that illustrates the digital divide in Georgia,” Perry said.

Reliable, high-speed internet became a critical need this year as millions of Americans began working and schooling from home as a result of the ongoing COVID-19 pandemic.

Like the rest of the country, hundreds of thousands of Georgians went home to residences without the reliable access to broadband internet. But unlike other states, Georgia is now able to accurately find these gaps in coverage and help citizens get connected.

The map, unveiled by Gov. Brian Kemp on July 1, was created as part of the Georgia Broadband Deployment Initiative, a multiyear collaboration between the governor’s office, the Technology Authority and internet service providers.

The location-specific data collected by the Institute of Government shows sizable chunks of the state without reliable access to broadband — much larger areas than previously thought. The Federal Communication Commission map, which states use to determine who has and doesn’t have high speed internet, is ineffective because it identifies an entire census block as served if just a single address in the block has access. 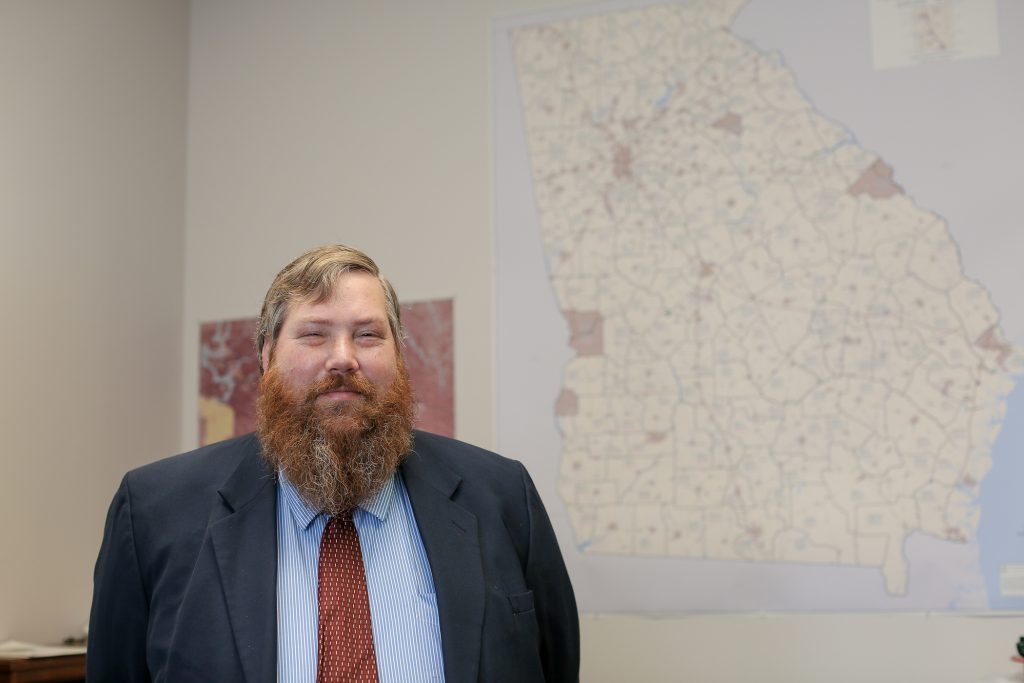 Associate director of the Carl Vinson Institute of Government’s Office of Information Technology Outreach Services Eric McRae worked on a broadband map that shows actual coverage for the state of Georgia. (Photo by Shannah Montgomery)

For example, the FCC map shows Fulton County is covered. But UGA’s enhanced map shows more than 16,000 households are without broadband in Fulton County.

The new map counts a census block as having access if at least 80 percent of its addresses are served speeds of 25 megabytes per second download and three Mbps upload — speeds considered necessary for most online activity, such as video streaming, web browsing and file sharing.

With the granular information from the GIS data in hand, the GBDI team was able to partner with communities and internet service providers to address the gaps in coverage. The General Assembly has budgeted $20 million in this fiscal year, and $10 million next year, to help communities pay for the service. Workshops to help local governments learn how to apply for state grants begin this month.

“When the pandemic started, that’s when the true value of this data became apparent because all of a sudden every kid was sent home from school and told they were going to do online learning from here on out,” McRae said. “All of a sudden, people started asking questions. ‘How many of these kids don’t have access to broadband?’ They wanted to know if we could answer that question.”

Thanks to the map, they could — more than 110,000 Georgia students lacked access. The majority of these students reside in the rural areas of the state in places like Fannin County.

Connecting rural Georgia to the internet

Located at the Georgia border with North Carolina and Tennessee, mountainous Fannin County is home to roughly 24,000 people, many of whom don’t have any access to reliable internet.

There are few internet service providers in the area and connection speeds are often slow. The topography of the region leads to issues with reliable cellular signals, as well. As a result, thousands of residents struggle to find dependable broadband access at home.

“I think this has brought to life the inequities people have, for sure,” said Heather Finley, the director of instructional technology for the Fannin County School District. “Here, it’s not even a socioeconomic inequity. It’s a where you live inequity. … [The map] showed that 40% of our county couldn’t even get internet. Not that it’s slow or that they can’t pay for it, they can’t get it. That’s a big number for us.”

The new map has helped the school district strategically address the issue for its students. Schools have made their Wi-Fi internet signal accessible from their parking lots, buses are equipped with internet for students to use while commuting to school or events, and larger Wi-Fi Rangers — provided by AT&T in partnership with the state — are being placed at apartment complexes and housing developments where up to 30 students can connect at a time.

The most successful approach, however, has been the use of individual Wi-Fi hotspots that students can take to their homes. Fannin County schools used the map to validate its need for better access and nearly doubled their inventory of mobile hotspots, which connect to the students’ school-supplied Chromebooks.

The district’s 140 total hotspots have been vital for its students learning at home, an option given to parents at the start of the school year.

“When all the talk started about making the kids go back to school, I didn’t know what this was going to look like or what we were going to do. … We would not be able to [school at home] without [the mobile hotspot],” said a Fannin County mother of three, who asked that her name not be used in this story. “If the school wasn’t offering them, then we’d have to go purchase our own and see what the prices were.”

The mother, whose youngest child has a preexisting medical condition, elected to have her children learn at home based on the advice of her doctors. Not only did the school district provide her with a hotspot using a Verizon cell signal for her home, but also a second unit on AT&T’s service for her children to use when they stay at their grandmother’s house.

“We could have gone the easy route and told people to drive to our bus, but we knew that wasn’t effective and we were going to have to spend the money,” Finley said. “Luckily, I work for a district that values technology and values our students and puts them first. So, it was a never a question for me of how many can I have, it was get what you need.”

While the majority of Georgians without access to broadband live in the state’s rural areas, there are inequities in more urban communities as well, including Athens.

The Institute of Government map showed underserved sections of Clarke County that were not identified through FCC data. But even in areas where internet is available, the cost of broadband service can often be prohibitive to families, according to McRae.

When the pandemic hit, the Clarke County School District determined that more than 1,200 students needed help accessing the internet from home.

“I don’t think any of us were surprised [by the number of students without broadband internet],” said Taylor Duke, CCSD director of infrastructure support services. “We’re fortunate that we have the infrastructure in place so that we have options to choose from [to help].”

CCSD has utilized eight Wi-Fi Rangers provided by the state, expanded Wi-Fi coverage to school parking lots, and even developed a partnership with the Athens-Clarke County government to provide students with Wi-Fi access at government buildings and parks.

But like Fannin County, the district found that personal, mobile hotspots were the best solution.

“We went that route so they can move the hotspots around with them,” Duke said. “There’s no installation, there’s no waiting, it’s just a really good mobile solution for the kids to use.”

With the entire school district — more than 12,000 total students — learning remotely since last March, CCSD’s existing 500 Wi-Fi hotspots weren’t enough to cover all of the students who needed help. Duke recently purchased an additional 1,200 hotspots and anticipates adding even more.

The Institute of Government and GBDI team are working across the state in other communities, in school districts, and with individual Georgians to find ways to address their broadband needs.

They’re developing ‘greenfield costs’ to help counties estimate the expense of expanding broadband coverage and where they’d receive the best return on their investment. They’ve partnered with private businesses like AT&T, which has donated thousands of Wi-Fi Rangers while also developing discounted cellular plans for governments and school districts. They’re even helping individual residents find national programs to help offset costs, such as the FCC’s Lifeline program, which provides discount broadband service for low-income customers.

The map itself is not a finished project, either. The Institute of Government recently began updating its underlying data with new information provided by 44 internet service providers from across the state. The institute will also use findings from the 2020 census to provide a more accurate estimate for the number of people per household.

The mapping technology developed at UGA could become a national model.

“We are the first state in the nation to go to this level of mapping. No one else has done this,” McRae said. “Our main goal is to get people hooked up with broadband and get access to broadband. Long term I’m sure we’ll be worked out of a job as far as [map making] goes, but there’s plenty of other work to be done.”

The broadband maps can be found at: