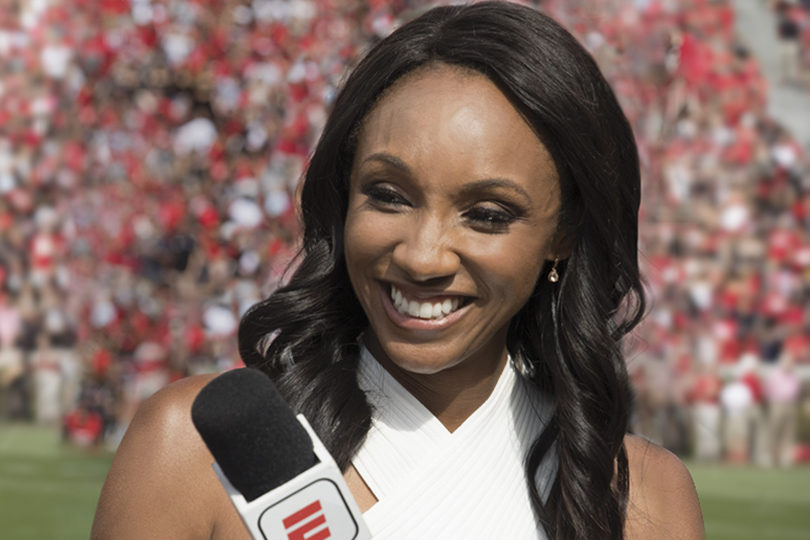 Maria Taylor ABJ '09, MBA '13 is one of ESPN's most prominent, versatile, and well-traveled talents. She makes frequent visits back to UGA, too. On Oct. 17, she will take part in the university's Signature Lecture Series. (Photo by Peter Frey/UGA)

Maria Taylor loves the University of Georgia. Of course, as the lead features reporter for ESPN’s flagship college football program, College GameDay, it’s important to display at least a modicum of journalistic impartiality: She took off her UGA wind-breaker to report from the sidelines of the G-Day game in April.

But Taylor’s fellow broadcasters know where her heart lies, and while she’ll get occasional ribbing, there is sincerity too. While she was reporting from the field at the ACC Championship, play-by-play announcer and College GameDay host Chris Fowler congratulated her on air when UGA won the 2017 SEC Championship.

The reasons for Taylor’s strong ties to the university are easy to discern. She was four-time all-SEC in volleyball for UGA and a starter on the women’s basketball team. She earned her degree in journalism from Grady, then came back and, while working in the sports information office, got her MBA from Terry. She serves on the Grady alumni board, and her younger sister recently graduated from UGA, too.

“The biggest thing I remember about the school is the willingness of everyone to make you be your best self,” says Taylor, who also made the SEC Academic Honor Roll. “I had wonderful professors who pushed you as hard as they could, but they also loved you and let you know you could accomplish any of your goals if you put in the hard work and effort.”

The lessons paid off. In a short period of time, Taylor has become one of ESPN’s most prominent, versatile, and well-traveled talents. She is, at times, a studio host, sideline reporter, game analyst, and features reporter—often all in the same week. Each role requires a different skillset.

“As a sideline reporter, you have to be good at listening, both to your broadcast team so you can add value to what they’re saying as well as to the coaches and players so you can ask good follow-up questions and get a feel for what’s going on with the game,” she says. “As a host, you have to set up your analyst. It’s my job to make sure they shine.”

After debuting on-camera at the Comcast Sports Network, Taylor moved to ESPN in 2014 as the first-ever studio host for the SEC Network. In addition to her studio work, she paid her dues reporting from football and basketball sidelines across the country with a few analyst gigs mixed in.

Maria Taylor on the Winning Edge Leadership Academy, which she co-founded

“Our program is focused around helping women and minorities break into the sports industry because there is obviously a diversity gap. When we find institutions that are hiring, we can act as a bridge to help them find a great, diverse candidate.”

Her big break came in fall 2017 when she joined the College GameDay crew, a tightknit group that includes fellow Bulldog David Pollack M ’05. “I was so excited to join this show that I had watched when I was in college myself,” she says. “They are an amazing group of individuals, and they really are like my family.”

While College GameDay is Taylor’s most well-known gig, her role at ESPN continues to expand. In March 2018, she stepped into the anchor chair for ESPN’s coverage of the NCAA Women’s College Basketball Tournament and shared the desk with her mentor and former coach at UGA, Andy Landers. It’s a job she hopes to keep.

Now, though, it’s back to College GameDay, and Taylor is eagerly anticipating her second year. “I feel like I own the role; I’m not just babysitting it,” she says. “In your second year, you are much more comfortable, and you know what’s expected of you. The second year is better for anyone. Just ask Kirby Smart!”