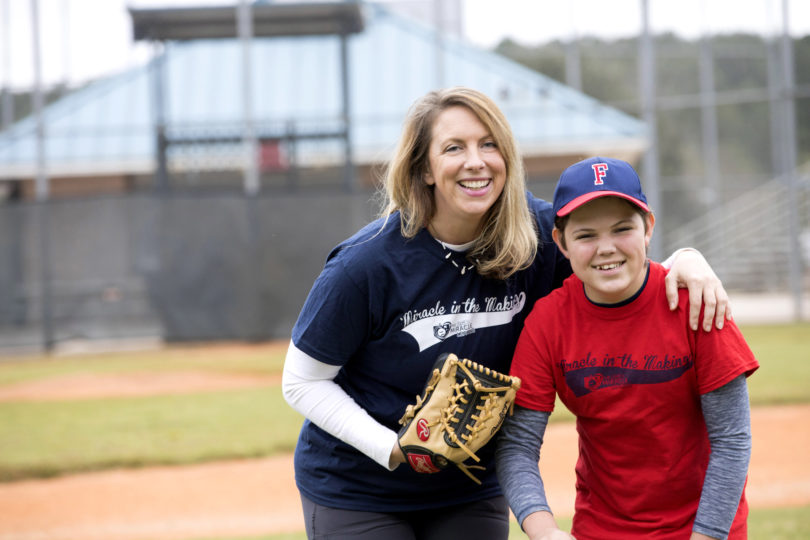 Marine Extension agent Jill Gambill plays baseball with her 12-year-old son, Cheyten, which is one of his favorite activities as part of Extra Special People. (Photo credit: Dorothy Kozlowski)

Gambill describes ASD, which affects communication and behavior, as an invisible disability.

“The people diagnosed with it are not in wheelchairs,” she said. “There’s not something visible that you can immediately pick up on that would make them different. Because of that, sometimes people may not understand behaviors. They may not understand why the lack of social skills are there.”

Around the time of Cheyten’s diagnosis, Gambill learned about Extra Special People, the Watkinsville-based nonprofit organization that, since 1986, has served children and young adults with developmental disabilities. Gambill attended a holiday dinner hosted by the group. Because of the warm welcome she received at that meal, she and Cheyten joined ESP.

“It’s a community who understands what you’re going through and some of the worries and challenges you might be experiencing,” said Gambill, who is the coastal resilience specialist and a public service faculty member at the Marine Extension and Georgia Sea Grant, a public service and outreach unit.

ESP is one of the more than 1,100 charities that UGA faculty and staff can donate to during this year’s Campaign for Charities, “Shaping Our Future Through Giving,” which runs through Dec. 7.

ESP serves individuals with behavior disorders, cerebral palsy, Down syndrome, ASD, Asperger’s syndrome and other disabilities. ESP serves more than 300 families from more than 26 Georgia counties and helps participants from age 3 to those who are adults.

“We help people who need a little extra help to push through it and make their lives even better,” said Cheyten, who is now 12 years old, about ESP.

In addition to running weekend and after-school programs, family support programs and events throughout the year, ESP holds an eight-week program that includes day camp, overnight camp and field trips.

“For many of the families, that’s the only week of the year where they have respite,” said Gambill.

Additionally, many of the children have needs that a typical babysitter can’t meet, but ESP provides training for volunteers who attend their program.

“The parents know that their child is safe and being loved on and cared for,” Gambill said.

Cheyten has participated in the summer camp every year. During those camps, he has come to UGA to swim in Legion Pool, gone bowling and spent time at Camp Twin Lakes in Winder.

“In the summer, I like to swim at Legion Pool,” he said. “It’s hot outside, and then when you go in the pool, it cools you down. It’s so refreshing.”

“For most of the families there, this is the only outlet for their children,” Gambill said. “They can’t join clubs, after-school activities or sports. This is their only chance to socialize with other children and to be in a place where they’re celebrated for their differences, rather than feeling less than.”

Cheyten’s favorite sport is baseball, and in August, ESP announced that it partnered with The Miracle League, an inclusive baseball league comprised of neurotypical individuals and individuals with special needs. Their goal is to build a complex where participants from each organization can play together.

“The Miracle League is trying to raise money to do a wheelchair accessible field, where everyone from ESP and people with wheelchairs can get on the field and off the field easily,” Cheyten said.

Cheyten—who said that football and basketball are tied for being his second favorite sport—also enjoys participating in UGA’s Bulldogs and Buddies program. The annual event with football players and head coach Kirby Smart allows ESP participants to meet their favorite football team members and watch them practice.

Gambill said ESP has had a huge impact on the lives of her and Cheyten.

“It’s such a special place in the positivity and love that they give,” she said.