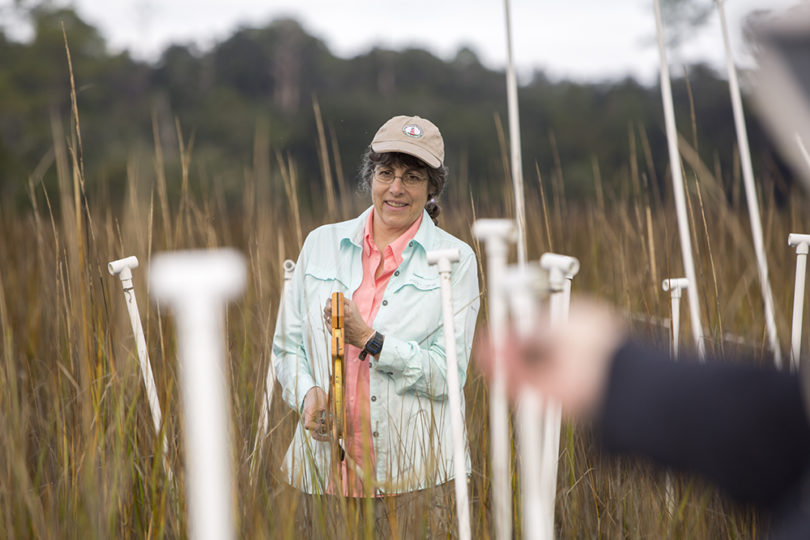 Georgia Coastal Ecosystems, a research program based at the University of Georgia Marine Institute, has just been renewed for another six years by the National Science Foundation with $6.7 million in funding.

The award marks the third renewal of GCE’s long-term ecological research, or LTER, grant from NSF and ensures that the group’s research will continue into its third decade from its base at the Marine Institute’s headquarters on Sapelo Island, Georgia. Established in 2000, the GCE studies long-term change in coastal ecosystems such as the saltwater marshes that characterize Georgia’s coastline.

According to Merryl Alber, Marine Institute director and professor of marine sciences in the Franklin College of Arts and Sciences, this next six-year chapter will focus on ecological disturbance—an appropriate theme for GCE-IV, since its home base at Sapelo has been substantially renovated after being flooded by Hurricane Irma in September 2017.

“There’s an irony of being a scientist studying these systems and then being subject to those same forces,” said Alber, who says the theme was nonetheless proposed before Irma did her disrupting last year. “When you look at an ecosystem, you can have a big event like a hurricane or a more local event like a tree falling. It disturbs that area, and then we watch as the area grows back. With global changes, we’re concerned that some of the things that cause these disturbances may be happening more frequently. So we’re trying to understand disturbances in a salt marsh, map them, quantify them, and understand they affect the ecosystem.”

“Because of the GCE-LTER being in place and creating contextual data, it’s easy for other scientists to come in and build on that information to ask additional research questions,” Alber said. “Other projects at the Marine Institute are by scientists who come here for the same reason we’re here—easy access to study sites on a barrier island.”

In addition to research, GCE also conducts outreach and education around coastal ecological issues. This includes working with state and federal agencies to promote science-based management of coastal areas. Among its educational activities, GCE produced a children’s book on salt marsh ecology that is now in its second edition.

“The Marine Institute has always been a leader and critical voice in coastal ecology, not just in Georgia but for the entire country,” said David Lee, vice president for research. “The research that the GCE does will only become more important as we adapt to shifting weather patterns and rising sea levels. I’m proud of what the GCE has produced in its first 18 years, and I’m sure its impact will continue to be felt for years to come.”