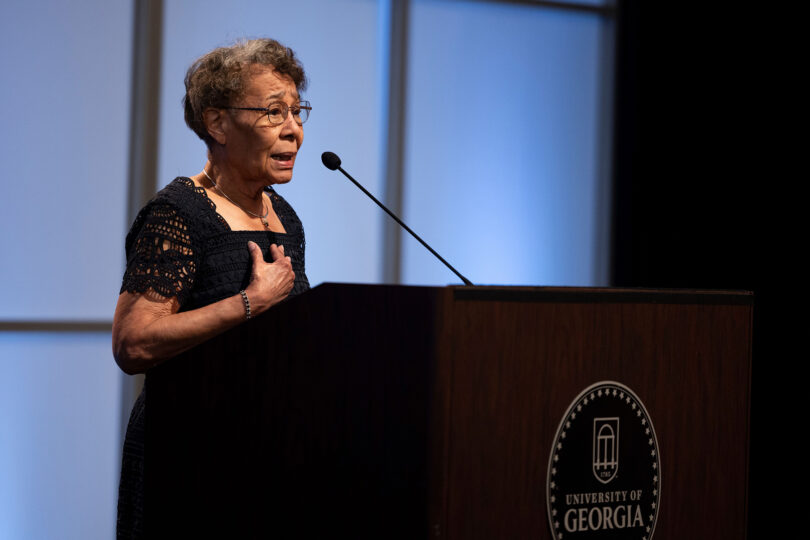 Mary Frances Early addresses the audience during a luncheon to honor her on the 60th anniversary of her graduation. (Andrew Davis Tucker/UGA)

Mary Frances Early, who became the first African American graduate of the University of Georgia in 1962, was honored with a luncheon on the 60th anniversary of the achievement on Aug. 16.

“Today we celebrate one of our most iconic alumni, a true trailblazer and most importantly, a dear friend to all of us,” said President Jere W. Morehead. “Ms. Early, as we begin this celebration, thank you for all that you continue to do to support the University of Georgia. Whether it is all of the kind notes that you send, the thoughtful calls that you make, the visits to our campus or the way you mentor countless students and alumni, we appreciate your extraordinary service to this institution. On behalf of the entire UGA community, we want to thank you for the impact that you continue to have on the University of Georgia.”

Early said that she came to the luncheon with her own sense of gratefulness.

“An attitude of gratitude has brought me here 60 years after my first degree. That, I thank God for,” she said. “I’m so grateful to share this significant day with you.”

In 1961, she decided to transfer to the University of Georgia when she saw the protests around Charlayne Hunter (now Hunter-Gault) and Hamilton Holmes, who graduated from the same high school as Early, being admitted to the university. She wanted to do what she could to help to integrate UGA and became the first African American admitted to the Graduate School.

Early acknowledged that things were difficult during her time at UGA in the early 1960s but that she “felt the need to actively participate in making things happen in Georgia.”

Early returned to UGA in 1964 to continue her education, earning a Specialist in Education degree in 1967. She went on to teach music in Atlanta Public Schools, serving as music director for the entire system. In 1981, Early became the first African American elected president of the Georgia Music Educators Association. After she retired from working in public schools in 1994, Early taught at Morehouse College and Spelman College and served as chair of the music department at Clark Atlanta University. 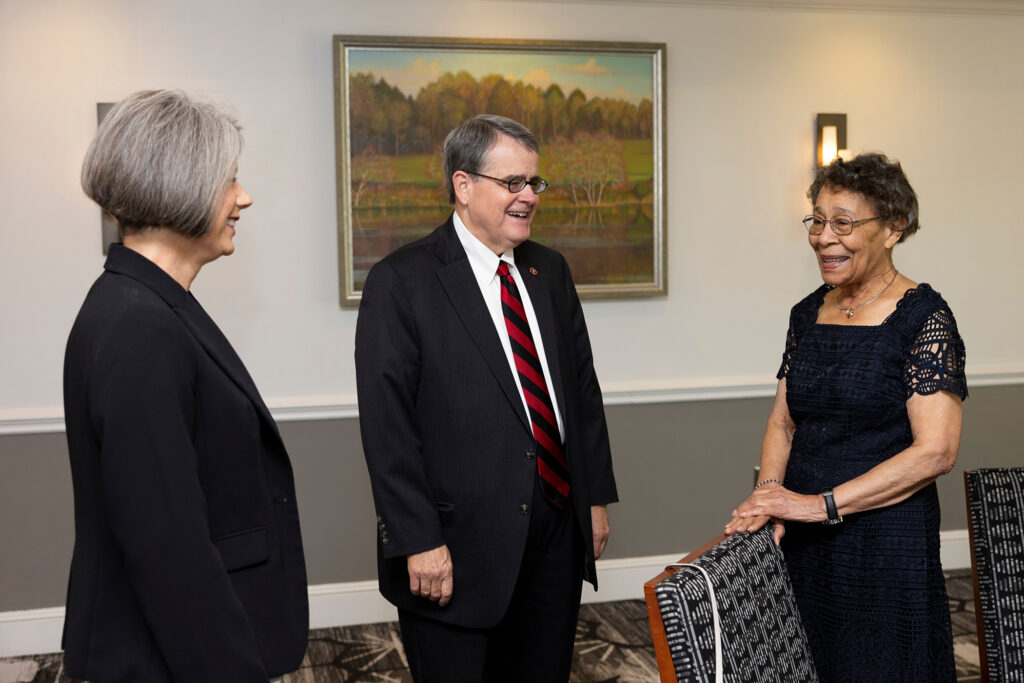 Mary Frances Early College of Education Dean Denise Spangler and President Jere W. Morehead talk with Mary Frances Early during a luncheon to honor her on the 60th anniversary of her graduation. (Andrew Davis Tucker/UGA)

In 2019, the University of Georgia named the College of Education in honor of Early, making her the first Black woman to have a college named for them at the university.

Early said she was pleased to see recognitions for all of those who contributed to the desegregation of UGA. She mentioned the recent dedication of Black-Diallo-Miller Hall, a new residence hall named for the first African American students to enroll as freshmen in 1962 and complete their undergraduate degrees at UGA, as well as the naming of the Holmes-Hunter Academic Building in 2001.

“I am so happy that they have been recognized,” said Early, speaking of Black, Diallo and Miller. “It makes the circle complete.”

Maurice Daniels, dean emeritus of UGA’s School of Social Work, who spoke at the ceremony, was one of the first to recognize Early’s significant contributions to the university, learning about her story through his research with civil rights lawyers in the late 1990s.

“We come on this auspicious occasion to celebrate the deeply inspiring story of Mary Frances Early—pioneer, trailblazer and even bridge-builder,” he said. ”This pioneer laid significant groundwork that helped change the course of history at our university, our state and indeed in our nation.”

Through the college named in her honor and the annual lecture that also bears her name, Early hopes her legacy and philosophy will live on.

“You teach us to be better. You teach us to be more. And you teach us to lean in to humanity—the humanity we all share—so that we can make this place and this world better,” Cook said. “That is the challenge for today. Let us lean in to our shared humanity as we all work to make the University of Georgia a more diverse, inclusive and welcoming place.”