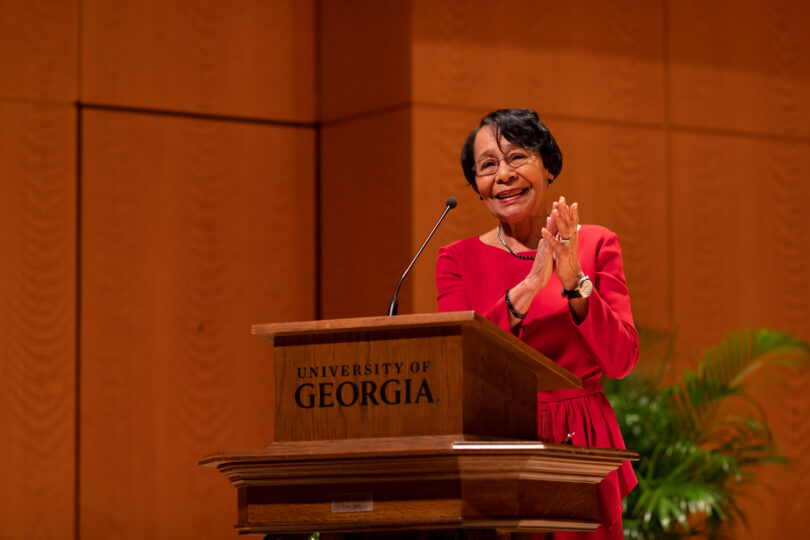 Reflections shared on the one-year anniversary of college naming

One year after the College of Education was named in her honor, Mary Frances Early celebrated virtually on a Zoom call with her friends and family along with Dean Denise Spangler and UGA President Jere W. Morehead.

On Feb. 25, she joined Phaidra Buchanan for a virtual conversation to celebrate the end of the University of Georgia Press’ Campus Read event. The conversation, moderated by Cynthia Dillard, Mary Frances Early Endowed Professor of Teacher Education, brought together the university’s first African American graduate and the university’s first African American Rhodes Scholar to discuss the past, present and future of a desegregated UGA.

“I want the University of Georgia to continue to move in the right direction, and I want to be personally involved in helping to make that happen,” Early said.

The University of Georgia Press, the New Georgia Encyclopedia, the Grady College of Journalism and Mass Communication and the Mary Frances Early College of Education hosted a Campus Read of An Education in Georgia by Calvin Trillin throughout February to celebrate the 60th anniversary of UGA’s desegregation.

Earlier that same week, Early participated in a virtual panel discussion with other Georgia Trailblazers sponsored by the UGA Alumni Association. The conversation, also in honor of the 60th anniversary of desegregation at UGA, included Chuck Kinnebrew, one of UGA’s football integrators; Mark Anthony Thomas, first Black editor of The Red & Black; and Christina Swoope Carrere, UGA’s first Black woman drum major. The discussion was moderated by Yvette Daniels, the first Black woman vice president of the UGA Alumni Association Board of Directors. Panelists discussed how they broke barriers, what it was like to be “the first” and how their experiences are connected.

“I hadn’t really thought much about being the first because that was not my objective in going to UGA. I wanted to help the civil rights struggle and particularly educational equity,” Early said.

For more on the 60th anniversary, visit desegregation.uga.edu.