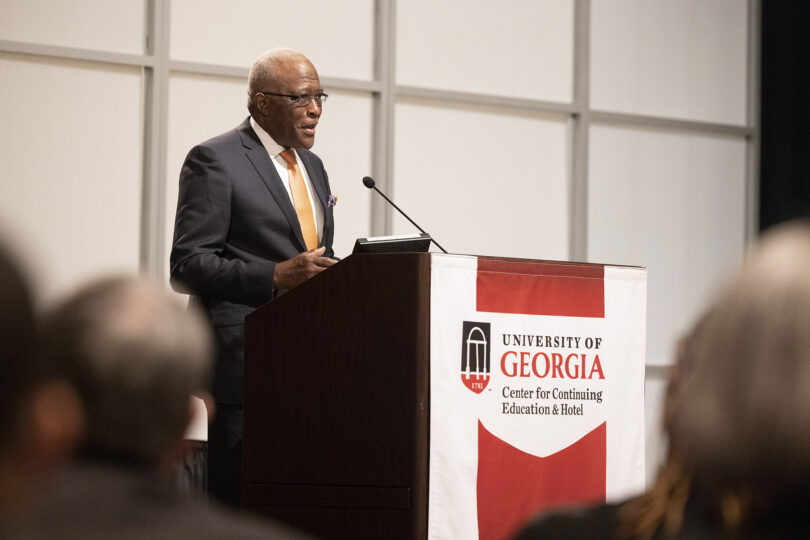 Robert J. Jones, chancellor of the University of Illinois at Urbana-Champaign, delivered the 2022 Mary Frances Early Lecture on Feb. 22. (Photo by Dorothy Kozlowski/UGA)

Sixty years ago, Mary Frances Early blazed a trail as the first Black graduate of the University of Georgia.

Robert J. Jones, chancellor of the University of Illinois at Urbana-Champaign, followed that trail years later and shared his experiences during the 2022 Mary Frances Early Lecture, held Feb. 22 in Mahler Hall at the Georgia Center for Continuing Education & Hotel.​​​​​​​

The lecture series honors Early’s legacy and recognizes her dedication toward making UGA an institution of higher learning for all people. It also strives to demonstrate the progress that has been made in achieving her vision as well as to identify the work that remains to be done.

Jones began by expressing how humbled he was to return to UGA for such an important event and shared how his time at the university shaped his life.

“My experiences here at the University of Georgia set the foundation for my career as a scholar, as a scientist and as a university leader,” he said. “The path that I followed here was mapped and paved by her courage, her perseverance, her commitment and, I have to add, her intentionality.”

Jones grew up in Dawson and earned a bachelor’s degree in agronomy from Fort Valley State University, a master’s degree in crop physiology from UGA’s College of Agricultural and Environmental Sciences and a doctorate in crop physiology from the University of Missouri, Columbia. His parents were sharecroppers, and he developed an interest in learning about peanuts and cotton as a young child.

It was his high school vocational agriculture instructor who inspired Jones to continue his education by calling him Professor, telling Jones that he would go on to college and making sure that Jones had the needed credits.

He met another mentor at Fort Valley State University who made sure Jones had a summer research internship. He encouraged Jones to pursue a master’s degree at UGA and eventually sent him with two fellow students so that they could rely on each other to stay on the right path.

Jones pointed out that not all of his experiences at UGA were comfortable in the early 1970s and added that those experiences likely paled in comparison to what Early faced while earning her master’s degree in music education in 1962 and her specialist in education degree in 1967.

“I shook those experiences off, and I packed them under my feet, and I used them to focus on the positive aspects of studying at this great university,” he said. “I think it’s important for everyone to understand the cycle of inequity and false opportunity that comes when we don’t recognize the lessons of the past and, worse, that we don’t take actions in our power to ensure that the mistakes of history do not become the burden of generations that follow us.”

“I believe that universities do become a driver for social change,” he said.

Also during the event, Graduate and Professional Scholars presented Sha’Mira Covington, a doctoral candidate and graduate teaching assistant in the College of Family and Consumer Sciences’ textiles, merchandising and interiors department, with the Mary Frances Early Scholarship. The Mary Frances Early Scholarship is given each year to a graduate or professional student who embodies Early’s courage and leadership.

“This, the 22nd year of the Mary Frances Early Lecture, reminds us that a committed individual who chooses to do a difficult thing for the good of the larger society can do just that,” said Michelle Cook, vice provost for diversity and inclusion and strategic university initiatives. “It’s important for us to learn from those who have come before us and have been successful in bringing about long-lasting, impactful and substantive change—change that matters; change that brings us closer to a more just, equitable and fair society; change that pushes us all to do better and be better.”