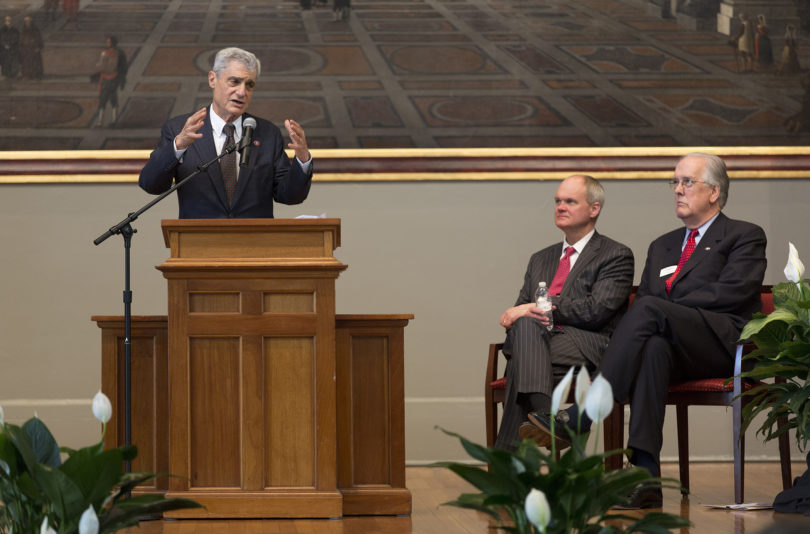 Athens, Ga. – Robert E. Rubin, co-chairman of the Council on Foreign Relations and a former U.S. Treasury secretary, called restoring effective government the “fundamental challenge of the future” for the U.S. during a lecture Tuesday at the University of Georgia.

Rubin, who spoke in the university Chapel as part of the Mason Public Leadership Lecture, said the loss of the American public’s faith in government could be devastating to the long-term success of the U.S. economy.

He called on students at UGA to be part of an informed and actively engaged electorate demanding more effective government.

Rubin served as Treasury secretary under President Bill Clinton from 1995-1999. He also is a former co-senior partner and co-chief operating officer at Goldman Sachs Group Inc., co-founder of the Hamilton Project at the Brookings Institution and author of The New York Times best-seller “In an Uncertain World: Tough Choices from Wall Street to Washington.”

With an impressive resume as a leader at the highest levels of public and private institutions, Rubin said a strong, market-based economy and a strong government with effective policy are both necessary ingredients for America’s success.

“There is a view, as you know, that markets and governments are antithetical,” Rubin said. “I think just the opposite. I think they complement each other.”

More effective government could lead to stronger economic success, he said. However, the current partisan gridlock is leading to government dysfunction and lost confidence in government by the American public.

This dysfunction has been building for decades, Rubin said, and there are various reasons political leaders have grown so divided, including loss of civility among members of Congress, gerrymandered districts and the rise of social media as a conduit for partisanship. All of this has eroded away bipartisanship and led to a system in which the two political parties agree on little.

Despite the troubling signs, Rubin was confident in the future of the U.S. because of the advantages of its diverse culture, existing rule of law, vast natural resources and intellectual capital.

“I’d rather invest in the United States than in any other major economy long term,” he said.

Rubin was optimistic that government dysfunction would be fixed over time. He encouraged UGA students to be part of the solution.

“I would strongly urge whatever you do with your career, at the same time engage in political and civic activities,” he said. “The country needs your involvement.”

“You’ll be contributing to the desperate need we have for effective government, and you’ll find the experience rewarding,” Rubin said.

The Mason Public Leadership Lecture is supported by a donation from Keith Mason, a Terry College of Business alumnus and a lawyer who has held various public service roles throughout the past 20 years. The lecture is part of the Terry Leadership Speaker Series.