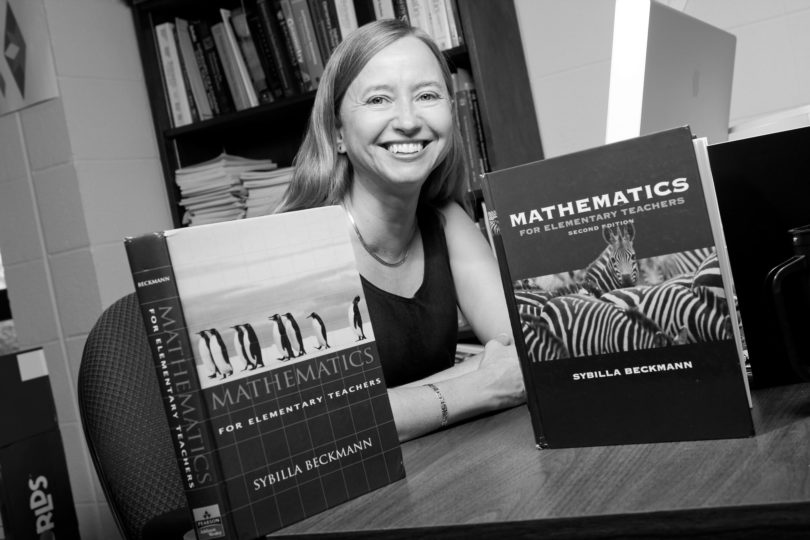 Sybilla Beckmann’s textbook Mathematics for Elementary Teachers has been rated as the best textbook in the nation in its field.

A few years back, math professor Sybilla Beckmann went back to school—to the sixth grade. A noted scholar in such a difficult area as algebraic geometry, she had a sense that for elementary mathematics education things just didn’t add up.

For some years, universities across the country have been engaged in the so-called “math wars,” pitting hard-edged theorists and scholars against the education establishment. Beckmann had more or less been in the former camp, but with the birth of her children Joey (now 18) and Arianna (now 15), she not only got involved in their math education, she began to look for common ground between the warring camps.

As a result Beckmann has become one of the most respected voices in America that bridges both sides of the war and has worked to bring them together for the good of students. Now, a recent ranking by an organization called the National Council on Teacher Quality has vindicated Beckmann’s passion and UGA’s place as a leader in the preparation of elementary math teachers.

Beckmann’s textbook Mathematics for Elementary Teachers was rated highest among all textbooks examined in the study, while UGA’s department of math and science education was listed as the only “exemplary” program in the study, while only nine other programs out of 77 examined even met basic requirements. (See story below.)

“Writing any textbook like this requires thinking about what will really be happening in the classroom,” said Beckmann, who is married to another UGA math professor, Will Kazez. “For prospective teachers to develop the reasoning and sense-making abilities of their future students, they must make sense of and reason about the mathematics they will teach.”

Beckmann taught one math class a day at Clarke Middle School in Athens for the 2004–2005 school year, and though the first edition of her book already had come out by then, the practical, hands-on time with an average class of sixth-grade students led to substantial changes that were incorporated in a major revision for the second edition.

The report ranking Beckmann’s book as the country’s best said that, in general, elementary teachers are poorly prepared by education schools to teach mathematics. The only shining light cited in the program was in UGA’s College of Education, and it’s no accident that Beckmann’s book is part of the curriculum used at UGA to prepare elementary math teachers.

“Of course kids have to know how to compute and know their basic facts,” Beckmann said in an article about the math wars in the journal Science in 2006. “But they also have to make sense of what they are being taught and explore the ideas with open-ended problems.”

Learning to explain mathematics is at the heart of her textbook and it helps explain why it has been successful and was ranked so high in the national report.

“Every math teacher knows that when we explain, we sometimes uncover our own lack of understanding,” she said. “It is only when we can explain a piece of mathematics in a way that makes sense both logically and intuitively that we feel we understand it.”

Beckmann has a chance this fall once again to take her theories to future teachers, when she presents the material in her book in Math 5001, a teacher-prep course with more than 100 students. So far, the book has proved extremely successful, and it is being used at such other places as Ohio State University and the University of New Mexico.

In the meantime, her respected work straddling the worlds of advanced research and elementary education has presented her with a problem not so easily solved: she’s now working on at least four new books and is in demand nationwide as an expert who knows what students stand to gain—and lose—if they don’t understand more than just how to compute.

“I feel like this book is making a difference,” she said. “I can’t tell you how rewarding it is to know I’m involved in a positive way with a serious national problem.”