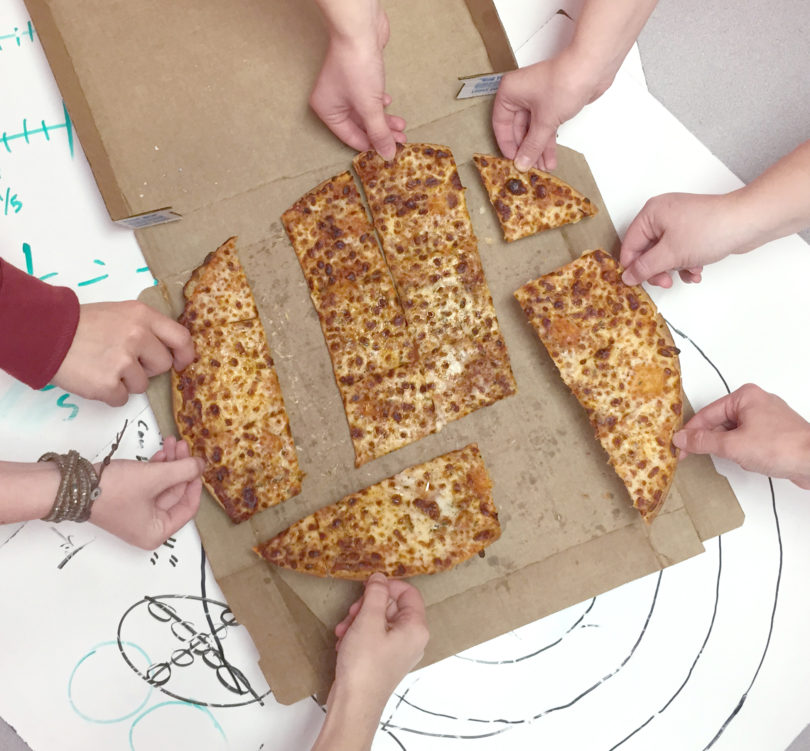 Students in professor Ryan Smith's mathematics education cohort pull apart a pizza during a class in advance of "pi day."

Athens, Ga. – For fans of numbers, March 14 is a holiday. But this year, it’s more like the Super Bowl, or hitting the jackpot in the lottery, according to University of Georgia mathematics education professor Ryan Smith.

That’s because the day otherwise known as “pi day” can be extended at least another two decimals thanks to the year-3.1415-and even more if you plan your party right, he said.

What makes pi special, Smith said, is that it’s an irrational number. This means it can never be written as a fraction-its decimals never repeat and they never end. As a result, it’s often just rounded to 3.14 and used to calculate circumferences and areas of circular shapes. To date, pi has been calculated to more than 2.7 trillion digits, which means that a “massive pi” day celebration on March 14, 2015, at 9:26 a.m. can experience the full range of the number, down to the trillionth of a second.

“How many days are dedicated throughout the year to mathematics?” Smith asked. “It’s kind of silly, but math is all around us, and this makes us talk about math. It’s a great event to have.”

While future mathematics teachers at UGA won’t be celebrating pi’s extended decimals this year-March 14 falls on the Saturday after spring break-a recent master’s program graduate of the mathematics and science education program in the College of Education will mark it in a special way. She’s planned her wedding for 9:26 a.m., with a reception from 5:35-8 p.m. and dancing until 9.

Her fiancé graduates from UGA this spring, but a pi-day wedding was an obvious choice for Jenny Johnson, a mathematics teacher who always celebrated the day in her classrooms.

“My dad lives in Utah, so then we’re doing a reception in Utah in June from 7-9,” said Johnson, who is returning to Athens for the event. “We managed to get 14 digits of pi into our wedding invitation.”

The event, which begins in Atlanta and finishes at a friend’s ranch in Covington, will include centerpieces devoted to different mathematicians and serve pies and pizzas. The men will wear pi cufflinks while the women will have pi necklaces. “We’re just trying to make it as mathy as we can.”

Johnson’s wedding is one more way, said Smith, that mathematicians wrestle with the issue of the value of pi. It’s a problem that has plagued civilizations for centuries. “It’s fascinating how ancient civilizations found approximate values for it, so different cultures developed it differently as well,” he said. “Pi day is also a way to celebrate how different cultures arrive at their version of pi.”