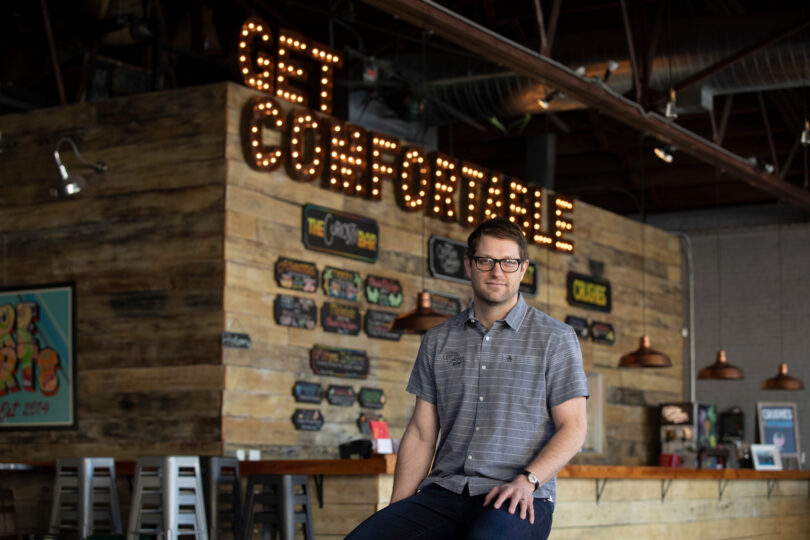 Matt Stevens AB '03, MPA '14 leads Get Comfortable, the philanthropic arm of the Athens microbrewery Creature Comforts. Get Comfortable raises money for select nonprofit organizations across Athens-Clarke County. Not even the COVID-19 pandemic slowed them down. In 2020, Get Comfortable raised a record $530,000 for its partners. (Photo by Peter Frey/UGA)

What can a for-profit microbrewery contribute to the well-being of its hometown?

Quite a lot as it turns out.

Creature Comforts was founded in Athens in 2014, and it quickly became one of the most popular and respected microbreweries in the state. One year later, the company launched its Get Comfortable campaign, which raises money for select nonprofit organizations around Athens-Clarke County. The campaign was so successful that in 2018 Creature Comforts created Get Artistic, which supports the Classic City’s creative scene.

Matt Stevens AB ’03, MPA ’14 leads them both, and the Athens native is dedicated to both his job and the city.

“This program starts with the observation that discomfort emerges whenever a need goes unmet. It could be hunger, housing, addiction, medical access. Whatever is most pressing that is ultimately what we want our focus to be,” says Stevens, who joined the company in 2017 as director of community and culture. In December 2019, he was promoted to vice president of strategic impact and now leads a staff of three.

“Get Comfortable is about helping our neighbors survive,” he continues. “Get Artistic is more about helping our community thrive. We think that those two pieces—surviving and thriving—are two halves of a whole, which together fosters a healthier community.”

It’s also very much on brand. An electric sign reading “Get Comfortable” shines brightly in the brewpub’s tasting room facing Hancock Street. “In the pub, you encounter the crossroads of humanity, and it’s a perfect place to find and engage your community,” Stevens says.

And Stevens knows a lot about this particular community. In addition to his two degrees, both of his parents graduated from UGA (and both his father and grandfather played football for the Bulldogs). Stevens worked for six years as associate director of UGA’s study abroad program in Costa Rica. He completed his master’s in public administration (with a concentration in nonprofit management) during that time.

In 2015, Stevens took a job as stewardship director for a local church. That introduced him to the intricacies of the community and set him up for an even larger role when he moved on to Creature Comforts.

“There’s just something about being headquartered in a college town,” Stevens says. “People move here by the tens of thousands in arguably the most pivotal season of their lives. They are determining who they are, the story they want to tell, and the legacy they want to leave. As their new neighbors, we hope to demonstrate that companies can serve as a force for good.”

“It’s a remarkable story because it represents generosity amidst extreme hardship, which in my opinion is when generosity counts the most,” Stevens says. “It’s not the story we would have chosen, but it’s a great story nonetheless.”