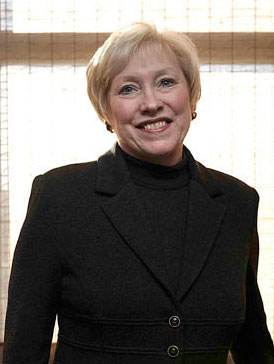 The chancellor of the nation’s largest and most comprehensive state university system will discuss the role of higher education in revitalizing the nation’s economy during the 22nd annual Louise McBee Lecture at UGA on Nov. 3 at 11 a.m. in the Chapel.

Nancy Zimpher, chancellor of the State University of New York, will deliver a lecture entitled “Educational Leadership in Tough Economic Times.” The lecture, sponsored by the Institute of Higher Education, is free and open to the public.

The McBee Lecture honors UGA’s former vice president for academic affairs and former state representative from Athens. Founded in 1989, the annual lecture series is one of the few in the U.S. that focuses solely on higher education.

Zimpher began her career as a teacher in a one-room schoolhouse in the Ozarks and now heads a state university system with more than 440,000 students on 64 campuses. She became the 12th chancellor of SUNY in 2009 and is the first woman to serve in this capacity in the system’s 60-year history. She was previously president of the University of Cincinnati, which improved its retention and graduation rates, student satisfaction ratings and national rankings under her leadership.

Zimpher notes that the current economic climate makes obtaining a college degree more important than ever. The poor financial condition of states, however, has led to diminished investment in public higher education, which compromises the ability of institutions to graduate students on time and limits their capacity as job creators. Zimpher argues that educators need to be more emphatic in explaining the immense return on educational investment for states. In her lecture, she will lay out the anchor role of higher education in the revitalization of the nation’s economy and describe the strategic actions that will allow institutions, and the nation as a whole, to reach their potential.

Zimpher has authored or co-authored books, monographs and academic journal articles on teacher education, urban education, academic leadership and school/university partnerships. She also chairs the Coalition of Urban Serving Universities Board; is a past chair of the National Association of State University and Land-Grant Colleges board of directors; and is a member of the National Board for the Fund for the Improvement of Postsecondary Education.

McBee was at UGA for 25 years, serving in a number of positions including dean of women, dean of students and acting vice president for academic affairs.