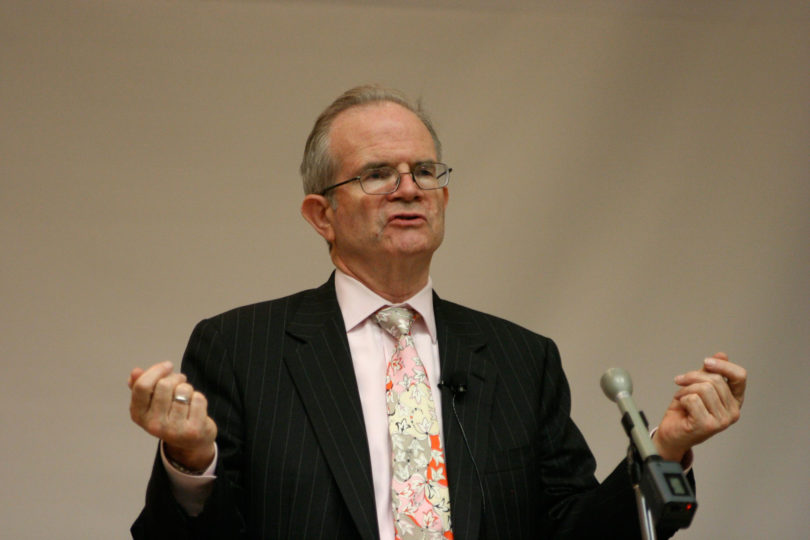 In his lecture, “Making Journalism Work in the Digital Age,” Steiger discussed how the technological revolution in journalism distribution and a related revolution in how journalism is financed are prompting new ethical challenges.

He identified four key issues facing journalism with the first being the increasingly blurred line between the presentation of fact and opinion. It’s not just a best practice, but an ethical imperative for journalists to distinguish between the two, Steiger said.

New forms of journalism such as blogs, Tweets, podcasts and curated links have made a journalists’ job more difficult because anyone can post information, whether true or false, fact or opinion.

A second ethical challenge can result when Web page items are published to solely drive page views, a practice Steiger said can lead to increased sensationalism and exaggerations online.

“The tension between the quest for audience, for page views and unique visitors, and the societal need for journalism of substance and civic importance is a real ethical challenge,” he said.

He compared newspapers and the Internet, saying that newspapers have to balance the obligation of telling the truth and maintaining an audience.

“If we create business models that depend largely on page views, we should not be surprised if they drive publishers to favor content with a high prospect of ‘going viral’ over content that is primarily thought-provoking, challenging, discomfiting or even educational,” he said.

A third set of ethical issues revolves around the business challenges the journalism industry is facing. With newsrooms in cost-cutting mode for at least five years, salaries and staffs have been reduced, benefits curtailed and pensions underfunded. Sections and beats have been eliminated, and pages slashed.

Hard choices must be made to preserve the public service mission of the press.
“We need to decide what to forego, and we need also to aim for excellence in what we continue to produce,” he said.

Steiger’s final issue dealt with the obligations of transparency that are being imposed on journalists and publishers. He noted that while the word can mean different things, journalists have an obligation to be as transparent as possible about the sourcing of their work.