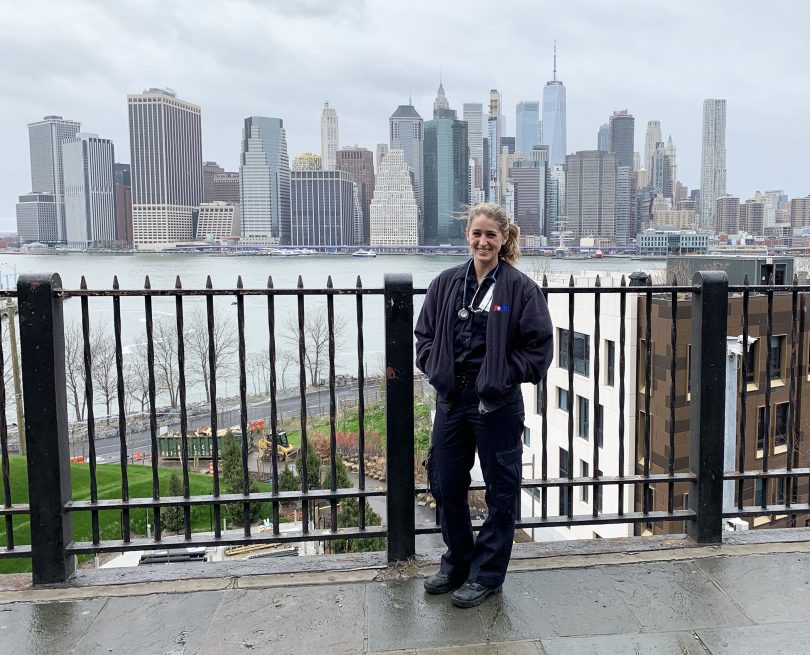 In the end, she says working in a ‘war scene’ was worth the long hours

When the COVID-19 pandemic began spreading across the country, medical students of all ages found themselves on the frontlines fighting the virus. From administering vaccines and tests to working in PPE during their rotations, students got a hands-on, unprecedented learning experience.

Maddy Wetterhall, a first-year student at the Augusta University/University of Georgia Medical Partnership, was working as an EMT running 911 calls in DeKalb County before starting medical school. When the pandemic hit and the Office of Emergency Management asked for volunteers who were able to be deployed with FEMA in early 2020, Wetterhall signed up and learned she would be deployed to New York City. 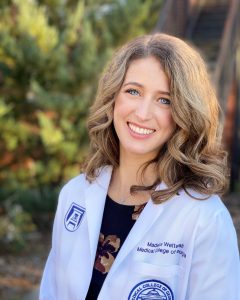 “We had no idea what to expect,” said Wetterhall. “We didn’t know if we would have to fly or drive up, if we would be living out of our ambulances, and we didn’t know what our role would look like up there. We knew we were going into the hot zone of an incredibly contagious virus. We knew it was dangerous and something that we could possibly die from, but as emergency medical care providers, that is what we do. We overlook that fear and go into emergency situations and try to help in any way that we possibly can.”

Wetterhall’s first weeks in the New York City were like nothing she had ever seen.

When she got to the city, she learned that the city’s 911 system was overwhelmed. Call volume was double the norm, which resulted in wait times of up to eight hours or more.

All EMTs were separated into different task forces to run 911 calls in the boroughs.

“The types of calls we ran varied any given day,” said Wetterhall. “We had many patients with COVID-19 symptoms, but the regular 911 calls such as cardiac arrests, traumas, chest pain, strokes, overdoses, didn’t stop because of the pandemic.”

On a normal day, 90% of calls to EMS are noncritical and 10% are critical, but Wetterhall said that all changed while she was there.

“In the state of emergency that New York was in, that statistic was flipped, and we could definitely feel that on the ground,” she said. “Many of the people who called 911 were scared to go to the hospital. Some waited too long to call just out of fear that they would have to go.

During her first weeks there, hospitals were overcrowded and overwhelmed, she said. “Critical patients who were intubated were in hall beds because there just wasn’t space. Refrigerator trucks were lined up outside and filling up within a few hours. In one hospital in Queens, I felt like I was like playing Tetris with stretchers of critically ill individuals, just trying to get to my patient. It truly was like a war scene.” 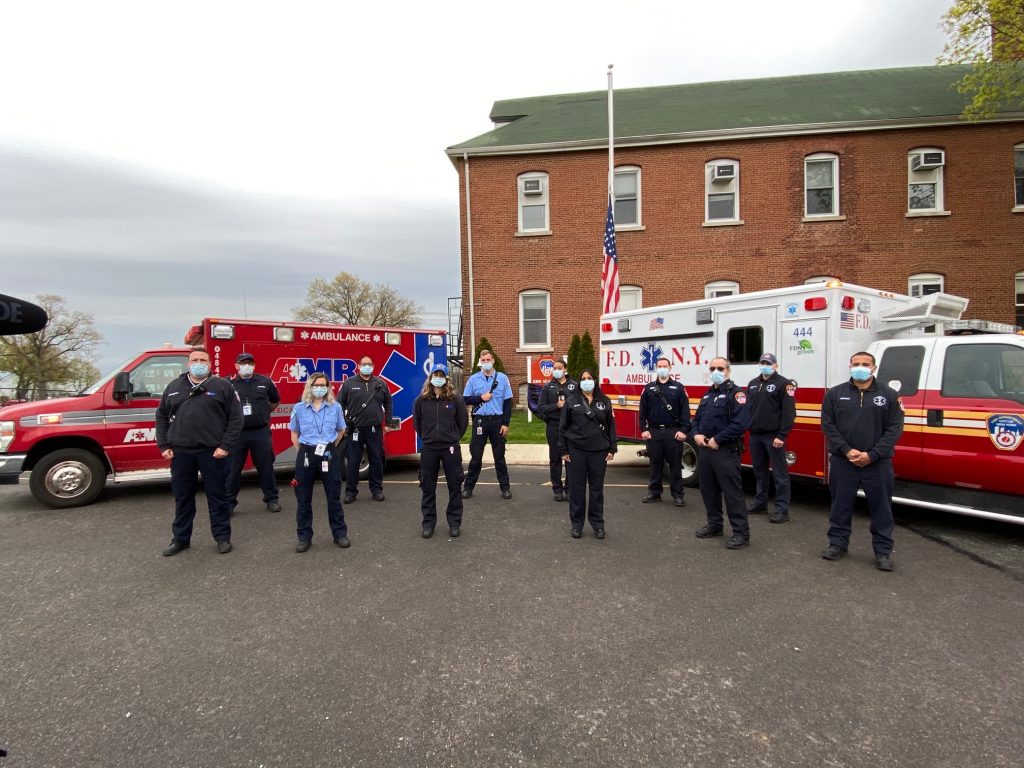 The mutual aid units that were deployed with FEMA from all over the country stand with members of the New York City Fire Department EMS. Maddy is wearing the baseball cap. (Submitted photo)

Even incoming calls that would normally require a simple fix were made more difficult due to the pandemic. Wetterhall and her fellow EMTs had to do some out-of-the-box thinking.

“My partner and I responded to an elderly man who was in dire need of dialysis but couldn’t get to his dialysis clinic because he was bedridden and the service that normally transported him was overwhelmed,” she said. “We knew that taking him to the hospital could mean a death sentence for him, but not doing anything could, too. As a solution, we ended up carrying him down five flights of stairs and putting him in a taxi with his daughter so he could get the help he needed while also reducing his risk of exposure.”

Wetterhall spent 50 days during March, April and May in NYC, and while she didn’t see much downtime, the end results were worth all the hours.

“We averaged 16- to 18-hour days, and in my 50 days there, I only had two days off,” she said. “By the end of my 50 days, hospitals started looking much better, and call volume was much closer to normal levels. It was really fulfilling to see the progress and know that our efforts had helped.”

With her feet back on the ground in Georgia, Wetterhall said her first year of medical school has been going well.

“I got my acceptance letter to the Medical College of Georgia just 10 days before orientation, and it’s been a whirlwind ever since. I definitely couldn’t have made it through this first year without the support of my family, friends and the incredible faculty here. It’s been especially rewarding to learn the pathophysiology behind a lot of the conditions I ran into on the streets, as well as learning what happens next,” she said.

Wetterhall said her time in New York helped her to prepare for medical school. “I was challenged every day to think on my own,” she said. “I learned to trust my instincts and my training, and I became more confident. In addition to getting firsthand clinical exposure to a plethora of different conditions, the entire experience also confirmed to me that I am in the right field and that I want to continue to help people in their time of need. When I’m starting to feel burnout from the constant studying, reminding myself about that helps me keep the big picture in mind.”

After getting a taste of excitement and the thrill of working as an EMT, Wetterhall said emergency medicine is on her list of specialties for the future, but she is excited to see what else may pique her interest.

“One of the things I most enjoyed about being an EMT is you get to know your patients in such a personal way. We are invited into their homes and meet their families, or we see firsthand the struggles they face if they are homeless,” she said. “It is such an honor and privilege to take part in some of the most intimate moments in my patients and their families’ lives. It brings me joy to know that I have helped, if even only a little, to make their day a little brighter.”

Wetterhall had the opportunity to take part in the fight against the virus again as a first-year student at the Medical Partnership.

“The most rewarding part of this year has been getting the opportunity to administer COVID vaccines,” she said. “It’s been great to be able to give people a little bit of hope and a reminder that there’s a light at the end of the tunnel.”